Akira Kurosawa’s Seven Samurai is an inspired film. John Sturges’ 1960 Western, The Magnificent Seven, which was based on Kurosawa’s film, is less so. Antoine Fuqua’s The Magnificent Seven, which is a remake of Sturges’ film, is less so again. The best of all examples of the Western are innovative, not derivative. It’s a wonderful genre of film for experimentation, perhaps because the Wild West lends itself to wild filmmaking. Fuqua isn’t a filmmaker that engages with inspiration and innovation. He is not a substandard filmmaker. He simply approaches every film with proficiency, and not much more.

Western films are notoriously unpopular in the contemporary pop culture climate, which makes lacklustre attempts at Western films more disappointing, especially when they enjoy the sort of widespread awareness that Fuqua’s The Magnificent Seven is currently enjoying. Fuqua’s Wild West isn’t the shot in the arm that the legacy of Ford and Leone needed. It’s not such a bad film, but it will almost certainly have an adverse effect on the health of the Western. For those naysayers of the genre it’s another film they can easily avoid. They’d be right.

The film follows’ Sturges’ original (which might not be quite the right word) moderately faithfully. Sturges’ The Magnificent Seven is a very entertaining albeit somewhat bland film, with a stirring and iconic central theme song by Elmer Bernstein. Fuqua’s The Magnificent Seven is meekly entertaining, powerfully bland and the music is neither here nor there. The plots of the two films are very comparable. A preposterously evil industrialist, Bartholomew Bogue, (Peter Sarsgaard) besieges a small mining town in the name of greed, slaughtering any townsfolk who have the nerve to challenge him. Emma Cullen (Haley Bennett), the grieving widow of one of the dead men, urges a roving bounty hunter, Sam Chisolm (Denzel Washington) to assemble a team to drive Bogue out of town.

It’s hopefully no surprise to learn that Chisolm manages to recruit six other men for the job, each with varying degrees of character depth and credulity as to why they join the team. Outside the seven central heroes, Cullen is also fundamental to the defence of the town. She is a strong female character. That’s not a good thing. A female character that happens to have strength, such as Charlize Theron’s Furiosa in Mad Max: Fury Road, is a far more beneficial and appealing addition to a film than any of the laboured female characters that have enjoyed a recent rise in cinematic prominence with which filmmakers believe they are representing woman favourably. Furthermore, any good intentions on Fuqua’s part are undone by costume design decisions that draw attention to Haley Bennett’s breasts. Similarly, it’s wonderful that over half the magnificent team of heroes are not white but it’s not so wonderful that the asian, the Mexican and the native American members of the seven have almost exactly zero depth between them. 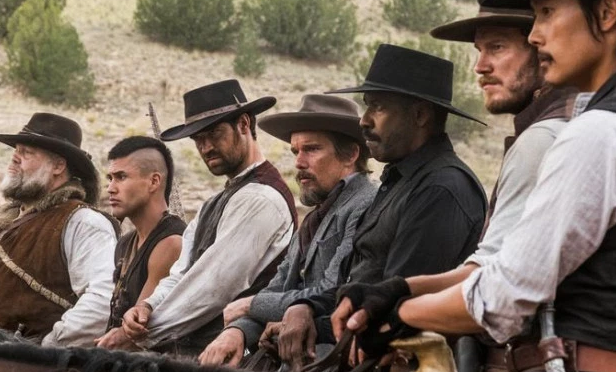 There’s a gunfight in the film because even though it would be brave filmmaking to produce a Western without a gunfight, the fact of the matter is that we want to watch cowboys shoot things. We don’t want to watch cowboys shoot things as much as they do in Fuqua’s The Magnificent Seven. During the inevitable showdown, enough bullets are bandied about that they become inconsequential. In Sergio Leone’s For A Few Dollars More there is a gunfight between Gian Maria Volontè‘s El Indio and an innocent man. The men can fire when the music from El Indio’s music box has finished. A single bullet is fired, and there’s more to it than all of the thousands that are fired in The Magnificent Seven put together.

The Magnificent Seven is exceedingly watchable and exceedingly forgettable. The film’s only crime- unless unimaginative filmmaking is also a crime – is to hinder a variety of film that didn’t need any help in its lack of popularity. For all of the problems of Sturges’ film, there was something quite magnificent about Yul Brynner, Steve McQueen, James Coburn, Charles Bronson and co., braving the odds in the defence of a defenceless village. Fuqua and his team may have the wrong adjective for this remake. “The Normal Seven” just doesn’t have the same ring to it.