Optimism has become something of a rarity in film. Perhaps because it’s easier to make us cry than laugh or  because the greater part of the cinema industry is business disguised as art. Either way, over the past century, there have been few films that truly inspire life affirmation. Ben Stiller’s new film The Secret Life of Walter Mitty doesn’t quite reach the same encouraging heights as the greatest of life-affirming films, such as Frank Capra’s It’s A Wonderful Life, though it’s undeniably refreshing to see unabashed optimism in the largely cynical business of filmmaking.

Based very loosely on the 1939 short story by James Thurber, The Secret Life of Walter Mitty follows the largely inactive Walter, who daydreams wildly as a surrogate for real adventure. As the head of the negative assets department for Life Magazine, Mitty is tasked with the job of retrieving ‘negative 25’ for the final printed cover. The mysterious negative is boasted to exhibit the quintessence of life but has inexplicably disappeared from Mitty’s grasp. Spurred on by his desire to impress a female co-worker, Mitty sets off on a globetrotting mission to locate the source of the negative – the elusive photographer Sean O’Connell.

Perhaps the most affecting of optimistic films are the ones that seek out brightness amongst the dark, such as Capra’s aforementioned classic or Frank Darabont’s The Shawshank Redemption. Stiller’s Mitty tackles corporate employment in lieu of suicide or incarceration, and it attacks the lifestyle with broad strokes. The Secret Life of Walter Mitty is not a subtle film, which sometimes hinders potential emotional impact, but for the most part the overstated style supports Stiller’s ambitious scope. 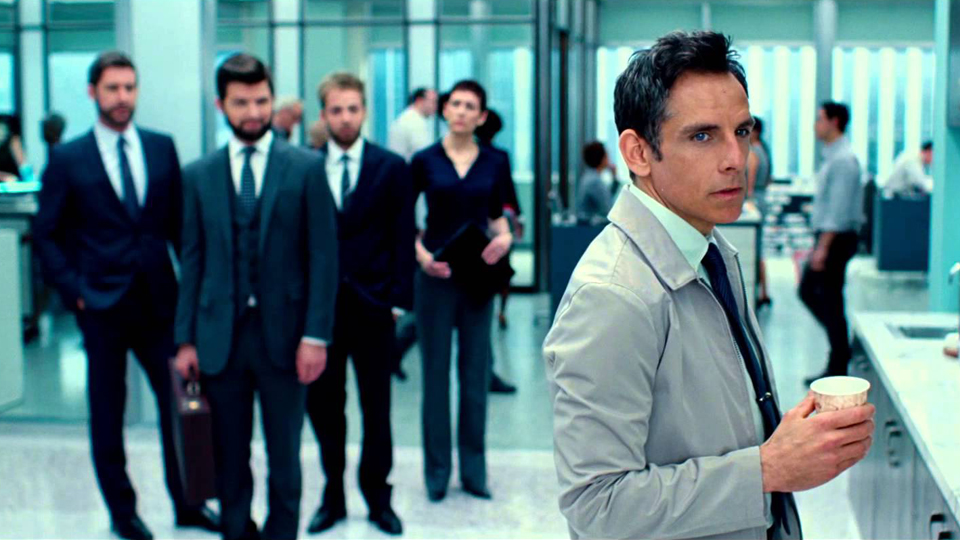 The message here is unmistakeable. Mitty works for Life Magazine, which was founded in 1883 and over the centuries has expired and reappeared in a number of different carnations. The magazine played no part whatsoever in Thurber’s original short story, although interestingly enough it was the publication to which Thurber wrote to complain of the first cinematic adaptation of the tale. The magazine, and in particular the photos taken by renegade photojournalist Sean O’Connell, seem to promote the mysterious beauty of life. Unfortunately the buck stops at the swarm of callous  bosses, who are shutting down printing in favour of an online presence.

The increasing dominance of the internet as an alternative for personal interaction plays an integral part of The Secret Life of Walter Mitty and indeed Mitty’s own personal progress – particularly in the romantic subplot involving Mitty’s interest in co-worker Cheryl. The film has firm ideas regarding the benefits of immediate experience, and suggests that it’s an aspect of our lives that is becoming increasingly antiquated, which is probably true. Unfortunately, Mitty is so absolute in its beliefs, it never opens itself up to thoughtful discourse.

Stiller has come a long way since I first encountered him in the 1995 children’s comedy Heavyweights. His command behind the camera has become increasingly apparent, but it’s the visual creativity of Mitty that impresses most. Each frame alludes to the art in every day life, something the film obviously holds in the highest regard. The Secret Life of Walter Mitty is an ambitious film for Stiller, who is mostly known for his work in straight-forward comedy. There’s something pleasant about a film that wears its heart on its sleeve like Mitty does. Unfortunately, the film lacks a sense of reality that’s needed to keep us invested in Mitty’s adventures. The film is pro-life, but everything Mitty encounters, even outside his daydreams, is too fanciful to truly reflect real life.