A highschooler isn’t the first socio-economic model that springs to mind when you think of alcoholism. Perhaps because there are enough kids in their late teens abusing drinking that an alcoholic might slip right under the radar. Or perhaps because our public perception of alcoholism always conjures up the same image; middle-aged, strung out, alone. All the best films about alcoholism share this character; Leaving Las Vegas, Days of Wine and Roses, Bad Santa, Barfly – none of the protagonists enjoy the fortune of youth. Sutter, the young man at the centre of James Ponsoldt’s The Spectacular Now is a young man cruising through his last year of high school. He’s the life of the party. He’s also an alcoholic.

I could probably count the scenes in which Sutter doesn’t have a drink (he hides alcohol in a cup of soft drink) on one hand. He says at one point that his father, who has since left, gave him his first drink during one of his little league baseball games. His father isn’t the only reason Sutter became an alcoholic, but he’s a factor. A lesser film might have been heavy handed when dealing with why Sutter is how he is. The Spectacular Now treats Sutter’s relationship with his father admirably.

The advertising campaign and the slightly misleading title, which I appreciate much more since seeing the film, would have you believe The Spectacular Now is a warm-hearted look at relationships and life during the final years of high school. To a point, it is, but high school is certainly not the focus of Ponsoldt’s film. The moments we see in the trailer where Sutter yells to everybody at prom that he loves them might be a heartwarming moment in another film. Here it comes off as sad. When we suddenly realise where the film is going it’s slightly startling, so unexpected is the shift in tone.

All the staples of a high school romance film are there. Sutter (a fantastic Miles Teller), having recently broken up with his dream girlfriend after a misunderstanding, binge drinks and is awoken the next day by Aimee (Shailene Woodley). She’s on her neighbourhood paper round and he has passed out on a stranger’s front lawn. 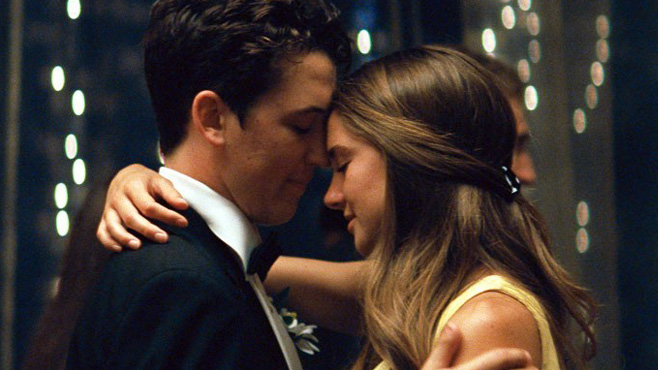 They hit it off immediately and recognise the connection. Aimee is obviously interested in something more, Sutter probably isn’t. But he’s drunk and jealous of his ex’s new boyfriend, so the next time they hang out he readily advances their relationship. But a deeper connection is made. There is physical attraction no doubt, but it’s not at the heart of their friendship, especially not for Sutter. They really want to help each other have better lives.

The performances are all great. The legendary Bob Odenkirk and Kyle Chandler turn up for short supporting roles as two vastly different influences in Sutter’s life. But it’s the two lead actors, who thankfully don’t look like thirty year olds playing high schoolers, who dominate the film. The relationship between Aimee and Sutter would not have worked if it wasn’t for the fantastic performances from Teller and Woodley, who convincingly sell a story that’s quite atypical for their high school environment.

Sometimes the most accurate films are also the most difficult to watch. The Spectacular Now is, in a way, hindered by its spot on portrayal of teenage life. I may be on my own on this one, but I spent so much of the film cringing. Perhaps because I’ve been in those situations or because I’ve talked like that. The Spectacular Now doesn’t romanticise the horrendous awkwardness of adolescence. For so much of it, high school is a brutal maze of graceless embarrassment.