It’s come to a point where all of the superheroes and their corresponding movie franchises tend to meld into one muscly, other-wordly, cape-y mess. Hero, bad guys, lady-character – we get it. And even those seemingly invincible Avengers folk aren’t immune; for the first three-quarters of Thor: The Dark World, I was bored out of my mind. This film offers nothing new in terms of what we’ve already seen, and it makes no effort to separate itself from the mass of superhero films out there already.

Basically, Thor’s back in Asgard keeping the peace, while his villainous brother Loki sits pretty in jail. OBVIOUSLY this isn’t going to last for long, because some funky Prometheus-looking dudes who speak a combination of Elvish and nonsense – I’ve never understood why in Superhero movies, everyone but the bad guys seem to speak English – are plotting to take over all of the 9 realms when they overlap, which just so happens to be soon. At the same time, Jane (Natalie Portman – I’ll get to her later) just so happens to be conveniently in the exact location on Earth (London, wouldn’t you know?) where a portal to their secret weapon, ominously named “The Ether”, is kept. One thing leads to another, she gets infected with The Ether, and Thor has to whisk her away to Asgard to keep her safe/save the world. 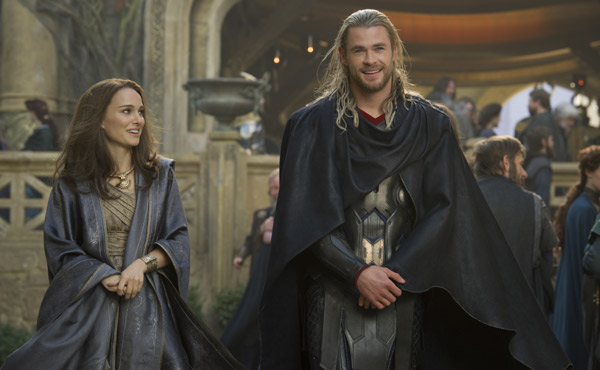 I read a while ago that Natalie Portman tried desperately to get out of the contract that made her be a part of all upcoming Thors and Thor-related things, and her performance in this film makes that absolutely apparent. Her involvement is cringe-worthy at best, and the makeup department have splashed so much of it on her face that it’s almost like they were desperately trying to cover up her obvious lack of emotional involvement. Jane serves no real purpose in this film apart from being the damsel in distress – she spends majority of the film having weird abstract fits where the red, liquid-y Ether spills out of her in slow-motion (it really looks remarkably like a high-budget Revlon lipstick ad), or lying down in defeat. Her uselessness to the plot of the film is actually embarrassing – she is purely there to check the “love-interest” box, and that’s about it. It could have been anyone to carry the Ether, and just because it’s Jane doesn’t mean the audience cares any more about it.

Inevitably, a large battle ensues between Thor and the baddies – this is actually the only mildly interesting part of the film. Loki and Thor are forced to team up in brotherly fraternity in order to protect their home (although since when did Loki give a shit?), and there’s some excellent twist and trickery work here which went down a treat. However, it wasn’t enough to save the film. The film’s strongest parts are those that play with the interactions between characters (Loki and Thor, Kat Dennings’ character with Jane, Skarsgard with the two girls etc), but this isn’t the “point” of the film. Overall, it’s unsatisfying and so grand in scale without explanation that it’s almost nonsensical. I’d wait for the DVD, if you have to.