Kiyoshi Kurosawa’s Tokyo Sonata is heart-wrenchingly beautiful. I cannot think of another ‘slice of life’ film which has been handled with the same level of elegance and sensitivity that Kurosawa has invested in this critique of metropolitan Japanese life.  In as much as it is raw and emotional, it is as graceful and refined. In as much as we are offered deep insight into each character, we are equally detached and removed. It is this emotional conflict that Kurosawa places upon his audience as he exhumes the hidden disorder that exists within Japanese society; the struggle between humanism and social propriety.

The film observes a middle-class family living in Tokyo, the Sasakis, which consist of father Ryuhei, his wife Megumi, and their two sons Takashi and Kenji. Their life appears simple, ordered and slightly mundane. However, soon Ryuhei is fired from his office job (an extremely prestigious job in Japan) in favour of cheaper labour from China, consequently triggering the slow disintegration of the Sasaki family.

Out of utter shame, Ryuhei will not disclose the reality of his situation to his family. Instead we watch him scrupulously struggle to hold up a façade of normality whilst the former business manager attends a daily soup kitchen and a welfare office for spats of work. If you’ve ever spent any time in Japan or understand its culture, then watching Ryuhei scrambling to hold up this charade whilst suffering under his humiliation and inner turmoil is honestly painful to witness. Ryuhei’s predicament forms the foundation of the film. It is the catalyst which triggers a chain reaction through the rest of the family as each member seemingly struggles with the same affliction: the inner conflict between the human-self and the societal decorous self.

As a result each family member begins to detach and disassociate from one another falling further into their own inner turmoils. Some excellent camera work and clever use of (or lack thereof) music evoke the increasing isolation felt by his characters. Kurosawa manages to shoot Tokyo in such a sterile yet elegant way. The city feels hollow, almost unreal in some scenes lending to this detached feel that grows throughout the film as we, the audience, increasingly become the silent observers peering into the personal and social lives of each family member. 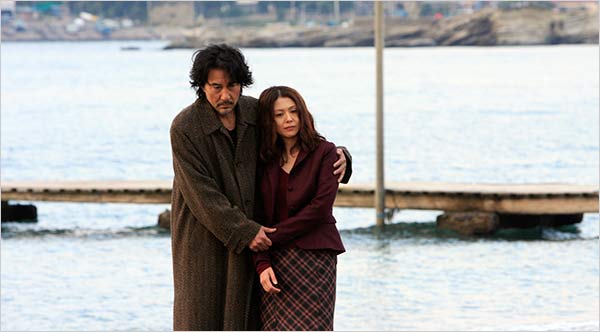 Takashi, the eldest son in his early twenties, feeling increasingly disillusioned with the current state of japan and his place in the world decides to enlist in the US army to ‘protect’ his nation. Mother Megumi, bereft of affection from her husband, and anxious over the decrepit state of her family, hopelessly attempts to hold the household together whilst increasingly questioning whether there is anything more to life. Kurosawa will make you feel helpless at these times. You’ll wish you could just do something to help each characters and the family’s situation as a whole.

In his familial detachment, Kenji the youngest son, a curious young teen, begins to question the seemingly natural order of social relations. Not identifying with or succumbing to the social expectations placed upon him in school, Kenji’s curiosity is caught by music, the piano. Despite his father’s disapproval, he becomes fixated on it. It enables him to transcend the mould of conformity. We see its cathartic nature offer Kenji respite from a deeply troubled home and provide and outlet for his hidden concerns. Gradually, he develops a strong relationship with his piano teacher Miss Kaneko, who urges him to pursue his musical ambitions and audition for an academy.

However, things do not improve in the Sasaki household. Through a series of events, and not giving too much away, crisis strikes the Sasaki family. Each member is thrown into mental and emotional disarray as they face the very nature of their existential being. ‘What it is to be oneself’ and what indeed ‘what oneself is’ is thrown into question as the family emerges on the other side of their crisis, changed indefinitely.

If you only ever see one Japanese film in your time, I implore you make it this one. Tokyo Sonata is truly beautiful. It’s one of those films that will make you consider what’s most important in life, achieving this in a way that is not uncomfortably intrusive, or confronting or vulgar, but rather in a way that is both graceful and precise. It is films like these that demonstrate the wealth of Asian cinema.