"Since the start, the two have engaged in an eternal game of comedic oneupsmanship, with their duelling impersonations of the same famous actors being their primary ammunition."

"There’s a point one wonders what is gained by yet another essentially interchangeable collection of the same scenes. "

As I was watching The Trip to Greece, it occurred to me to go on my phone to check on Steve Coogan’s age. Seemed in keeping with a series of films in which an underpinning theme is aging and mortality. (For the record, he’s 54.) On Wikipedia, I noticed that when you type in “Steve C,” the first results you get on the autocomplete are Stephen Colbert and Steve Carell. In fact, you have to type the second “o” in his surname before Coogan leap-frogs the others to become the top choice. 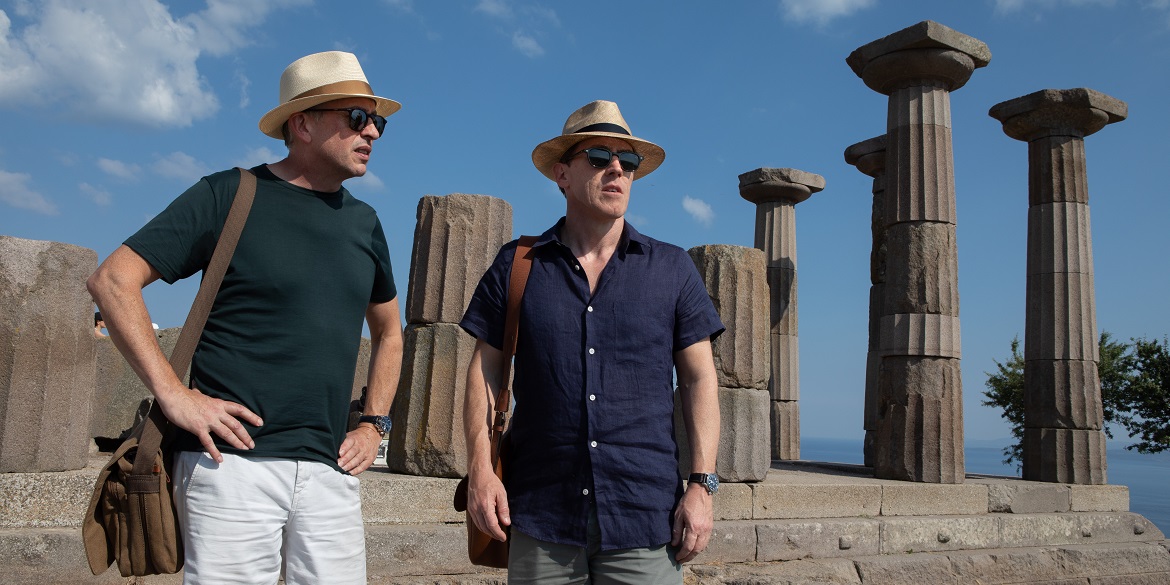 It’s just the type of thing that would royally piss off Coogan, at least, the lightly fictionalised version of Coogan that’s been appearing in these films since 2010. I could even hear, in my mind, his rant about it. “The fact that Stephen Colbert should come ahead of me is just ridiculous. He isn’t even known by the name ‘Steve,’ yet he comes up before me. And Steve Carell? No one would even know who he was if he hadn’t played a role a British comedian made famous first.”

What would get his goat even more was that when you type in “Rob B” to bring up the name of his long-time collaborator, rival, and series co-star, Rob Brydon, Brydon himself is the first to appear.

This is when it occurred to me that I have spent entirely too much time this past decade with Steve Coogan and Rob Brydon.

I don’t normally like to use the first-person singular in my reviews, nor indulge in personal anecdotes, but with a series of films that focuses on the solipsism of its main characters, it seems appropriate. It’s really Coogan who is so self-absorbed, at least as the actor has chosen to portray this lightly fictionalised version of himself. The Trip to Greece is yet another opportunity, the fourth, to see this version of Coogan first introduced to us back in 2010’s The Trip, which started its life as a British TV show, where he and Brydon toured a particular country – in that case, their own – consuming fine dining along the way. Since the start, the two have engaged in an eternal game of comedic oneupsmanship, with their duelling impersonations of the same famous actors – most notably, Michael Caine – being their primary ammunition.

Except to this version of Coogan, it’s not a game. This Coogan is crippled by insecurity and self-doubt, even though he is inarguably the more famous of the two. He’s constantly mentioning his positive critical notices and the BAFTAs he’s received, while surveying the threat posed by a happy-go-lucky Brydon out of the steely corner of one eye. This Brydon, on the other hand, is just happy to be here. He’s never met an opportunity to do a bit he didn’t like, and though he tries to beat Coogan in everything from impersonating Mick Jagger to swimming across a Grecian bay, there’s no underlying malice to it. He’s so sweet natured that he’s nearly a simpleton, especially next to Coogan’s thinly veiled acerbic self-loathing. 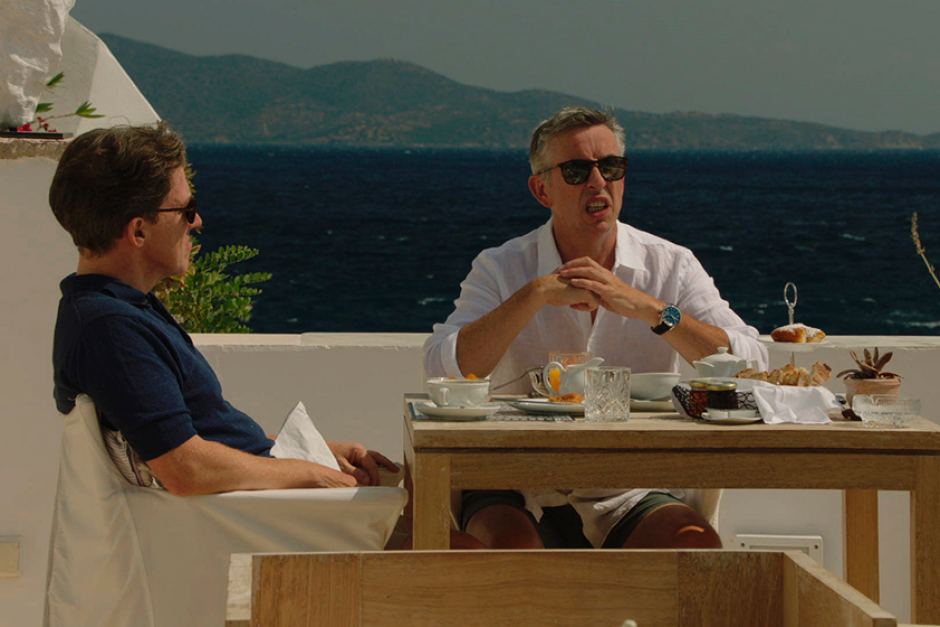 It’s so easy to describe their core characteristics because this essential dynamic has not varied since the first movie. In fact, in a way, only the locations have varied. Greece is certainly a picturesque one, but not significantly more so than either of their last two destinations, Italy (2014) and Spain (2017). In celebration of these ten years of Trip movies, their actual movements retrace the ten-year journey by Odysseus in the literature of antiquity.

There’s a third collaborator here who should not go unmentioned. That’s director Michael Winterbottom, who has among the most varied filmographies of any director working today. You might say he’s never made the same movie twice, with the glaring exception that he has now made the same movie four times. Or possibly even five, if you consider that he first made a film featuring Coogan and Brydon as fictionalised versions of their real selves with 2005’s Tristram Shandy: A Cock and Bull Story.

There are probably any number of reasons the three of these guys want to keep making Trip films, and it doesn’t just have to do with self regard. Indeed, Coogan and Brydon have some of the best comic chemistry of any personalities working today, and they are still both incredibly funny. They seem to fancy themselves today’s answer to Hope and Crosby or Martin and Lewis, and they’re probably not wrong. It’s not just the impersonations – in fact, in this film, it may particularly not be the impersonations, as in one scene they do Marlon Brando, one of the most cliched impressions of all time. No, they have an intuitive sense for each other’s comic instincts that is usually only found in long-time members of the same improv troupe. One can immediately see where the other is going with a joke and jump straight in with the next logical progression, without missing a beat.

But there’s a point one wonders what is gained by yet another essentially interchangeable collection of the same scenes. Winterbottom’s approach is as unvarying as theirs. The two sit and lightly pontificate at seaside tables, casually inserting sick burns as Coogan tries to show off his intellect by reciting historical facts about the region, and Brydon just looks for the next chance to impersonate someone. Quick insert shots show random sous chefs arranging food on plates. Coogan and Brydon eat the food, always accompanied by wine. Then they drive somewhere else. Then they have phone calls to loved ones back home. Wash, rinse, repeat. 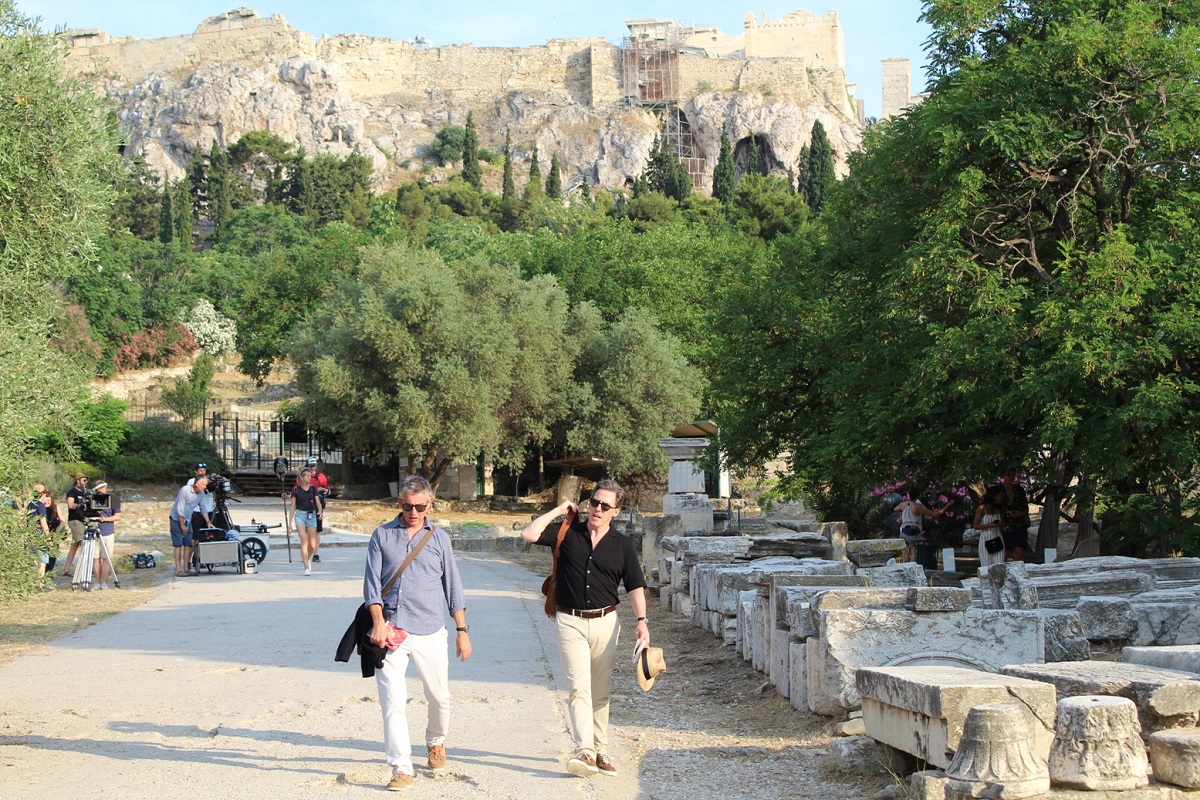 What makes this approach slightly frustrating is that the end of the most recent movie, The Trip to Spain, teased something that might bust way out of this format. In the climax of that film, Coogan decides to cross the Mediterranean to Africa. The film ends on him hitchhiking down a desert road, approached by a truck full of what appeared to be radical Muslims toting machine guns. The cliffhanger ending left us to believe that something seriously untoward might “happen” to this version of Coogan, and to wonder how they might handle that in the next film.

How they handled that was: barely mentioning it at all. There are brief references to Coogan “disappearing” for a short time, but the experience appears to have left him largely unchanged. Time for the next plate of grouper drizzled with some delectable-looking sauce.

Coogan and Brydon have stated that this is the last trip they will be taking. Knowing that saves it from being just another chapter in a potentially unending series, especially given how the film ends. Without giving anything away, something happens that mirrors an affecting real-world occurrence in one of their lives, and it suddenly shifts the tone in a surprising but effective manner. The strings of Max Richter’s “On the Nature of Daylight,” which graced some of the heavier moments of Denis Villeneuve’s Arrival, even accompany this denouement. 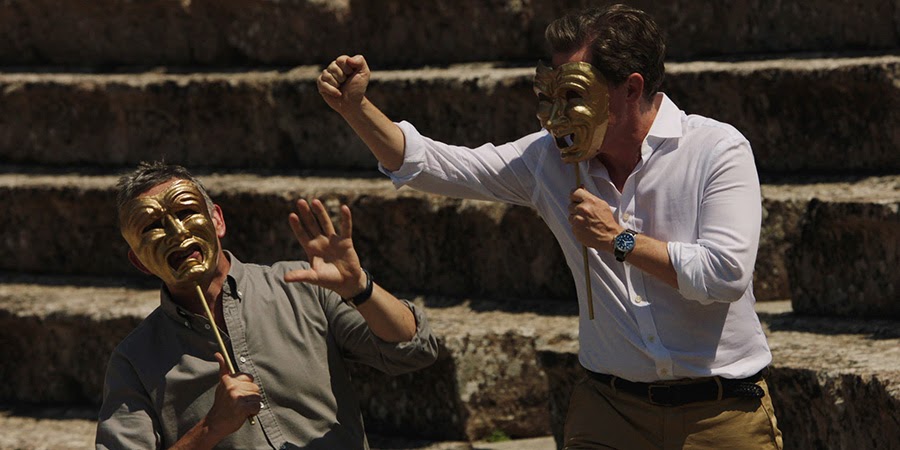 Ending the way it does makes a person – me, let’s say – realise that the flip side of self regard is self exploration. As much as Coogan takes the piss out of himself over his own obsessions, it’s clear he’s giving us a version of himself that is, in its own way, radically real. He probably is actually shallow in the ways he conveys here, worried that we may not like him enough, worried that he’s growing old. As with most comedians, the jokes often hide real pain. So somehow, miraculously, this long, not-so-strange, trivial trip ends somewhere deep with feeling, cutting through all the silly voices and laughter to something genuine.

The Trip to Greece is available for digital rental on multiple platforms from 3 June.