I don’t really like zombie films. In fact, I quite dislike zombie films. I tend to bypass them at my local video store and head straight for the French art-house pornography, and steer clear of most movies ending in “Of The Dead”. Sorry George A. I just can’t seem to stomach people’s stomachs being ripped apart. But a zombie film with heart?

Of all the bodily organs plundered from the chests of the poor, innocent extras in these gore-fests, the heart never features all that prominently. There’s usually a pool of blood, a smattering of brains, and a pound of flesh that would make Shylock proud, with the much loved “intestines ripped out of the carcass” money-shot thrown in when it’s absolutely crucial to the plot. So what makes Jonathan Levine‘s new zom-rom-com so different from its predecessors? Well, it skips the jugular, and goes straight for the heart! 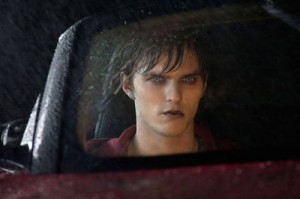 If you’re a true fan of the un-dead, and revel in all the bloody havoc they cause whilst unable to move faster than a tractor, you might find yourself sorely disappointed by Warm Bodies. It’s M rating means that the “meal time” scenes have been kept relatively savoury, and come and go within the first 15 minutes of the film. If you want blood, buy the AC/DC album. But if you want a zombie film that taps into the human side of this often formulaic genre, look no further than this surprisingly feel-good outing.

Warm Bodies tells the story of a depressed zombie named R (Nicholas Hoult), who spends his days wandering the corridors of a corpse-infested airport with nothing to do but grunt, shrug, collect vintage knick-knacks, and ponder his non-existence. Oh and eat human brains. But R’s afterlife is about to change when he eats the brains of Perry (Dave Franco), the now deceased boyfriend of Julie (Teresa Palmer). Once R digests Perry’s frontal lobe, he assumes his victim’s memories, and consequently starts to fall in love with Julie. So we’ve had the “zom”, now it’s time for the “rom-com”.

Sure, a lonely, nostalgic zombie with an über-cool record collection falling in love with a human female might seem like a ridiculous premise for a film; but so was Twins. Warm Bodies works because it’s not a zombie film at all. It’s a post-apocalyptic Romeo & Juliet; a futuristic Gone with the Wind; or at least The Notebook with guns and cannibalism. It satirises all the right clichés yet avoids becoming an Anna Farris film, and sets the love story against a soundtrack that says exactly what R cannot. 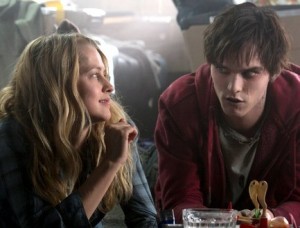 What makes Warm Bodies so effective is the question it forces us to ask of ourselves: what makes us different from the walking dead? Aren’t we all a little dead inside, wandering aimlessly through abandoned corridors, searching for something more – a direction; a purpose; a partner? But in this frantic world of constant distraction, we don’t take the time to acknowledge that we are searching at all. R has the time; he has nothing but time. R is plagued by the loneliness of his aimless existence, highlighting for us the one thing that we all truly want, and certainly need – love.

We are not told what caused the zombie apocalypse that frames Warm Bodies. Maybe it was a chemical outbreak, or maybe it was Kim Jong Un’s trigger finger? But maybe it wasn’t. Maybe it was simply evolution? In a world infested with zombies, who are we really fighting?