"James is such a natural for this material that it almost feels like he was the one who originated the Space Jam series, not Jordan."

"If Easter eggs are your thing, the film has been stuffed with Warner Brothers’ intellectual property."

The debate about the greatest basketball player of all time has lately come down to two people: Michael Jordan and LeBron James. There are contrarian choices you could put forward for the sake of argument, but most people have come to accept this basic binary for discussing basketball greatness. Since Jordan came first, James has been playing professionally in his shadow for more than 15 years now, trying to convince all the naysayers that he’s just as great. So that logically meant that if Michael Jordan made a Space Jam movie, James had to make one too. 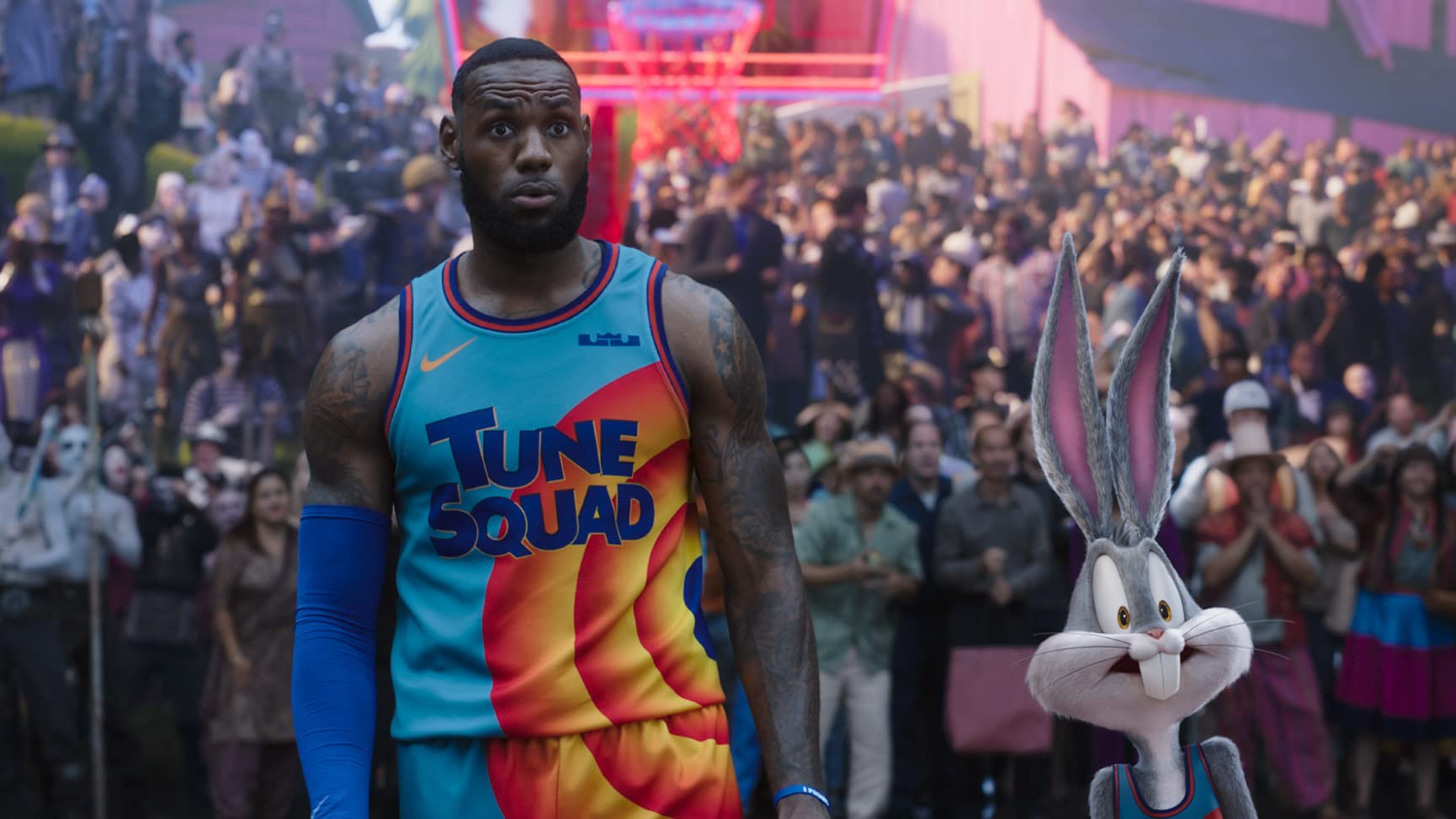 James may not be the better player – tipping my hand on where this long-time NBA fan comes down on the subject – but he’s made the better Space Jam movie. And that’s not only because he’s clearly more comfortable as a performer than Jordan, with a more natural instinct for comedy and sentiment. No, it’s because Space Jam 2.0 – called Space Jam: A New Legacy – is by far the more charming, the more technically accomplished, and the funnier movie. It provides the basketball, the taste of old-school Looney Tunes animation, and all the 21st century, internet age bells and whistles that sometimes detract from a product, but only enhance this one.

This didn’t come out of nowhere for James. In fact, he steals his every scene in Judd Apatow’s Trainwreck, arguably the best part of that flawed movie. Basketball can be taught, but personality and showmanship are innate. And the reality of the situation is, he has more of both of those than Jordan – off the court, anyway.

The original Space Jam saw Michael Jordan playing a squad of animated basketball super-players called “monstars,” with the hapless assistance of a familiar array of Looney Tunes favourites, such as Bugs Bunny, Daffy Duck and Elmer Fudd, all to help save some kind of outer space amusement park. A New Legacy follows more or less the same structure, except this epic game is in the virtual space, within the bounds of a video game designed by LeBron James’ son, Dom (Cedric Joe). (Don’t worry, there’s still something about outer space so that the title makes sense.) Orchestrating the big stakes of this big game – which have to do with whether James and his family will be trapped inside a server forever – is a villainous algorithm played by Don Cheadle, known as Al G. Rhythm.

The finer points of the plot (which holds together well enough) are less important than how it all comes off, and that’s with a supreme amount of entertainment value. As discussed previously, James is comfortable in all the elements presented here, whether that’s his palatial coastal mansion in Los Angeles (where he plays for the Lakers) with its own backyard court and voice-activated ball delivery machine, or the southwest landscape of old Roadrunner cartoons with their tunnels painted on the sides of rock faces, or the virtual court of Dom’s game. When he smacks into an invisible barrier and steadily slides down, his lip and cheek dragging on the glass as he descends, it’s comedy gold. James is such a natural for this material that it almost feels like he was the one who originated the Space Jam series, not Jordan. 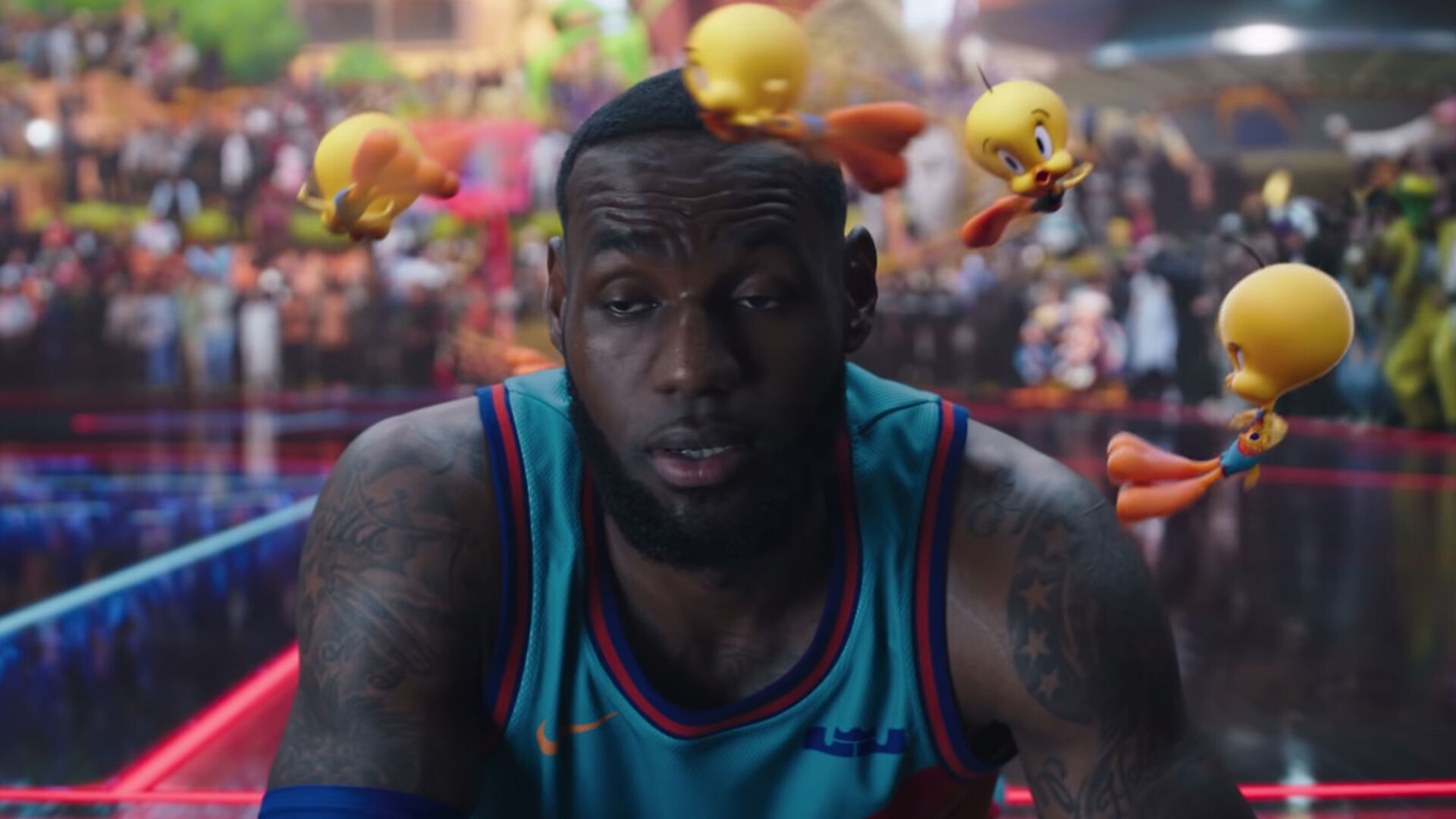 He’s also comfortable poking fun at himself. There’s a bit of self-shade thrown, both in references to how many teams and fan bases he’s left behind in his career, and to the debate about how great he is in the history of the sport. James is shrewd enough to recognise that a little modesty takes the edge off of some of the ego that goes with the territory for an athlete nicknamed “King James.” He’s also a great giver of shit, as there’s even a part where he jokes about the unibrow of Laker teammate Anthony Davis, one of the real professional basketball players – both male and female this time – who are transformed into the “goon squad” James and the Looney Tunes play.

In a clever method of pleasing old-school fans while trying to seduce new ones, the film splits its time between classic hand-drawn animation and the 3D animation to which the characters are upgraded partway through. The hand-drawn stuff retains the spirit of the old Warner Brothers’ cartoons, capturing both the essential playfulness of that physics-defying mode, and, in its writing and voice acting, the quicksilver wit of Bugs Bunny and (to a lesser extent) the other characters. If you’ve forgotten those characters or never knew them, Space Jam: A New Legacy will give you a warm introduction – while also allowing you to see them using cutting edge animation, which does nothing to diminish their essence. The good squad in particular are imaginably conceived through those effects. 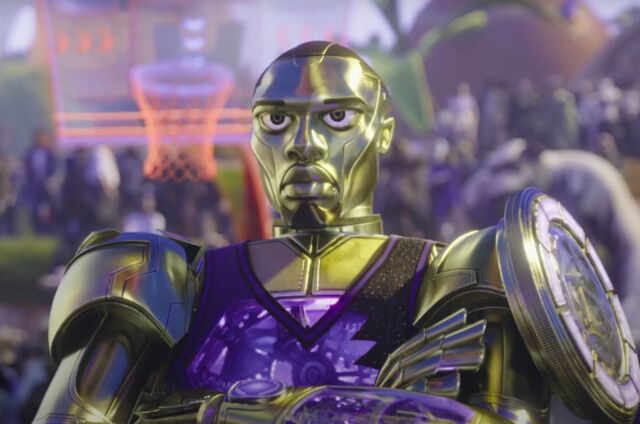 If Easter eggs are your thing, the film has been stuffed with Warner Brothers’ intellectual property, squeezing characters from Harry Potter, King Kong, Game of Thrones and even Stephen King’s It into the audience viewing the game. It’s kind of WB’s attempt to answer similar things done in Ralph Breaks the Internet and Ready Player One, and generally speaking it produces more giggles than groans.

Malcolm D. Lee is an unusual choice to have presided over all this and given it such credible execution. The director is known for realistic comedies like Girls Trip and Night School, but he’s clearly paid attention both to Joe Pytka’s original, and numerous other hybrid animated-live action blockbusters that have hit the multiplexes over the years. He may not bear responsibility for the bells and whistles, but he’s gotten the most out of James’ charisma, and that may be more important than the technical stuff. (Plus, Cheadle has tonnes of fun as Al G. Rhythm.) 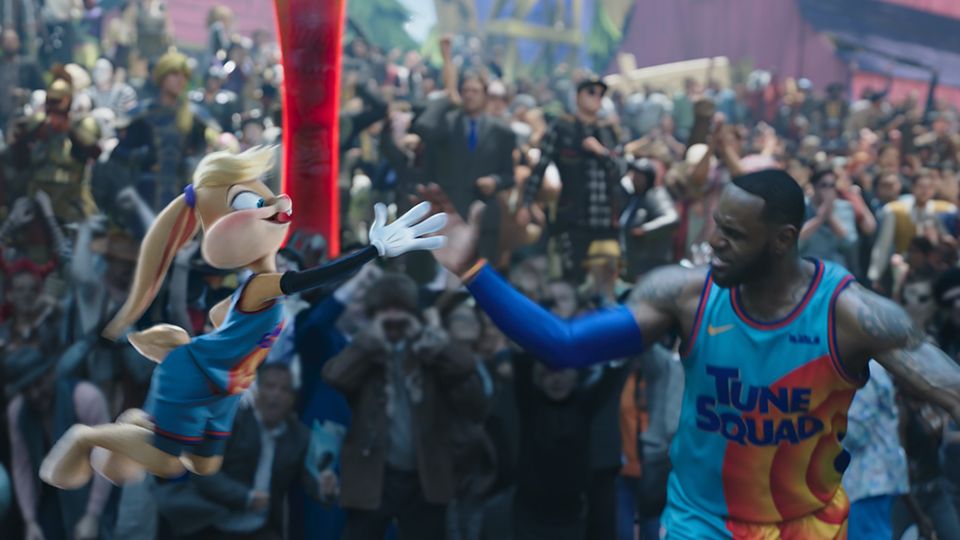 Perhaps this film’s best upgrade over the original is its emotional stakes. If you can’t remember the heart behind Jordan’s original quest, well, that’s because there wasn’t any. Here, the focus is on Dom James trying to pursue his actual dream – computer programming, not basketball – as his dad tries to see beyond the errors of his own tunnel vision. It’s no spoiler to say that they get there by the end. Like the best popcorn entertainments, A New Legacy is unspoilable, because all it’s doing is giving you what you want, how you want it. And that’s plenty.

Space Jam: A New Legacy is currently playing in cinemas.