The return of Ironside. 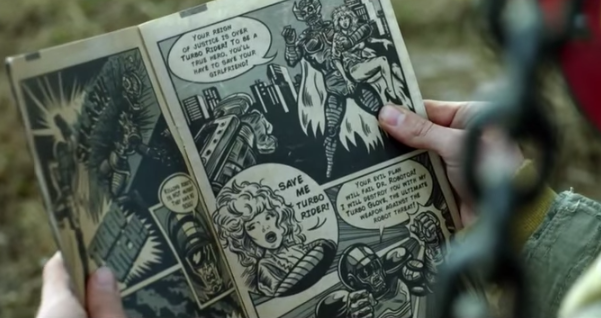 Michael Ironside. We didn’t know how much we missed thee until today. Welcome home, sensei. Moving along, this is a trailer for Turbo Kid, a throwback to the glorious years of 80s action films. The inspirations won’t be hard to miss for anyone with even a fleeting enthusiasm for the bygone era and, by all accounts, the film is actually quite decent in its own right. Early responses from the screenings at Sundance early this year were positive and this brand new trailer has, at the very least, piqued our interest.

“In a post-apocalyptic future, THE KID, a young solitary scavenger obsessed with comic books must face his fears and become a reluctant hero when he meets a mysterious girl named APPLE. Despite their efforts to keep to themselves, ZEUS, the sadistic and self-proclaimed leader of the Wasteland, plagues THE KID and APPLE. Armed with little more than blind faith and an ancient turbocharged weapon, THE KID learns of justice and friendship and embarks on an incredible journey to rid the Wasteland of evil and save the girl of his dreams.”