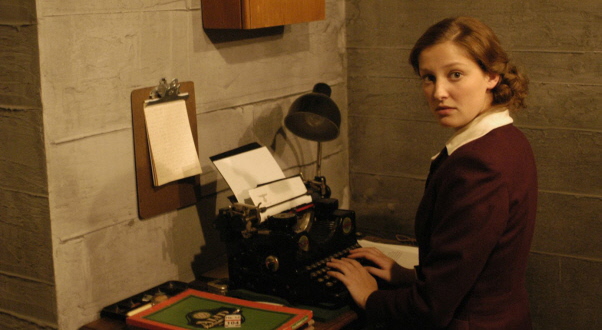 ReelGood wants to provide a list of the greatest modern German films, with the added hope that people should see them if they have not already. German cinema, the majority of the time tends to be more ambitious and inventive than Hollywood and its soul destroying system. Enjoy!

A young woman has twenty minutes to find and bring 100,000 Deutschmarks to her boyfriend who owes it to a very bad man. If she does not get him this money he will rob a supermarket to get the money and save his life. Three different alternative versions are shown.

The themes are simple but powerful. What affect do our actions and those of others have on our lives? Are the events of our lives random or fate? How much of a choice do we have?

In a tight ninety minutes, the viewer is exposed to an original, fast-paced, tour-de-force. The pulsating music and action, mixed with animation, cinema vérité style, ground-breaking direction, and a barrage of quirky characters and situations makes for absorbing viewing.

A makeshift prison is assembled at a research lab. For two weeks twenty male participants are hired to play prisoners and guards, with everybody being free to quit at any time (but this would forfeit their payment). Throughout the experiment the mood between groups escalates to dangerous and frightening levels, with both groups taking their roles to radical places.

The Experiment is a surprisingly intense and challenging film. The concept is unique and confronting. Watching the ever-changing interaction between the prisoners and the guards, and its implications is fascinating.

The film brilliantly portrays the dark truth of human nature, and the fragility of innocence. Not many films better reveal the weak veil all ‘good’ and civilised people hide behind.

The final days of Sophie Schooll, one of the most famous members of the German World War II student resistance group, ‘The White Rose’, are accurately brought to life. The journey covers her arrest, interrogation, trial and sentencing in 1943 Munich.

Sophie Scholl’s final days provide a gripping story of a woman unwavering in her convictions and loyal to allies, against horrific oppressive forces.

The great performances lay the platform for something that will move one as a viewer, and force the viewer to ask tough questions of themselves. Sadly most viewers would be left knowing they could never make the same types of sacrifices, and show a similar level of courage as Sophie did. The brilliant interrogation scene alone makes the film worth watching.

The film provides a glimpse into Germany’s terrorist group, The Red Army Faction (RAF). The RAF was a group responsible for organising bombings, robberies, kidnappings and assassinations throughout the late 1960’s and 1970’s.

One of the interesting themes in the film is one of how to evoke political change. Should one pursue revolutionary action? Or should one seek peaceful means? The tension created by this binary opposition is thrust at the viewers. We literally see the results and sacrifices of real action over theoretical action in the character of Meinhof.

Due to the fact so much complex history is squeezed into the film, it probably succeeds more as an intelligent action film than an informative historical drama; but it is a winner none the less.

The film centres on a Jewish counterfeiter Salomon ‘Sally’ Sorowitsch, who is coerced into assisting the Nazi ‘Operation Bernhard’, a secret plan during WW2 to destabilise Great Britain by flooding its economy with forged currency. Sorowitsch is a man with no morals who is placed in a position of grave moral significance.

The film was a deserving winner of the 2007 Best Foreign Language Film at the 80th Academy Awards.

The Counterfeiters is another glimpse at the pure horror of concentration camps and the Nazi regime. However the film extends beyond other Holocaust films in that it shows the significant moral complexity, and burdens that many Jewish inmates were faced to act upon.

The major dilemma the film wrestles with is whether one should help the Nazis, and live (or live in better circumstances), or lose your life but shorten the war and save lives.

The Wave details how a school project on autocracy ends in disastrous and revealing results. Initially without enthusiasm to teach the topic, a teacher conducts an unconventional experiment to reveal to his pupils (equally unenthusiastic) what life would be like under fascism. The experiment begins with simple discipline and propaganda on the class and grows quickly to become a large fascist group named ‘The Wave’ that transcends the school.

The film is based on the book The Wave which was inspired by the social experiment The Third Wave. It explores fascism’s powerful seduction over people of all ages and the individual psychologies that bring about uncontrollable collective movements, and how individuals are personally affected by them. The movie ultimately aims to show how fascism is destructive, and any society is vulnerable to it.

In 1984 East Berlin, a loyal and efficient agent of the secret police conducts surveillance on a subversive writer and his partner and finds himself becoming fascinated by their lives.

The Lives of Others is a gripping drama about the facility of human beings to do the right thing, no matter how far down the wrong path they have gone. This film starts slow, but slowly drags you in as an audience, until it has an oppressive grip on your attention, and becomes engrossing.

Two activists are breaking into luxurious mansions at night, re-arranging furniture, and leaving anti-capitalist messages instead of stealing or vandalising. Then once one of the characters girlfriend’s wants to join in, the three activists stumble together into a kidnapping plot after they encounter a businessman in his home.

The film is an enthralling thriller about romantic confusion (political and physical romantic confusion). It is especially engrossing for anyone with a radical or rebellious streak in their body; or for those who can relate to the characters feelings of confusion and frustration with the society they live in.

In 1990, a young man protects his fragile mother from a fatal shock after her long coma which has taken place over the months when the Berlin Wall falls. She wakes up oblivious to a unified Germany, but cannot be allowed to know everything she has held dear has disappeared. As a result, her son has to pretend nothing has happened.

The interesting characterisation, great script, great direction and some thought-provoking ideas make Good Bye Lenin! a winner in all areas. The film is a brilliant examination of how ones perception of certain truths can impact on ones lives.

The story of Hitler’s final days is told in excruciatingly intense detail. Downfall is painstakingly put together from all the historical data available from the time period. These unbelievable truths combined with classic film making methods reveal a mind blowing, intimate, and deeply disturbing portrait of Hitler and his followers at their demise.

It is all brought together by the brilliant performance of Bruno Ganz, who is phenomenal as Hitler. In humanising Hitler it does not make him appear any more sympathetic; this Hitler may be human, but he is absolutely degraded as a human.