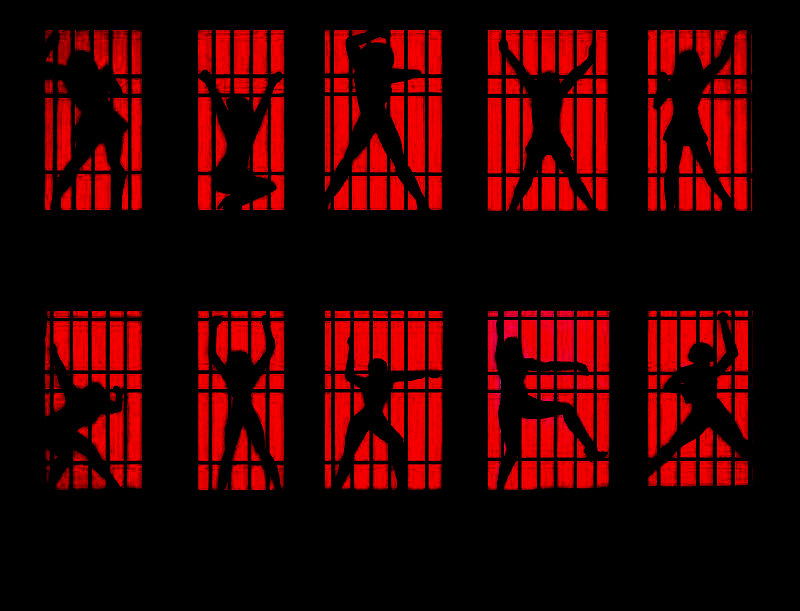 It’s a trend for female killers to be depicted as fashionable and glamorous in films. Not Carrie White. She is truly terrifying – and also an excellent cautionary tale for high school bullies.  You know from the start that something’s not right with this girl, and naturally you’ve got to take pity on her when you see how horribly her classmates treat her. They deserve some type of punishment, sure, but it’s hard to support Carrie’s homicidal method of revenge. Don’t take Carrie to the prom.

It’s hard to pick out one standout jailbird in the Crookem County Jail – they’re such a killer team. The way they twist the truth with such self-confidence is enough to make you love these girls. It’s strangely endearing watching these women defiantly sing/rant about the men they’ve murdered – they’re so captivating, you find yourself agreeing with them as they confidently proclaim that their victims “had it coming”.

Courtney Shane is the face of teenage evil. She is the queen bee at Reagan High, and she’s not going to let a little thing like the murder of her best friend get in the way of that. Her clique, the “Flawless Four” have a hilarious dynamic – and their kitschy 90s fashion is to die for – but Courtney is the one who really shines. While Julie Freeman (Rebecca Gayheart) and Marcie “Foxy” Fox (Julie Benz) panic at the sight of their dead best friend, Courtney maintains her composure and shakes it off casually. She can always muster the ability to act like everything is “peachy fucking keen” – and that’s why she’s head of the pack.

Unlike some other bloodthirsty babes on this list, Veronica Sawyer doesn’t enjoy sending people to the grave. Despite her attempts at giving up the murder business for good, she just can’t resist the charms of J.D. (Christian Slater), the one who introduced her to the world of senseless violence in the first place. We’re all rooting for Veronica, despite her criminal record, and it’s a beautiful moment when she tells J.D. what we’re all thinking: “You’re not a rebel, you’re fucking psychotic!”

What a messed up Disney character. The very sight of a fur coat makes me squirm, so a woman whose whole life is predicated on animal cruelty should terrify me. But… she’s just so… so fashionable! Let’s pretend for a second that she doesn’t heartlessly slaughter puppies for fun, and just focus on her style – I mean, that hair. Life-changing. Her actions are inexcusable, but she works it. If she switched to faux fur, we could be best friends.

I’m not sure if these women can really be considered killers, although they most certainly have the motives for murder. Stuck in one snowed-in house together, these eight women all begin to suspect one another after the death of their mutual acquaintance/family member Marcel (Dominique Lamure). They reveal hidden secrets and put their relationships to the test, and yet, it never really feels like it’s about the deceased man wasting away upstairs – it’s about the beguiling, mysterious, and ever-so-glamorous French ladies. Also, they sing.

Medea (Maria Callas) truly tops the charts for cruelty. After her husband Jason (Giuseppe Gentile) leaves her for a young Greek woman, she kills said woman – and, by a happy accident, said woman’s father. To punish her husband further, she then kills the two sons she had with him. Most people are usually okay with Medea up until the part about her children –it seems a tad unnecessary, even for ancient Greece. But morals aside, she’s a noteworthy murderess, and not one to be underestimated.

Only John Waters could make a serial killer like Beverly (Kathleen Turner) so endearing. Suburban settings and “apple-pie” classic American families are always fun when you add scandal to them – and what’s more scandalous than a “Serial Mom”? It’s nice to see a mom finally having some twisted fun – who says they can’t be just as evil as anyone else? She’s getting her kicks, and besides, she’s only killing the people who do really bad stuff… like wearing white shoes after Labor Day.

Christian Slater again? Can he have a relationship with a girl without her ending up murdering someone? Apparently not – the cute call-girl Alabama (Patricia Arquette) is so head-over-heels enamoured with Clarence (Slater) that she would literally kill for him. And she does, incidentally. Out of context, this sounds fairly deranged, but the pair are so very much in love that it all seems quite… well, romantic. Truly Romantic.

These two really don’t fit in. Any time they kill people it’s so moralistic I can’t even bring myself to call it “murder” – when Louise (Susan Sarandon) shoots the guy who attempted to rape Thelma (Geena Davis), she is defending her friend. What could be nobler than that? Technically, yes, they have killed one or two people, but they’re good women who’ve just gotten into some bad business. The other murderesses on this list could take a few notes from Thelma Dickinson and Louise Sawyer!