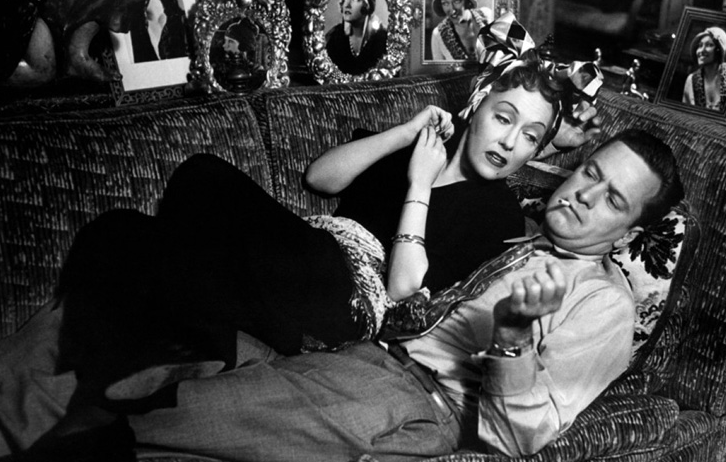 The Coen Brothers’ first exploration of Hollywood tells the story of Barton Fink, who, after writing a hit play, is sent to California to script a new wrestling movie. Fink soon finds himself with a case of writer’s block, as his pretentious claim of being a ‘champion of the people’ struggles to complement the task of writing a piece of light or low-brow entertainment. Throughout this ordeal, he is holed up in a small, worn out hotel, where his only real contact is John Goodman’s Charlie Meadows – a salesman. The film starts as a reasonably light satire of 1940s Hollywood before a very specific shift sees it become a nightmarish and surreal take on a man’s drift into insanity – possibly with Hollywood to blame.

Another movie about movies where a character is driven insane. In Sunset Blvd., it is Norma Desmond who is pushed to the edge of stability, having been left behind by Hollywood in the shift from silent film to sound. As a result of this loss of fame, the delusional Norma hides herself in her mansion, where she dreams of a return to the top. When small-time screenwriter Joe Gillis is taken in by Norma – who hopes he will be able to help with her comeback – her spiral into insanity truly culminates. As is promised at the beginning of the film, a murder is eventually committed as Norma’s delusions turn into a complete mental breakdown.

David Lynch’s take on Hollywood is expectedly disturbing. Taking great inspiration from Sunset Blvd., with Lynch himself stating that Betty and Norma are “both experiencing some of the negative sides of acting”, Mulholland Dr. is yet another movie about movies where a character seems to choose a delusion over the harsh reality of their life and acting careers. While there are many things going on in this movie – some easier to decipher than others – its dark and morbid look at the lives of Hollywood actors stands out.

The Player is Robert Altman’s very cynical satire on Hollywood. It takes aim at everyone including the executives, the sellout directors and the writers. The film follows Griffin Mill, an essentially soulless studio executive, who is receiving death threats from a writer whose script he rejected. After murdering a writer who may or may not be the one sending the threats, Griffin has to keep himself from being caught – a task which actually proves to be not so difficult. The standout sections of The Player come at the opening and closing, where Hollywood’s need for universality and happy endings is brilliantly critiqued.

While all of the movies on this list could be considered ‘meta’, Federico Fellini’s autobiographical story of a director struggling to get his next film started stands out. As Guido (the in-movie director) continues to struggle with both his professional and personal life, he chooses to escape through dreams and memories. This leads to several dreamy, funny and visually enticing set pieces, which work as a great way to demonstrate Guido’s and in turn, Fellini’s, inner struggles with film.

If 8 ½ is meta, then Adaptation might just be the most meta. Written by Charlie Kaufman, and starring Nicholas Cage as Charlie Kaufman, Adaptation tells the story of a screenwriter who is given an offer to adapt Susan Orlean’s book The Orchid Thief, after the success of his first film, Being John Malkovich. This premise is more or less exactly what happened to the real Charlie Kaufman, and this film is what resulted. Confusing line between reality and fiction aside, Adaptation is perhaps the very best movie about screenwriting there is, as Kaufman’s (both the character and writer) struggles with representing reality, following and defying the rules, as well as dealing with a significant sense of self-loathing, all build to a fantastic and quite unpredictable conclusion.

The description to The Dirties reads, “Two best friends are filming a comedy about getting revenge on the bullies at their high school. One of them isn’t joking.” This perfectly encapsulates the funny yet dark tone that the film is able to pull off. What starts off as a fairly uniquely funny story of sticking it to the bullies gradually becomes more troubling as Matt, who essentially talks in movie references, begins to blur the fiction of their project with reality. The shift from darkly comical to what really becomes darkly disturbing never feels unwarranted, as it takes ideas that are common on this list – the main one being the lines between fiction and reality blurring – in a very interesting direction.

Lost in La Mancha is a movie about an actual movie, or what was almost an actual movie. This documentary follows the production of Terry Gilliam’s The Man Who Killed Don Quixote, which seemed destined to fail. The nature of this documentary gives a great insight into the complexity of getting a film together, as things like money, weather, and actors’ health and availability all work against Gilliam. Seeing the hope and excitement in Gilliam during the good times of production is just as depressing as seeing his anger and frustration during the bad, because we ultimately know that it’s only going to end badly for him.