The Bling Ring marks Sofia Coppola’s fifth feature film and one year shy of fifteen years of feature filmmaking. Although many critics still draw unnecessary attention to her privileged upbringing and lineage, Coppola has well and truly made her mark as an accomplished writer, director and producer and has managed to establish a distinct auteur style. To those who have been introduced, it’s not hard to pick a Sofia Coppola film when they see one.

Drenched in dreamy pastels and golden colour filters, Coppola’s debut feature film The Virgin Suicides (1999) set the tone visually and thematically for much of her oeuvre. Adapted from the novel by Jeffrey Eugenides, the screenplay for The Virgin Suicides had been a project of Coppola’s since 1993. When the film was released to wider audiences over 1999 and 2000, it was met with great critical acclaim and quickly became a favourite of indie and arthouse lovers. It depicts the story of the five beautiful Lisbon sisters growing up in suburban upper-middle class America in the 1970’s, with slightly stricter than average parents and with a fan club of teenage boys who follow their every move.

Right from the beginning, with The Virgin Suicides, Sofia Coppola established herself as a filmmaker who is much more interested in creating a mood rather than making films with dense narratives. She often frames her characters in a signature shot from behind and just above, enabling us as her audience to gain an intimate perspective into the character and attaching us to the character in a way that other shot angles couldn’t achieve. Carrie Rickey from the Director’s Guild of America described this mechanism perfectly when she said “it’s as though the camera is a balloon invisibly tethered to the nape of the protagonist’s neck, bobbing and floating in her wake as she threads through space.” It is in this way that Coppola brings us inside her films, implicating us in the movements of the story and showing us a time and a place from her characters’ eyes, whether we want to be there or not.

Looking at Coppola’s work as a collection, there are consistent themes which reappear in many or all of her films. Significantly, in her last three films, Coppola has explored themes of excess and luxury, extreme wealth and materialism. Marie Antoinette (2006) was an MTV music video–esque portrayal of the 18th century teenaged queen of France who had limitless amounts of extravagant dresses, shoes, cupcakes, poodles, perfume, make-up, and servants to cater to her every whim. Her youthful naivety and complete unawareness of the living conditions of her country’s people eventually led to her downfall. The film is almost a pre-cursor to Coppola’s latest piece, The Bling Ring, in which a group of wealthy teenagers living in Los Angeles burgle a number of celebrities houses, acting on a burning desire to look and live like the stars they idolise in magazines and on the internet. Their greediness and naivety leads to their arrest and punishment but seems to only allow them another pathway towards their own kind of fame and celebrity status. Finally, Somewhere (2010) tells the story of an actor who is caught up in the trappings of the Hollywood lifestyle and has somewhat lost his way, until he has to take some time off due to an injury and spends a lot of leisurely time with his daughter who reminds him of the important things in life. 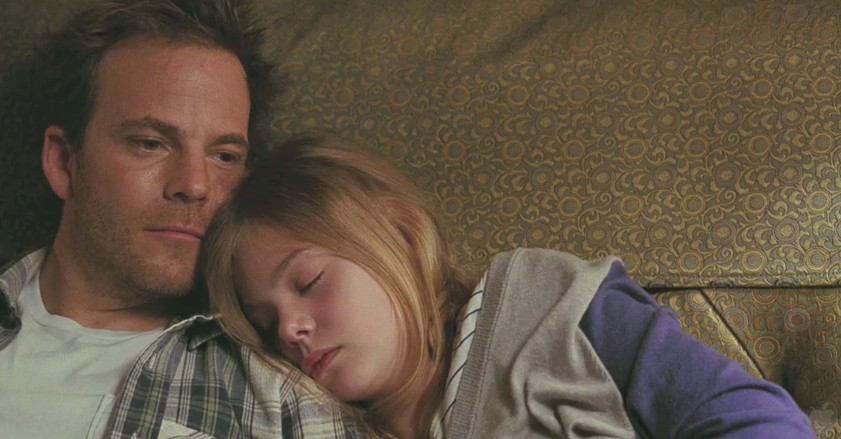 Somewhere is an obvious example of another recurring theme in Coppola’s films, that of the relationship between a father and his daughter. In fact, many critics have made the observation that the film is somewhat autobiographical for Coppola, given that it is about a man caught up in his work in the movie biz in Hollywood who reconnects with his daughter after spending some quality time with her. Perhaps this could be a hint at an experience Sofia might have had with Francis Ford? When questioned about this by Peter Bradshaw, writing for The Guardian, Coppola responded cheekily with, “Is this psychoanalysis? The father relationship is an important relationship for girls and it figures in my work.” Although it isn’t a direct one, the relationship between the two protagonists, Charlotte and Bob, in what is arguably Coppola’s best work and the film which earned her an Oscar for best original screenplay, Lost in Translation (2003) also at times resembles a father daughter relationship. One especially touching scene in the film shows Charlotte and Bob laying on a bed in a hotel room in Tokyo, staring up at the ceiling. Charlotte confesses feeling lost in her life, and Bob, with his wisdom beyond her years, shares advice with her with the warmth and sincerity of a father to his daughter.

The most common thread running through all of Coppola’s films, however, is that all of her protagonists are characters who are adrift or a little bit lost, with lives in a state of transition. Whether it be groups of teenage girls who feel stifled by their strict parents, or who are caught up in the glittery allure of celebrity lifestyles, or lonely souls having trouble in damaging relationships and who have lost touch with their sense of self, or who are literally lost and alone in a foreign country, no matter the storyline, Coppola’s characters are always a little lost and unsure. They are outsiders looking inside somewhere and desiring what they don’t have or they are trapped inside, looking out and dreaming of freedom or imagining an alternative life. Coppola feels for these lost souls and wants us to feel what it’s like to be them. She wants to encourage our ability to empathise with our fellow human beings, so she pulls us nice and close in to her characters’ heads and forces us to see the world from a perspective that isn’t our own.

Coppola’s character driven, atmospheric films anchored by a particular mood and visually dreamy with soft pastels and colour filters paired with hypnotic soundtracks by bands like Air and Phoenix, are definitely not your typical Hollywood film. However, they’re all hers. Her filmmaking style is distinct and personal and one she has established as being recognisably her own. Not her father’s or her brother’s or anyone else’s. While her characters may be adrift and unsure of themselves, Sofia Coppola has found her voice and proven herself as one of this generation’s most unique and popular filmmakers.