Death is a topic often swept under the rug. It is a notion riven with fear, uncertainty and repudiation. Yôjirô Takita’s 2008 drama Departures exhumes and handles the issue pragmatically, and in doing so finds a beauty in its finiteness.

The film follows Daigo Kobayashi (Masahiro Motoki), a professional cellist in his late 20’s living in Tokyo. After losing his job and becoming disillusioned with his aspirations, Daigo and his wife Mika (Ryoko Hirosue) return to his hometown to live in his recently deceased mother’s house, hoping to start afresh. Daigo immediately sets about finding a new vocation, and in the process, himself.

Desperate for work, he stumbles upon a vague classified in the local paper for an assistant to aid in ‘Departures’. With an optimistic attitude over what the term ‘Departures’ in fact entails, Daigo turns up for an interview and is hired immediately only to learn that he will be aiding Mr.Sasaki, (Tsutomu Yamazaki) as an Encoffiner – a person whose profession is to prepare the body of a deceased person in a ceremonial manner for peaceful departure into death.

Witnessing scenes in which Mr.Sasaki prepares the deceased for burial, whilst initially confronting, are ultimately a beautiful experience. As corpses are elegantly transformed from lifeless entities to glowing snapshots of the deceased in their prime (at the masterful hand of Mr.Sasaki), we simultaneously witness the families of the deceased (who watch on) slowly breakdown from an initial disposition of detachment and feigned strength to utter anguish at the site of the lost ones being lovingly rendered back to life. Takita portrays this encoffinment process as highly cathartic. The families are finally able to put aside their social masks and bare their most primal emotions. Both the deceased and their families are purified, as all old grievances and mistakes are washed away in these emotionally intense moments, and a sense of closure, acceptance and gratitude is reached between all. 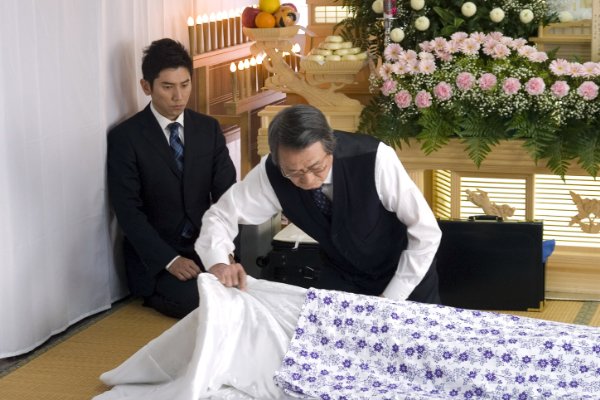 Morally, making a living off handling the dead is considered highly disreputable in Japan and as such our protagonist hides behind a charade of normality from the town and from his wife stating he is working in a run of the mill finance company. This overwhelming sense of shame felt by Daigo is touching. With no other options, and with societal pressures on him to find a well-paying job, we see all notion of pride leave Daigo as trudges off to work each day questioning how he ended up here. However in as much as Daigo is initially is shamed by his work, so too is his proficient hand in preparing the dead finessed, as Takita draws parallels between it and his skill in cello utilizing the symbolism of manual labour and skilled handcraft as a motif for Daigo’s positive regression to the simplicities of life.

The film concurrently takes a subtle peek at this notion of propriety and ‘face’, which dictate Japanese society, and asks what is really important. It seems this notion of societal decorum has become somewhat of a trademark of contemporary Japanese cinema.

Once consumed with his dream of being a famous musician, Daigo questions whether it was really his dream at all or his mother’s forced upon him. Why must he have to conform to established norms of what is acceptable and unacceptable in society? And who indeed decides this? The total breach of any form of social propriety, by working with the dead, breaks the shackles of conformity and social ideals once constricting Daigo. And it is only here that Daigo for, the first time, begins to discover who he is, what he wants and what is important to him in life. In working so intimately with death, he develops a beautiful sense of gratitude for the simple pleasures of life, and regresses away from his once held contemporary ideals. Now an outsider to the high pressure norms and pride driven rhythms of Japanese society Daigo finally arrives at his own sense of solace.

Coming full circle, our protagonist is visited by old ghosts from his past. And the notion of departure, a notion that he has extensively witnessed first-hand, will test him personally, putting into question everything he has realized about himself and life.

Films centred on themes of death and loss usually turn people away. However, you would be doing yourself an injustice if you were to by-pass Takita’s presentation of death – as a beautifully affirming appreciation for everything that is living.