"...The Lodge owes a lot to Ari Aster, but does not do Ari Aster nearly as well as Aster does."

Ari Aster’s Midsommar opened in the middle of MIFF this year, and depending on whether MIFF viewers had a chance to watch any “normal” movies during the festival or not, they might have gotten a sense of déjà vu while watching Veronika Franz and Severin Fiala’s The Lodge. Not maybe déjà vu from Midsommar itself, but from Aster’s previous film, Hereditary – though there’s Hereditary déjà vu in Midsommar as well (a discussion for another time). This is probably a complicated way of saying that The Lodge owes a lot to Ari Aster, but does not do Ari Aster nearly as well as Aster does.

Franz and Fiala actually have their own chilling horror movie from a few years ago called Goodnight Mommy, so perhaps saying they were influenced by Aster, whose films came after that one, is uncharitable. It seems clear that some of Hereditary might have rubbed off on them, though, especially in the sense that both films contain a creepy house and a dollhouse-sized version of that house inside it. Both films also spring from a violent trauma that happens near the start and that helps determine the thrust of the narrative.

In the case of The Lodge it’s the suicide of the mother of the two children at the centre of the story. She’s on the frayed edges of stability as it is, and when she learns that her soon-to-be ex-husband (Richard Armitage) plans on marrying another woman, that’s enough to push her over it. The children, Mia (Lia McHugh) and Aiden (Jaeden Martell), have to wade through their grief as well as their feelings of mistrust of her father’s new girlfriend, Grace (Riley Keough).

It’s not just that they don’t want anyone to replace their mother. It’s that this particular woman gives them the creeps, because when she was a girl, she was the only member of a suicide cult who didn’t end up killing herself. She seems pretty stable now, but that still doesn’t mean the children want to spend time alone with her in a remote wintry cabin at Christmastime when their father has to work.

The setup of The Lodge might be interesting if it didn’t feel so on-the-nose. Survivors of cults are not exactly new cinematic material, and any father who leaves his kids with one, when they’re likely to be snowed in and the nearest town is miles away, is majorly guilty of “movie character decision making.” If this were just a slasher movie that would be an acceptable logical leap to make, but Franz and Fiala want us to believe in the legitimacy of the emotions these mourning people are experiencing. It isn’t really possible to have it both ways, to ask us to take these people seriously but then to consistently give them such dumb things to do.

It’s probably not a surprise to learn that weird things start happening as soon as Grace is alone with the children, though it’s not the result of anything Grace is doing. She is genuinely trying to be the stable adult their mother was not, but events – and possibly supernatural factors – are conspiring against her. Suffice it to say that pretty soon everyone is wondering what’s real and what is not, as some of what’s happening seems like it could have no rational explanation. The rational explanations that are eventually provided just further undercut what the film is trying to do. 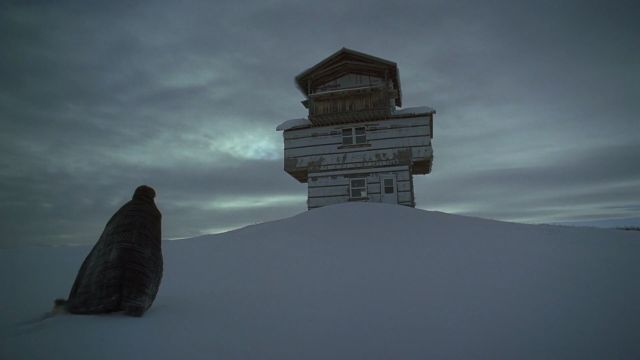 Franz and Fiala do have evident skills as mood setters and creators of stark, eerie landscapes. There’s a particular image of a lone building against a snowswept landscape – this might be the lodge of the title, or it might not be – that is particularly striking. They’re also working on core areas of fear through the sound design. As the film progresses, though, it becomes more clear that these hints of the macabre are not pointing toward a profound payoff.

As the nature of that payoff contains spoilers, let’s just say it involves an unlikely commitment to a certain course of action that makes the motives of certain characters highly suspect. It’s one of those films where people create their own problems, and then ask us to sympathise with them as though they hadn’t. In the end, it lodges in our brain for the wrong reasons rather than the right ones.