"This is a guy who made a movie about a murderous tyre."

"It’s not often you get to see a movie where a man talks to a jacket, and the jacket tells him he’s jealous of the existence of all other jackets."

Many directors dabble in the absurd, at some point in their careers, just to try it on for size. Quentin Dupieux says pish posh to their bourgeois dabbling. This is a guy who made a movie about a murderous tyre. Seriously. If you haven’t seen 2010’s Rubber, do yourself a favour, because the weird and wonderful adventures of a tyre traveling through the American southwest, blowing up people’s heads by telekinesis, will blow your mind. 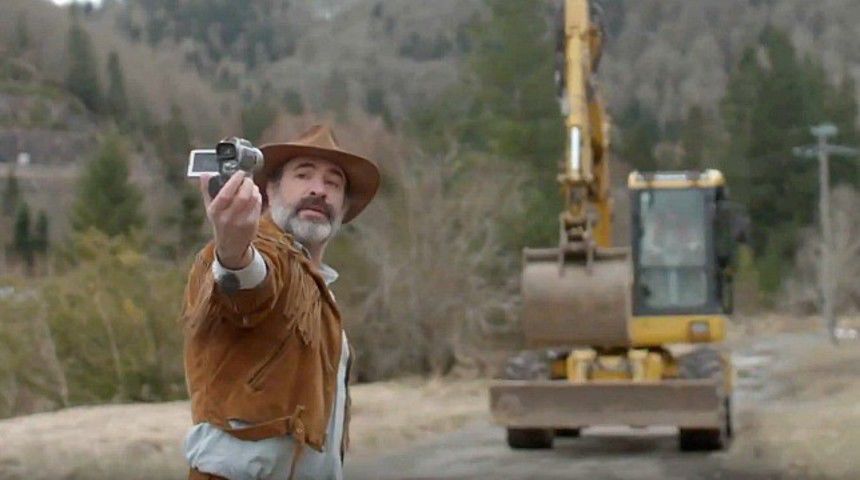 The French writer-director has made some false starts in the decade since Rubber, as you might expect, seeing as how perfectly realised absurdity is an elusive commodity. But he comes as close to that sublime condition as he has in four features with Deerskin, or Le Daim, as its title is in French. The film played MIFF in 2019 and is finally reaching Australian cinemas a year later – those that are open, anyway. While spoiling the central conceit of a film ten years old, whose premise is generally known, is one thing, we’ll want to dance around Deerskin to keep the glorious absurdity intact.

The fabric of the title comprises a jacket that has caught the eye of Georges (Jean Dujardin), an eccentric – though we don’t yet know how eccentric – husband who has just separated from his wife. The first clues to Georges’ skewed outlook come on his visit to the home of the man selling the jacket. He’s paying the man 7,500 Euros – or a little more than $12,000 in Australian dollars – for what appears to be a relic from an old cowboy movie, given just how out of fashion it is in whatever year this is. The jacket is even a size too small for him. But when something produces this kind of glint in your eye, you just have to have it. “Killer style,” Georges says, admiring himself in the mirror.

Unable to believe the deal he’s getting, the seller throws in a free video camera. Georges has no experience with cameras. But when he heads off into the countryside to stay at a rural hotel, offering his wedding ring as collateral when his card is declined, he starts filming his beautiful new acquisition. Then he starts talking to the jacket, playing both roles in a conversation between him and the jacket. When he tells the hotel barmaid (Adele Haenel) that he’s a filmmaker, and she just so happens to aspire to be an editor, they start fashioning Georges’ odd assortment of footage into a film. Georges’ deerskin jacket helps him come up with a theme for the film, telling him that it wants to be the only jacket in the world.

If you’re not on board with this description, you might as well get out right now. But I hope you are. Dupieux takes an actor we know as a debonair leading man and transforms him into this oddball weirdo who is obsessed with clothing made from the skin of deer. Before the world really met him in The Artist, Dujardin came up playing a parody of James Bond in the French OSS comedies, so he isn’t actually a stranger to comedy. But he’s a stranger to this sort of comedy, as would be almost anyone. And he’s an inspired choice. Dujardin is able to take this man’s evident insanity and give it as normal a presentation as he can. 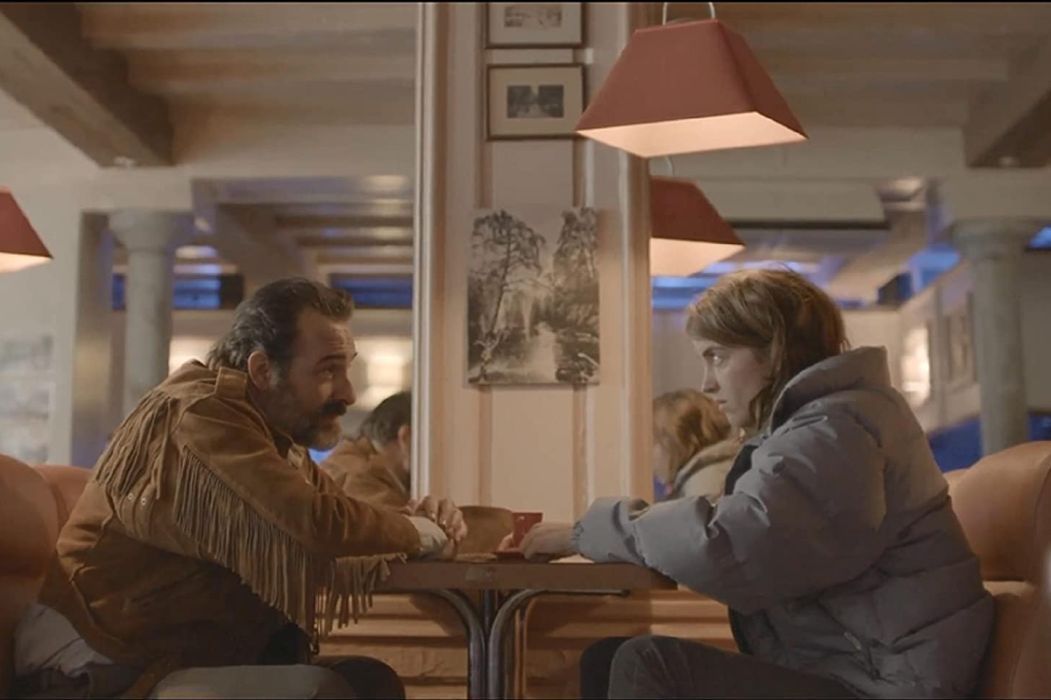 Which is why Denise, the barmaid, actually goes along with him, even though she figures out pretty quickly he isn’t who he says he is. As our surrogate, she seems like she should be more reluctant to participate in his bizarre vision, especially as it requires her to max out her daily ATM withdrawals to finance the film. But Haenel, so wonderful in Portrait of a Lady on Fire, sells this to us. When she sees some of the footage, she says “I’m into it” – and you get the sense she’d be into anything that would jump start her life.

The film within the film, ridiculous as it is, would seem to serve as a commentary on not only the process of filmmaking, but on the process of making the types of films Dupieux himself makes. One hesitates to ascribe any artistic goal so transparent to the man, considering that one of his Rubber characters gives a speech about things in movies that happen for “no reason.” (Of course, these aren’t significant plot points – at one point he asks why the people in The Texas Chainsaw Massacre never wash their hands. “No reason.”) Dupieux would like you to believe the things in his films happen for “no reason,” but it’s difficult not to recognise in Deerskin a muted celebration of the type of career he’s been able to have. 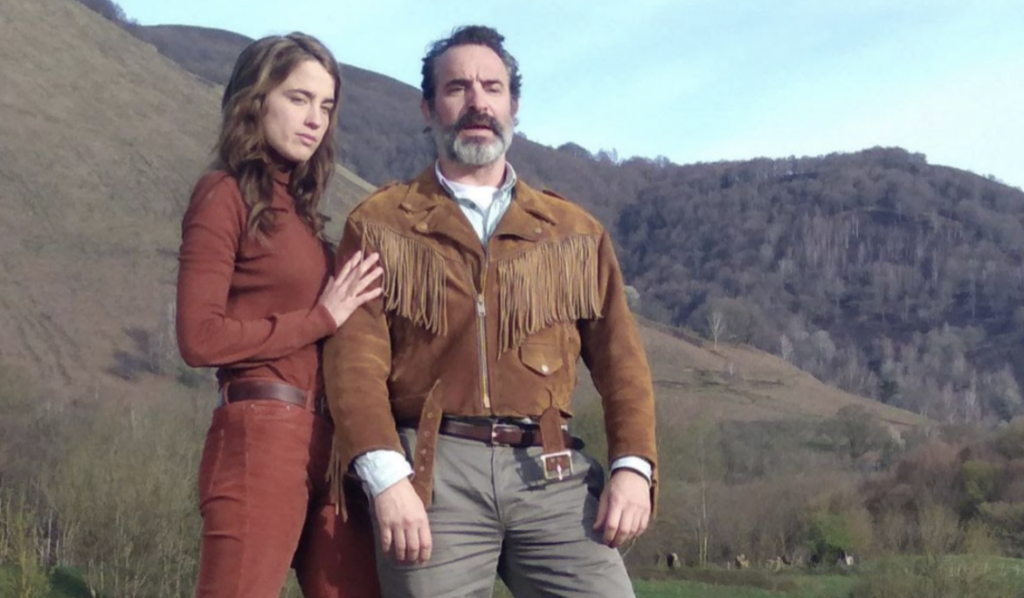 And why shouldn’t we celebrate it? It’s not often you get to see a movie where a man talks to a jacket, and the jacket tells him he’s jealous of the existence of all other jackets. We should thank our lucky stars that Dupieux still has a Denise out there, someone willing to give him money to make his movies this unhinged. Talent like Dujardin and Haenel realise how delightfully invigorating movies like Deerskin are, and have legitimised them with their involvement. To our benefit, that means they actually get made and we actually get to see them.

Dupieux may genuinely not care if we watch his movies or not, though probably every artist wants an audience. This “not caring” frees him up to pursue whatever flights of fancy flit through his head, and he’s got the skills to realise those visions. Deerskin definitely isn’t for everybody, but those it’s for, it’s really for.