Delivery Man is an English language adaptation of the French feature Starbuck, and is also directed by Ken Scott. I’d be lying if I said that I held high hopes for this movie (I guess a lot of Hollywood comedies have left me a bit pessimistic about the genre lately), but I was surprised by what I found. It isn’t uproariously hilarious as it tries to be, but the film has some unexpectedly heartfelt moments that manage to pull it through.

David Wozniak (Vince Vaughn) has no life. He owes a lot of money to some dodgy people who may or may not drown him if he fails to pay up, and he drives a delivery truck for his family’s meat business. David’s life is turned upside down when he finds out that due to the mistakes of a fertility clinic, he is the biological father 533 children. 142 of David’s children are suing to find out who ‘Starbuck’ is – the pseudonym David used to donate. Given a list of his kids profiles, David feels that he finally may have a chance to do something right, by acting as a sort of guardian angel for his children. 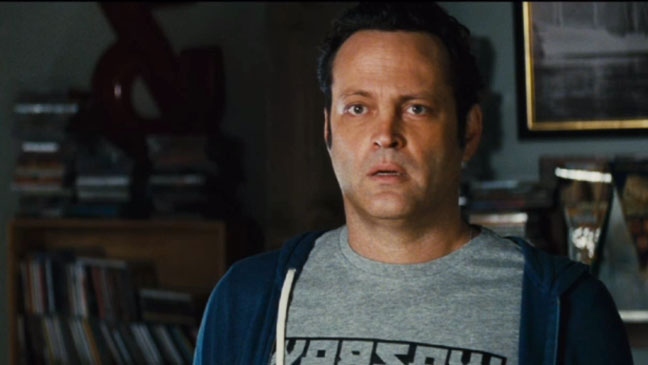 The main problem with Delivery Man is that a lot of the comedy and jokes fall a bit flat. It’s a premise based on a ridiculous situation. As David’s father (played very nicely by Andrzej Blumenfeld) says, ‘A normal person wouldn’t be in this situation.’ There are some situations where the absurdity, coupled with the deadpan delivery of the cast, that make for some excellent laugh out loud moments, but it’s very hit and miss. The interactions between David and his friend Brett (Chris Pratt), a somewhat failed lawyer, are the comedic strength of the film, and Pratt has some brilliant moments.

The best scenes in this film are the ones in which David interacts with his somewhat large family – his biological children, and his father. There are some really touching moments, and Vince Vaughn is able to bring across a great deal of emotion with a lot of sincerity – he’s overwhelmed, scared, and even proud all at once. His really was an excellent bit of casting! Cobie Smulders, as David’s girlfriend Emma, also puts in a strong performance, but feels underused.

Ultimately, Delivery Man doesn’t seem to know what it wants to be – a mainstream Hollywood comedy it is not, even though it feels like it’s being marketed as such. It has its funny moments, and even its uplifting ones, but too few laughs and an uneven tone let down what is an otherwise fairly pleasant movie.