Everyone’s favourite telekinetic teenager returns to the big screen in the latest adaptation of Stephen King’s classic horror story, ‘Carrie’. The original film adaptation, Brian de Palma’s 1976 version of the same name, served as a brilliant cautionary tale for the perils of bullying and landed Sissy Spacek an Oscar nomination for Best Actress.

Here’s something I never thought I’d say about the Carrie remake: it contains one of this year’s best performances. However, it’s not Chloë Grace Moretz’s reinterpretation of the titular Carrie White, but Julianne Moore’s performance as her extremist, guilt-ridden mother Margaret. In all honesty, she’s the only reason to watch this film, and the only terrifying element of this otherwise flaccid horror. Moretz turns the otherworldly, explosively repressed Carrie into a sheepish and bland caricature. The humiliation and betrayal which informs the film’s famous climax, and the operatic grandeur with which it unfolds, is sorely missed here. This is Carrie-Lite™.

Not only has our heroine become (pardon the pun) bloodless, but the film is littered with bizarre story discrepancies that are very distracting to the astute viewer. For example, as Carrie’s bitter schoolmates plot their revenge, they mention she’s been “asking for it since Grade 6”. However, in an earlier scene, Carrie’s headmaster mentions that Carrie has been homeschooled until that year (she’s in year 12). This isn’t the only obvious mistake. In the film’s prologue we witness Margaret giving birth to Carrie in ‘real-time’. Just as Margaret thinks she’s about to die, our infant protagonist appears in the bloody sheets. The film then cuts to a wide shot as Margaret picks up the baby and embraces it – but the umbilical cord has magically disappeared. Why even cut to a wide shot if you’re going to ignore basic biology? These kinds of continuity/story mistakes are actually embarrassing. 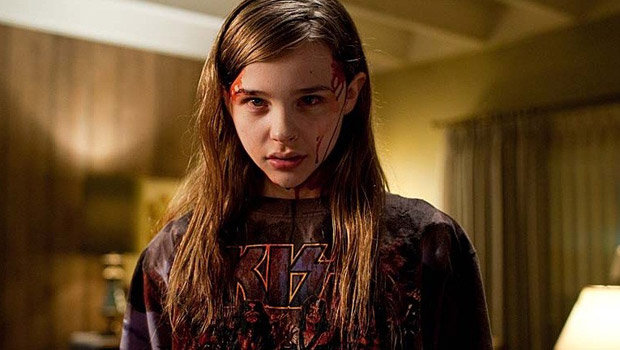 However, nothing is more embarrassing about this remake than its pitiful attempts to be contemporary. Unlike this year’s Evil Dead remake which gave its protagonists a genuinely believable reason to be alone in the woods and disconnected from technology, Carrie includes a YouTube video-sharing subplot which is both unconvincing and unnecessary. The film tries to highlight how segregated from technology and her peers Carrie is, but her social exclusion appears to be an afterthought in the film. Carrie and her mother are supposedly social outcasts, but only one scene in the film really illustrates their standing in the wider community. Margaret, working at a dry-cleaners, receives a visit from the mother of one of the girls who has bullied Carrie, and the hostile atmosphere between them is palpable. They couldn’t be more different: one is a privileged, upper-middle class soccer mum; the other a working-class religious zealot. The mother tries to apologise on behalf of her daughter, and Margaret listens blankly while secretly self-harming with a needle under the counter. She rejects the other woman’s peace offering with a stern warning: “These are godless times.” This is actually the most unsettling scene in the film – despite all the gore of the second half and all the special effects; this is the scene that had the audience audibly groaning in protest.

Moore’s desperation as Margaret White is compelling. She is terrified, not only of her own daughter’s brewing defiance, but of her past sins and the judgement of her community. When she tells Carrie those famous words, “They’re all gonna laugh at you!” she’s warning herself just as much as Carrie. Moretz on the other hand seems listless and frustrated more often than she seems frightened and hurt. The history of abuse between these two characters should be visible in Carrie’s behaviour around her mother, but she simply seems wary of and annoyed towards the woman who routinely locks her in a cupboard.

Even if the 1976 version of Carrie didn’t exist, this would still be considered a shallow and gormless adaptation. Not enough attention has been paid to characterisation and the details of the story, leaving the audience with no one to empathise with. Carrie’s telekinetic powers escalate so quickly over the film’s duration that the film’s climax lacks impact. In one scene, she jovially floats her schoolbooks around in her room (inducing Matilda flashbacks), and the sense that Carrie is nurturing an ominous and dangerous talent is completely missing. The thing that made Carrie a compelling character was the fact that she had powers she couldn’t really control. She’s a livewire, who, given the “right” set of circumstances, would unleash something beyond her control: a primal and destructive rage. The kind of rage that has been bubbling under the surface for years, encased in a timid and frightened shell.

Just like Carrie and her mother, Carrie is dogged by the legacy of its parent film, and ends up a bloody mess.