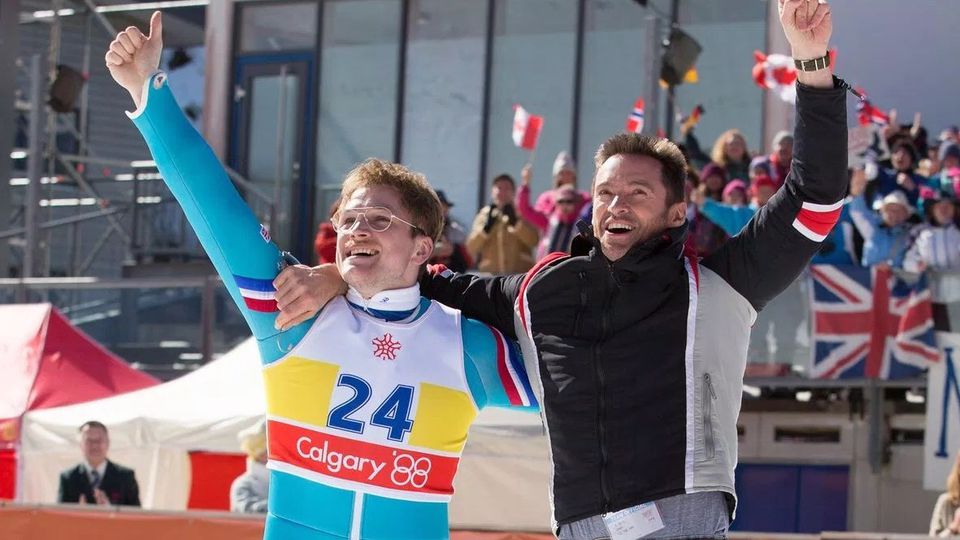 If it stands to reason that every outlandish human pursuit must eventually be committed to film, it’s kind of surprising that Olympic ski jumping has not had its moment in the celluloid sun before now. There’s something inherently cinematic about a skier launching himself aloft from a curved ramp, leaving his body as gravity’s plaything if he cannot stick the perfect landing after an unfathomably frightening amount of time in the air. In short, it’s a sport so dangerous that you have to kind of be clinically insane to do it. If there’s any movie to be made about this, might as well go the feel-good route and tell the story of British Olympian Eddie Edwards, who qualified for the 1988 Calgary Olympics despite only a year’s experience in the sport, and charmed the pants off the viewing public with his childlike antics and goofy shtick. He was nicknamed “the Eagle” in the process.

If only the movie about him weren’t as goofy as its main character. Eddie the Eagle is a cornball piece of popular entertainment, using a fanatical enslavement to formula to cheer on an underdog and leave the audience more satisfied for the experience. But can character types this lazy, montages this insipid, and a narrative this schematically cynical ever please any but the most forgiving viewers? Eddie the Eagle has eagerness to please in spades, but actual pleasing qualities in short supply. 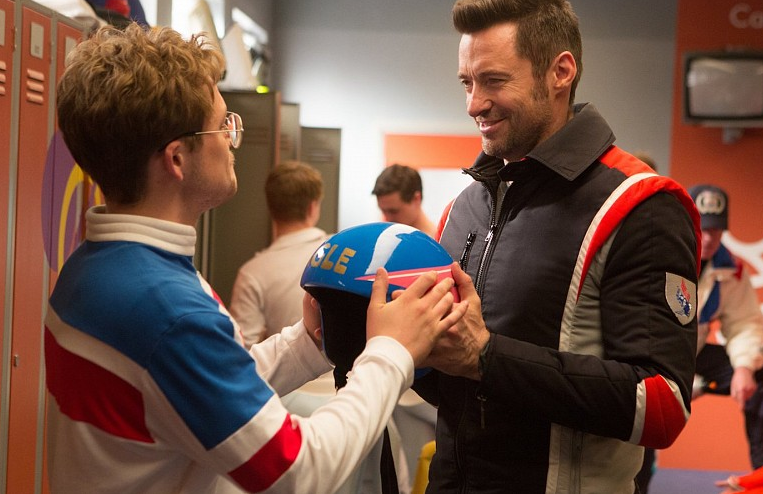 As much as the script is to blame for much of this, a huge chunk of the responsibility lies at the feet of British actor Taron Egerton in the title role. In going from Eggsy in Kingsman: The Secret Service to Eddie in Eddie the Eagle, Egerton has transformed from a bone-crunching tough guy to a guy whose bones just get crunched. And he’s made himself over as a complete spaz. He’s got droopy glasses that seem always to be falling off his face. He’s biting his lip whenever he isn’t contorting his mouth into the kind of determined frown usually seen only on stick figure drawings, and the lip-biting expression gives the sense that he’s always pushing out a stubborn bowel movement that’s coming out sideways. Even his tics have tics.

Egerton’s Eddie is an outsized creation that couldn’t exist in any recognisable version of reality, except that it appears he did – the pictures of the real Eddie Edwards that inevitably adorn the closing credits seem to suggest he was this much of a spaz and more. Egerton stylises him in the same manner of bigness that someone like Napoleon Dynamite might be stylised, but that kind of thing only works with equivalently oddball material. As the star of something terminally mainstream, Eddie just seems too precious by half. He’s like a newborn chick peering out of his freshly broken shell, recklessly optimistic about what the world has in store, with no real notion of the ways it might crush him. What’s worse is that the accompanying synth score has that same saccharine, post-embryonic pluck. 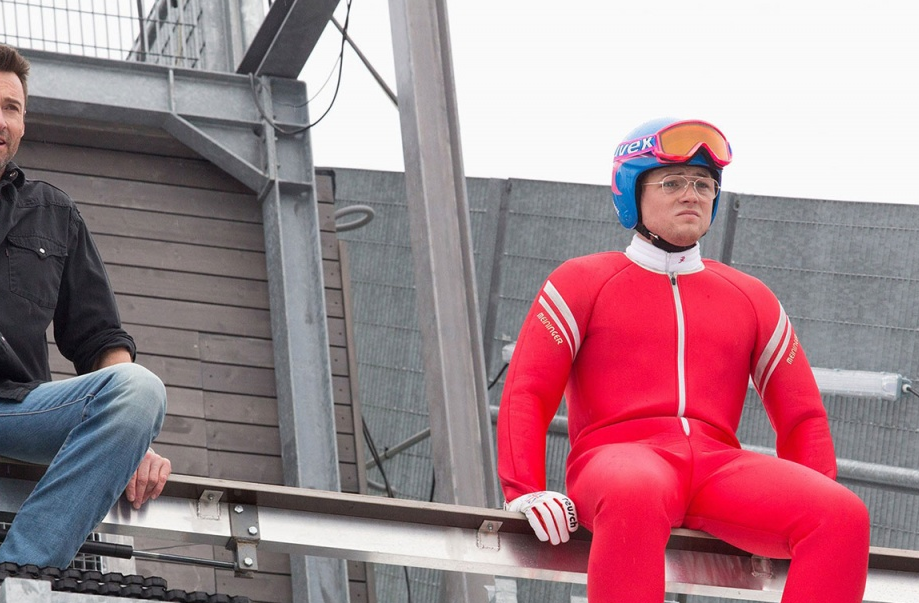 Lazy character types? How about the dad who doesn’t believe in his son, scoffing at his potential to achieve anything even at the late date of his son actually appearing on the living room telly, ready to make an Olympic jump that the father may or may not deign to watch? How about the mother who is the polar opposite to this man, offering every last platitude she can borrow from a greeting card while being willing to stake the family’s entire savings on Eddie’s unlikely and financially unrewarding dream? How about the British Olympic official so snarky about Eddie’s qualifications and general makeup that he seems to be actually rooting against the positive publicity generated by his athlete? How about the fellow British Olympian who hazes him into missing the opening ceremonies, apparently purely for sport?

The only actor who breathes anything unusual – unusual and successful, we should say – into his performance is Hugh Jackman as the washed-up American jumper who is now an alcoholic and driving the plough that grooms the slopes. Naturally, he’s going to be conscripted into helping train Eddie (cue insipid montage). Jackman actually seems to be having fun with this thankless role, as the Aussie plays a man so American that he’s got an American flag painted on the side of his flask. It’s more likely that Jackman’s massive reserves of natural charisma are just compensating for yet another clichéd piece of writing. Still, he does have one pretty fun scene where he straps on the skies and completes an improbably long and dangerous jump while smoking a cigarette and swigging from a bottle of whiskey. Even within a generally successful scene, though, the movie’s technical weaknesses are underscored, as Jackman’s digital insertion onto the ski jump is downright distracting. Not as distracting, I suppose, as the several spectacular wipeouts that were clearly created on a computer screen with CG skiers whose ragdoll bodies jerk around unnaturally as they tumble down the mountain. Eddie the Eagle is one long, slow wipeout that unfolds over the course of 105 minutes, with ever-great wincing on the part of spectators.