"Elvis is indeed a quintessentially Luhrmann-style tapestry of image and music and sound and fury, and because this subject befits his approach more than any Luhrmann has had, it feels epic even by his standards."

"Whatever a person’s thoughts on a wall of sound style of filmmaking Phil Spector would appreciate, there can be no denying the find Luhrmann has in Butler."

Native son Baz Luhrmann divides Australians just as he divides the viewing public in general – maybe a bit more passionately since we feel a personal stake in it. Some do, indeed, claim Luhrmann as a source of pride, and won’t tolerate any badmouthing of the erstwhile Mark Anthony Luhrmann, defending even the less-critically acclaimed end of his output. (Yes, even Australia has a place in their hearts.) Others, perhaps a larger number, will tell anyone within earshot that it’s Luhrmann’s filmmaking they won’t tolerate, with its bells and whistles and razzle dazzle and jazz hands, like the man is an affront to Australians with whom they don’t want to associate. The running start for this second group has been a lot longer as Elvis, his latest, has been in the news since the start of the pandemic, this set being where Tom Hanks became the first big celebrity to contract COVID.

Nothing about Luhrmann’s Elvis biopic will move either party from their entrenched positions, but it just so happens you are currently reading a member of the former group, even if his claim to being Australian is through marriage and residency only. Elvis is indeed a quintessentially Luhrmann-style tapestry of image and music and sound and fury, and because this subject befits his approach more than any Luhrmann has had, it feels epic even by his standards.

While using cutting edge technology to create his symphonies, Luhrmann infuses his films with a certain throwback quality – a throwback to a time when emotional truth was more important than naturalism, when characters talked directly to the camera, when the size of life was just a jumping off point. With Elvis, he’s also thrown us back to the older school of biopics, where the life of the character was considered in essentially chronological order from youth to death. For at least a decade now biopics have been lashing out against this quaint standard, focusing on a defining period of the character’s life, but Luhrmann is just the type to give us permission to embrace the old ways. And that’s what gives us an Elvis where the sense of emotional truth is strong.

The man talking to the camera is Colonel Tom Parker (Hanks), from his 1997 death bed in a Las Vegas hospital. Parker of course managed Elvis Presley basically from the beginnings of his career, “discovering” Elvis only in the same way that Elvis “discovered” his own style of rhythm and blues music – essentially, he took someone else’s hard work and rewrote the narrative that it was his own. Having been accused by an angry public of being responsible for Elvis’ death – a charge that gained validity once the extent of his manipulation and financial abuse of the star was revealed – Hanks’ Parker sets out to create a portrait of Presley that tells the whole story. After nearly two hours and 40 minutes, it certainly feels like that has been accomplished.

Austin Butler plays Elvis in all but his early years. We see the young Elvis – forced by financial hardship and his father’s imprisonment to be the white family living in a Black neighbourhood – discover gospel music in revival tents, so moved by the power of it that his body quakes and gyrates. We see him instinctively employ those gyrations in a sexual manner at the performance that gives him his first exposure, as an opening act for the clean-cut country music act Hank Snow (David Wenham). We see him surpass Snow as the headliner on the tour and Parker drop Snow to manage Elvis exclusively. We see the explosion of Presley as a controversial crossover star who whipped political conservatives into a frenzy, both for his flirtation with Black culture and his inducement of sexual thoughts in teenage girls, whose reduction to scream ids is depicted perfectly through Luhrmann’s filmmaking. 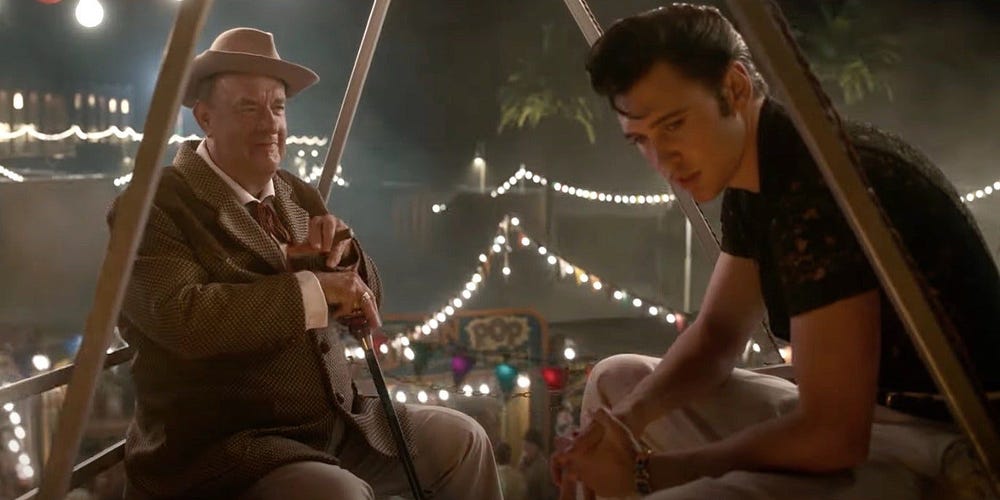 And we see Parker’s attempt to transform him into someone the government didn’t want to jail, first by changing his outfits, then by conscripting him into the military, then ultimately landing him as a movie star and eventual Vegas mainstay increasingly reliant on pills to stay standing on two feet. Meanwhile, we see Elvis’ dreams of touring the world scuttled for reasons of “security,” according to Parker – though it was really that Parker didn’t have a passport, having conjured a fake identity (he was born Andreas Cornelis van Kuijk in Holland), and that Parker’s debts to Vegas casinos meant he had to keep Presley in residence to avoid his own financial ruin.

Whatever a person’s thoughts on a wall of sound style of filmmaking Phil Spector would appreciate, there can be no denying the find Luhrmann has in Butler. The actor was known primarily for TV work and a small role in Quentin Tarantino’s Once Upon a Time in Hollywood, but it’s hard to imagine a screen presence who could more instinctively channel Presley’s incendiary charisma. He looks like him, he talks like him, that’s all there – but to really believe the impact Elvis had on people, an actor has to exude an additional electricity, and Butler has that in spades. Impersonating Elvis would be a party trick that thousands of others have done well enough over the years, but Butler sets himself apart by revealing the soul of one of the most famous celebrities of all time.

Hanks has a tricky role, too, in that he’s buried under latex. It’s the sort of choice that can come to exemplify the failure of a misfire, but Hanks makes it work, offering his own complexities to the portrayal. Parker reveals that Elvis was the showman and he was the “snowman” – the carnival-trained huckster who was skilled in relieving money from the wallets of marks and leaving them only with the smiles on their faces. Hanks’ Parker is honest about his grasp on the entire breadth of celebrity and how he intends to exploit its marketing possibilities. Among his early run of Elvis merchandising, there are both buttons that say “I love Elvis” and “I hate Elvis” – which is certainly in conversation with our modern understanding of internet culture. It’s all part of the show.

Speaking of the modern elements Luhrmann is known for inserting in his work, there’s some anachronistic use of hip hop here, which attempts both to translate Elvis’ persona to younger audiences, and to grapple with his uneasy relationship with Black culture. We see Elvis’ interactions with eminent Black artists of the time such as B.B. King (Kelvin Harrison Jr.) and Little Richard (Alton Mason), and though these musicians are depicted as embracing him, it’s telling that they disappear from the narrative as it goes, their reactions to his stratospheric rise unseen. The end result of Luhrmann swooping down into Elvis’ life is a portrait of a man struggling with an unprecedented level of fame, trying to do the right thing but ultimately drowning under the pressures and machinations of others. The character of Elvis’ father, Vernon (Richard Roxburgh), may be the best surrogate for understanding what it was all like. He watches helplessly as things slip out of his control, as his role of father figure is usurped by Parker, as Elvis and Parker run roughshod over his attempts to manage Elvis’ finances. It’s a small role, but Roxburgh’s expressions of ineffectual resignation speak volumes about what they were all up against. 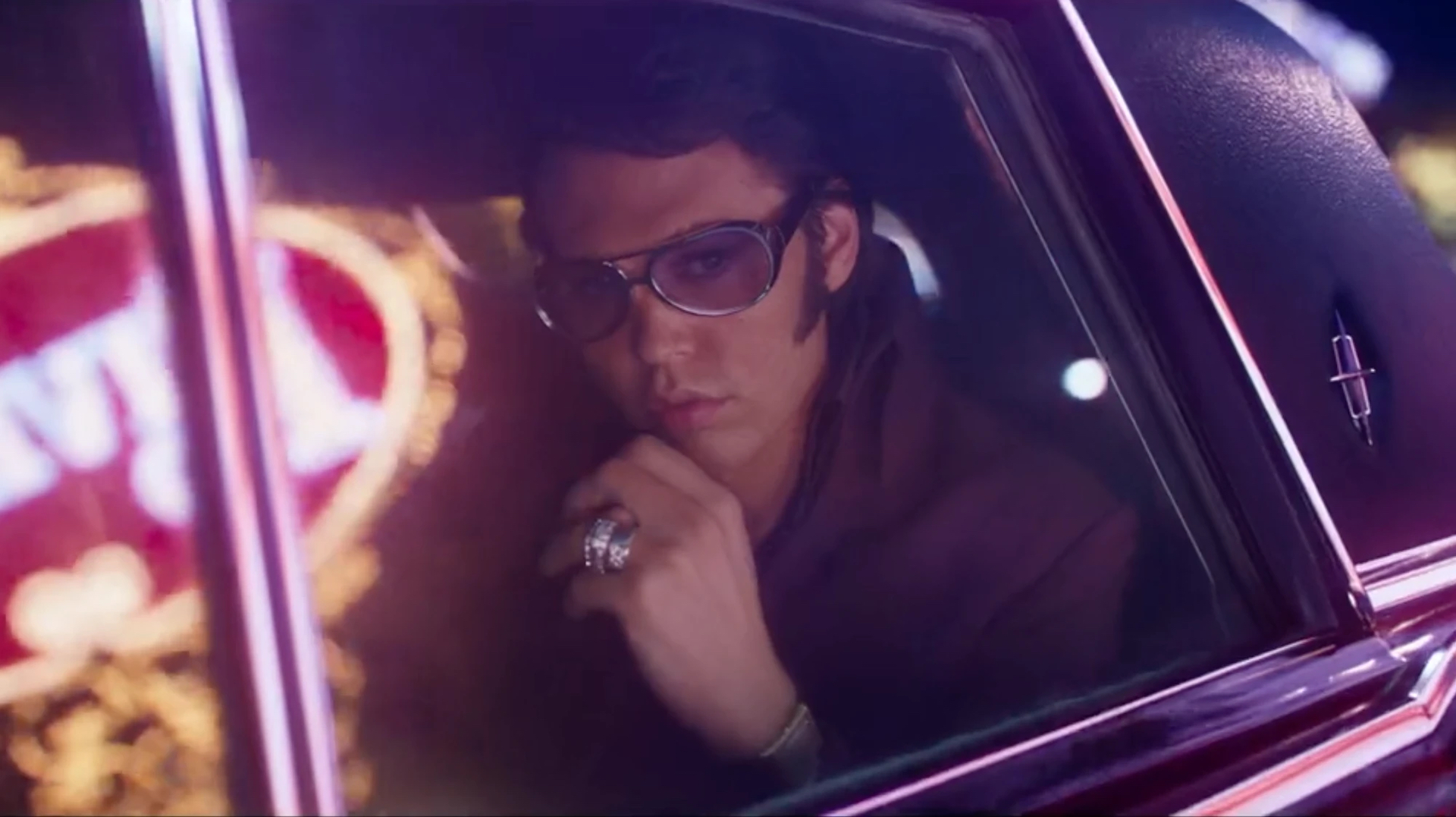 Cinephiles who don’t like Luhrmann don’t want him to do what he does better, they just don’t want him to do it at all. Elvis returns the verdict that the man who hasn’t made a feature film since 2013’s The Great Gatsby is still at the top of his game and then some. Anyone who likes what that man does should love this.

Elvis is currently playing in cinemas.