"Ghost in the Shell doesn't so much explore ideas as it does regurgitate them from superior pieces of fiction that predate it."

"Film is image, literature and sound. Sanders has image down pat, but perhaps too much. "

Philip K. Dick once asked whether androids dream of electric sheep. The novel within which Dick posed that question was adapted into the Ridley Scott film Blade Runner. Whether Dick was the first to touch on the subject of what it means to be human using technology as a narrative conduit, I’m not sure. I doubt it. But Dick’s novel, “Do Androids Dream of Electric Sheep”, is certainly the first and early work of fiction that comes to my mind in relation to that theme.

What I know is that the train of thought on the subject didn’t end with Dick’s novel, or Scott’s adaptation. Many science fiction works have explored the the concept of technology on the brink of humanity in the forty-nine years since Dick’s novel was released, to varying degrees of success. Blade Runner is one of the finest examples. Rupert Sanders‘ Ghost in the Shell is the most recent; the next in a line that will undoubtedly continue beyond today. But Ghost in the Shell doesn’t so much explore ideas as it does regurgitate them from superior pieces of fiction that predate it. 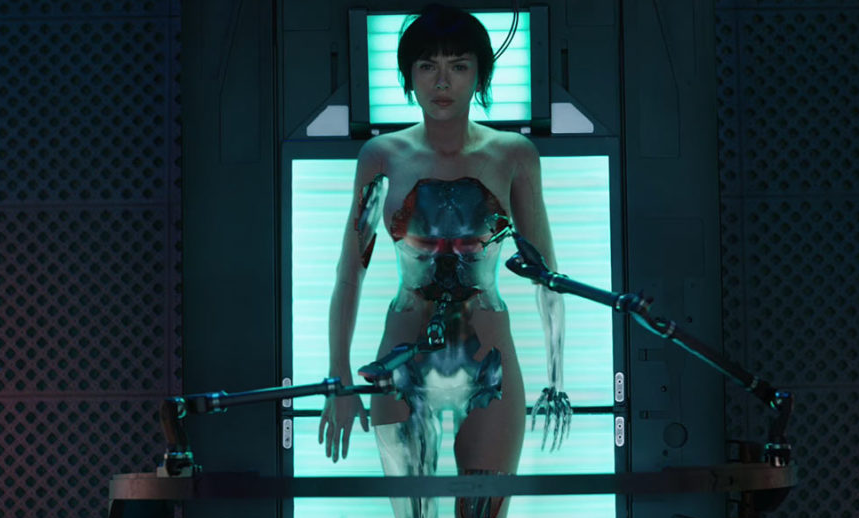 Twenty-two years ago, the world of Mamoru Oshii‘s animation Ghost in the Shell (1995) was the distant future. The futurist Ray Kurzweil has predicted that singularity will occur sometime around the year 2045, an occurrence that the years since Oshii’s film (of which Sanders’ is a live-action remake) has helped engender. Yet, despite those twenty-two years, Sanders has far less to say about any of the themes that his film touches on than Oshii ever did. In fact, Sanders has nothing to say at all.

This is a science fiction content with merely pretending to say things, and an inclination to over explain. Every momentary lapse into something compelling is immediately illustrated with a clarity that renders interest void. High concept sci-fi is only interesting when it makes you think, not when it does the thinking for you.

The Major (Scarlett Johansson) is a cyborg. Her brain is human, saved from a dying girl, but the rest of her is synthetic. Created by the motherly Dr. Ouélet (Juliette Binoche) for  the Hanka Robotics company, Major is the field commander for a counter-cyberterrorist team that goes by the name of Section 9. Are you surprised to learn that Major, as part human, part machine, begins to question her degree of humanity as the film progresses? It’s been a long time since the original Ghost in the Shell, and Sanders’ iteration rips off the films that ripped it off.

Film is image, literature and sound. Sanders has image down pat, but perhaps too much. There are a lot of clever images in Ghost in the Shell and not enough clever ideas, or perhaps the clever ideas just aren’t executed cleverly. Sanders’ confidence in imagery and his own sense of style may be the film’s burden. Slow motion can enhance cinema wonderfully, but sometimes there can be so much of it that it allows the audience enough time to grasp that there’s actually no content to coincide with it. That’s the Sucker Punch Effect. If you don’t know what I’m talking about, then you’ve been spared at least one of Zack Snyder’s contributions to popular culture.

“A copy is merely a copy,” one of the characters in Oshii’s film declares without understanding the poignant precognition of the comment. Rupert Sanders Ghost in the Shell is a copy of a copy of a copy, and maybe even more copies than that. I’ve seen Oshii’s film, once and a while ago, and my knowledge of Japanese animation is narrow,  but all I remember from watching the original Ghost in the Shell was that it made me think, and think hard. Watching Sanders unnecessarily sexualise Scarlett Johansson repeatedly made me think about sexualised Scarlett Johansson, and not even that hard.

Of course, judging a film on it’s own merits is what I should be doing. Oshii’s Ghost in the Shell is one thing and Sanders’ Ghost in the Shell is another, and my responsibility as a film critic ought to ensure that my knowledge of the former ought not to reflect in my regard for the latter. So, here are my thoughts on Sanders’ film without taking Oshii’s into account  – it’s really bad. There’s something quite unintentionally acute about a film that deliberates on the reality of a soul that is itself entirely soulless.