Watching Gravity in 3-D in an IMAX theatre is unlike any film experience I’ve ever had. There has always been a degree of separation between a film and its audience, like the invisible glass between Indiana Jones and the cobra in the snake pit in Raiders of the Lost Ark. Such is the nature of film – it mirrors real life, but has never been able to completely recreate it. Alfonso Cuarón’s Gravity is such an assault on the senses there are times in which the barrier between film and audience is almost lifted. It is the closest most of us will ever come to experiencing life in space.

Gravity is thematically and narratively simple. It’s not a film of ideas, like Kubrick’s 2001 or Cuarón’s own Children of Men were but rather a 90-minute celebration of the emotional power the film medium holds over us. There is very little downtime. From the astonishing opening tracking shot (as I left the cinema, people were guessing it lasted as long as 45 minutes – I’m not so sure) until the closing seconds, Cuarón’s film keeps us firmly in its grasp and never lets go.

The story follows the peculiarly denominated bio-medical engineer Ryan Stone (Sandra Bullock) and expert astronaut Matt Kowalski (George Clooney) as they install some new hardware into the Hubble Space Telescope. Kowalski is a space veteran on his final mission, but it’s Stone’s first time and we get the impression that she’d rather be home in Lake Zurich, Illinois. They get warning from NASA in Houston that debris from a Russian anti-satellite test is heading their way, but the caution comes too late. The debris hits, Stone is cut loose and is subsequently knocked into space, drifting with no lifeline. 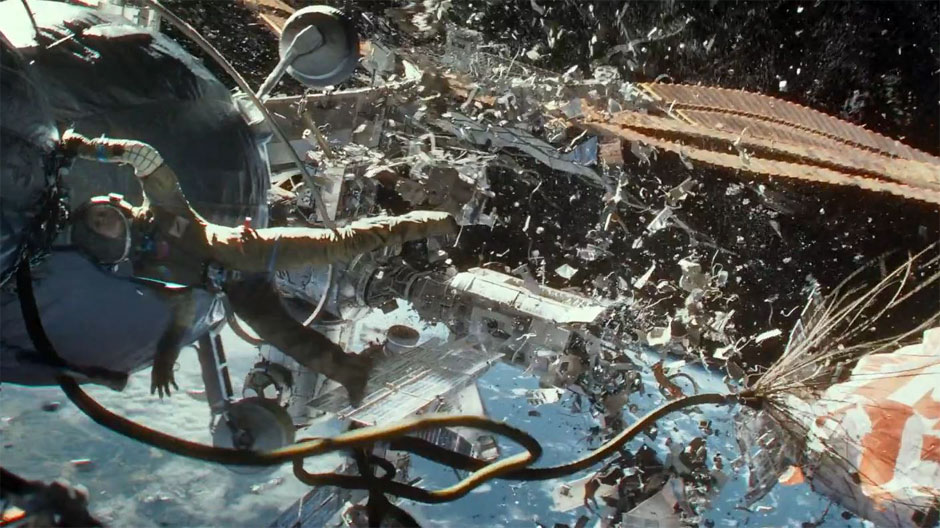 Cuarón was wise to pick two actors with already well-established public personas. George Clooney is essentially playing George Clooney in a space suit. We already know these characters, from the previous work both actors have done. Cuarón has even cast Ed Harris as the voice of NASA back in Houston, doubtless because of his similar role in Ron Howard’s Apollo 13. There is no need for much character development. That’s not what Gravity is about. The few exchanges in which we are given glimpses into Stone and Kowalski’s personalities are really only there to propel us into the next breathtaking set piece.

Bullock’s Stone quickly becomes the focus of the film, and functions almost as an emblem of the human spirit. We hear about some of her past difficulties, but ultimately they could have been anything. Stone’s story of struggling through monumental adversity is universal, it just unfolds in a particularly challenging environment. Bullock is absolutely fantastic in the role, and despite my prior apprehension I cannot think of another actress who could have played Stone with such command.

Gravity is not an easy film to review, because the whole 90-minutes feels like one broad stroke. That is not to imply Gravity is an empty film. It’s not, but there are none of the small elements to scrutinise that most great films have. Gravity is a great film no doubt, but it’s a tsunami of raw energy. I cannot recommend seeing it on the biggest screen possible more, and in 3-D despite the technique still being something I’m not sure is entirely necessary in the film industry. Until I see Gravity again, in a normal cinema, it’s difficult for me to write coherently for it as a film, because what I witnessed was more of an experience than a film. Space has never seemed so daunting and so infinite.