"How much a movie scares you can be a function of how much you think it’s going to scare you."

"Hereditary examines the pain of both the natural and the supernatural occurrences in its characters’ lives. "

How much a movie scares you can be a function of how much you think it’s going to scare you. If you don’t think a movie is going to scare you, and then it scares the shit out of you, that’s good. But being prepped for something to be scary can also be good, because you watch it with a paralysing sense of anticipation. I first watched Dario Argento’s Suspiria knowing that some people consider it the scariest movie ever made, and that its first 15 minutes were supposed to be particularly intense. So I watched with an unbearable fear of the unimaginable things I was going to see, and it did not disappoint, especially during those first 15 minutes.

Not every movie can be Suspiria. A24 is trying to tell us that Ari Aster’s debut film, Hereditary, is. Or more accurately, that it’s this generation’s The Exorcist. Either would be a very high bar for any movie to clear – not quite as high a bar as the Evil Dead remake, which claimed on its poster to be “the scariest movie you will EVER see” (emphasis mine), which discounted the output of all future horror filmmakers, and therefore was patently ridiculous. 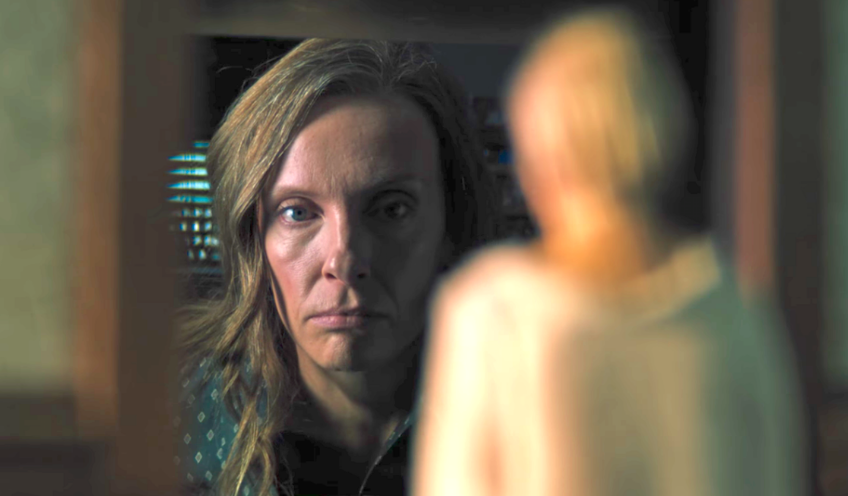 So no, Hereditary is not as scary as Suspiria or The Exorcist, or as scary as Evil Dead thought it was going to be. And that’s both disappointing and probably inevitable when a movie is hyped as much as this was coming out of its festival appearances. It is, however, frightening in ways that are not so innately related to the horror genre. Aster’s film deals with everyday type horrors and very unusual type horrors, and the distributor is clearly pushing the latter as what’s so frightening about it. They should be pushing the former.

Purely in terms of style, Aster is taking the horror genre by storm in a way reminiscent of other recent horror debuts – if not actual debut films, then debuts in the horror genre by those directors. It’d be easy to think of either It Follows or The Witch, especially The Witch, when watching this movie. That’s because Aster’s confidence with the camera rivals that of David Robert Mitchell and Robert Eggers, respectively. Hereditary looks magnificent, from its camera tricks and movements to its production design, and a sustained sense of dread permeates from the first moment. Alas, the failure to fully pay off that dread limits some of its effectiveness. 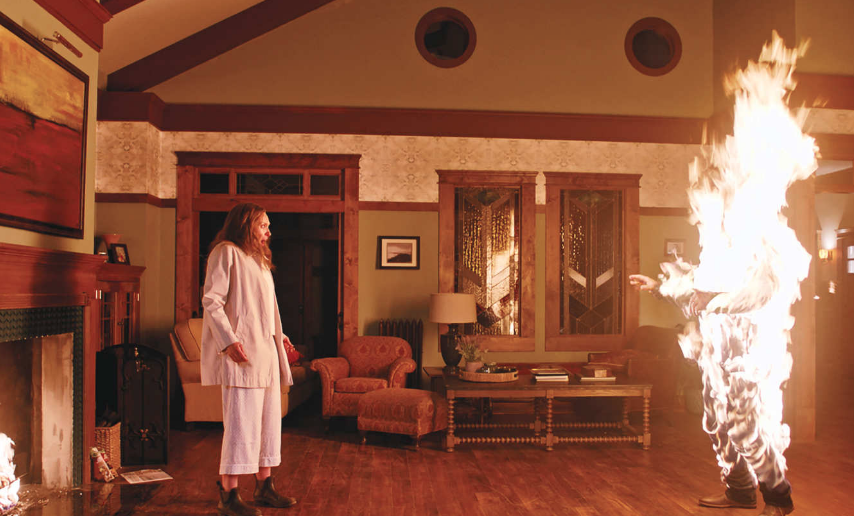 Annie Graham’s family appears to be cursed. Her mother has just died under rather ordinary circumstances, but the same can’t be said for her father, who was mentally ill and starved himself to death, or her brother, who hanged himself and blamed her mother for “putting people inside him.” But that was ages ago. Now, Annie (Toni Collette) is the matriarch of her own family, which includes her mild-mannered husband Steve (Gabriel Byrne), her stoner teenage son Peter (Alex Wolff) and her oddball younger daughter Charlie (Milly Shapiro).

At her mother’s funeral Annie talks about how her mother was secretive to the point that it made it difficult to love her. Annie chalked that up to an ordinary personality defect and a hard life, but as she goes through her mother’s things, she realises there may be something more exotic to the secrets she was keeping. As it turns out, her mother’s death will be just the first in a series of new occurrences that will start to make her question everything – including her own sanity, and why she had a mysterious sleepwalking episode a few years back in which she doused her children and herself in paint thinner and struck a match. 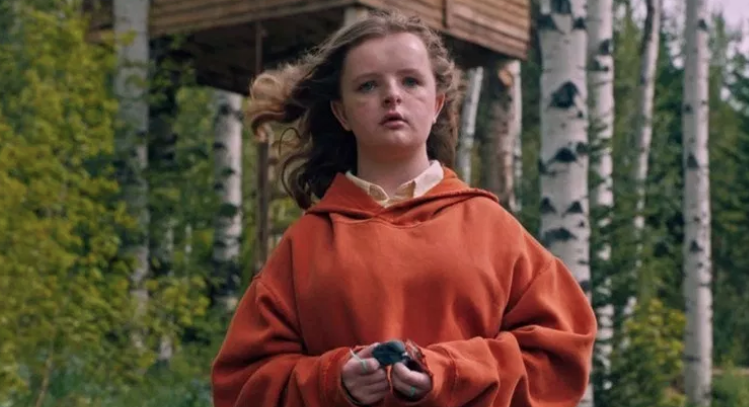 As mentioned earlier, Hereditary examines the pain of both the natural and the supernatural occurrences in its characters’ lives. Those things we could imagine actually happening to us prove far more terrifying, and that’s where the film’s MVP comes in. Australian Toni Colette has had an acclaimed career that has included an Oscar nomination in another promising horror debut, M. Night Shyamalan’s The Sixth Sense. She does a similar thing for that movie as she does for this one, injecting grief and emotion into a character who might ordinarily have been more of a functional mechanic of a horror script than a flesh-and-blood person.

Yet even in a career of fully committing to the material time and again, it’s possible Collette has never been this committed or this nuanced. She “cries ugly” like nobody else in the business; one wonders what her process is to get herself so believably and frighteningly worked up. Yet this is not a performance that expresses itself only in big moments, as Collette is also processing new information and expressing inner turmoil through the tics and hesitations in her face and speech. This performance is like an acting master class. 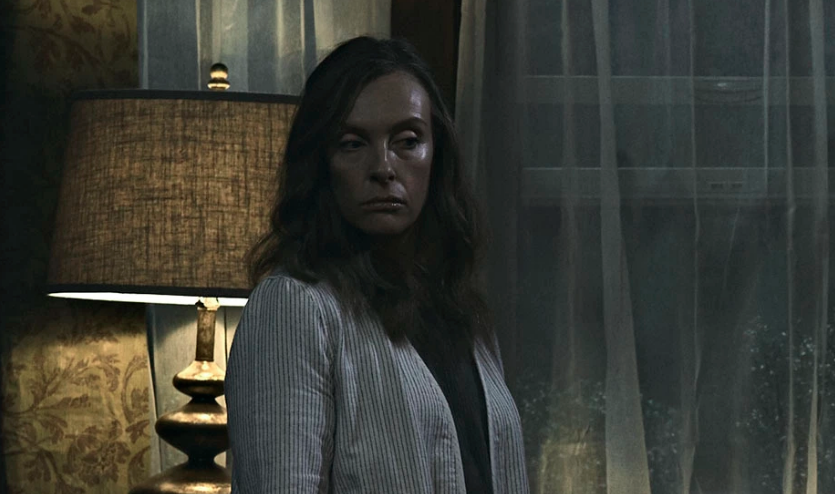 Collette is very capably supported by Byrne, whose necessary underplaying of the material should not go unnoticed, and Shapiro, who may just become a new standard bearer for creepy children in horror movies. But an unexpected dose of support comes from Alex Wolff, playing the film’s other key character, her son. Unexpected because when he co-starred in last year’s Jumanji remake, it was tempting to imagine him possibly carrying a couple teen dystopia movies and maybe not much else. Hereditary proves how much more capable than that he is.

The thing that he and Collette share in common is that their characters are tormented by real things that happen in this story, that might happen to any person, and the ways they react to those things are the film’s bedrock frightening element. Wolff’s Peter endures a trauma that would scar anybody for life, and it’s his response to this trauma that really gets under the skin. 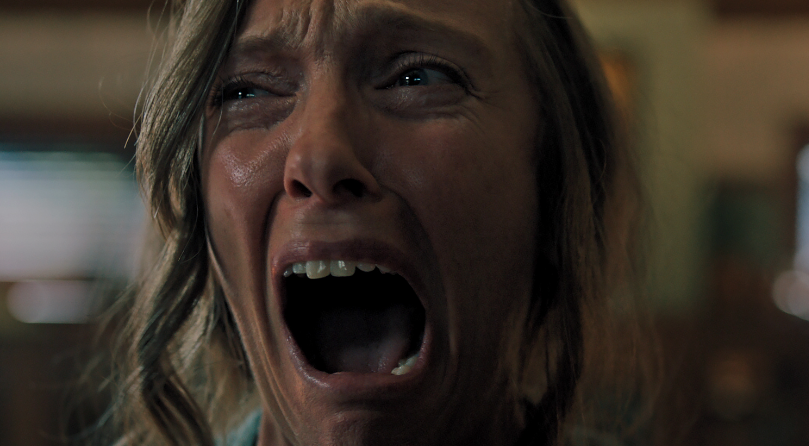 To be clear, there are shocking images in this movie. One in particular may haunt you that night in bed. But Hereditary seems clearest in its depiction of the ways in which we damage each other under ordinary circumstances, and that’s in part due to the way it follows through on its traditional horror elements. Some of them are shocking, but they don’t usually obey a particular set of rules, and sometimes contradict their own logic. They end up feeling like a grab bag of admittedly well executed horror tropes thrown at the wall to see what sticks, rather than an identifiable outgrowth of the story.

What sticks about Hereditary is its warped but recognisable human drama, and the actors who deliver it. Its writer-director should be delivering plenty of other films that stick in our consciousness as he blossoms and matures.