Two Little Boys is a dark comedy from New Zealand director Robert Sarkies. It stars Bret McKenzie of Flight of the Conchords fame, and Australian comedy, radio, and occasional TV star Hamish Blake in his first major film role. You’d think with a pair like this, you might be in for some comedy gold. Sadly, although the film has its moments, it drags and most of the jokes fall flat. 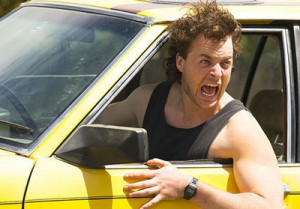 Nige (McKenzie) is having a bit of bad luck – his relationship with his on again, off again girlfriend is currently off, and he’s just run over and killed a Swedish backpacker in his car. In a state of panic, he runs to Deano (Blake), who has been his best friend since primary school. Deano does what a best friend would naturally do – he helps Nige hide the body and tells him to pretend like nothing has happened. Problems arise however, when Nige’s friend Gav (Maaka Pohatu) notices the backpacker’s passport in the back of Nige’s car. Despite the fact that Gav cheerily accepts Deano’s explanation that he ‘found’ it, Deano, in what I can only describe as a mixture of paranoia and jealously of Gav’s friendship with Nige, convinces Nige that they should take Gav out on a holiday, where he decides that Gav’s life must end.

First of all, all credit to the director for Hamish Blake’s Deano. If you met someone like Deano in real life, you would probably do all you could to avoid them, a fact which Nige is only just beginning to realise now that he has the friendly, relaxed influence of Gav in his life. What Sarkies has also seemed to realise, is that it’s no use for Blake not to act or perform in any other way than what we have come to know and expect. It is a really strangely natural performance, and I had to wonder how many of his lines were ad-libbed. 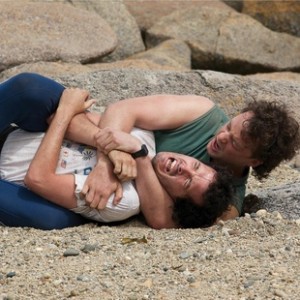 The problem is that Deano is in fact so repulsive a character, that I just couldn’t like him, and hated having to spend so much time with him on screen. Because of that, what should have been funny just came across as stupid and annoying. Nige, for the most part, is completely weak-minded and easily influence by Deano. Gav is the only really likable character in the film, and Deano randomly decides he wants to kill him! Even though it’s all one, big, well-meaning but hugely inappropriate attempt to help his friend, his attachment is unhealthy, and strangely disturbing.

It’s not a complete loss – the soundtrack is great, there are some amazing shots of New Zealand that reminded me yet again why I want to visit there, and there is a laugh or two to be had, but they are few and far between. Sadly, a factor that impacted my enjoyment was that occasionally, the music was so loud that I couldn’t hear what the actors were saying over the soundtrack. I’m sure this was just a tech issue within the cinema itself, but it did cause me to lose focus.

Two Little Boys is out on November 15