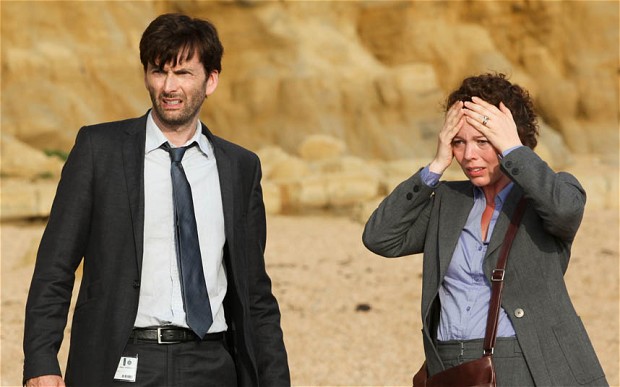 There’s a telling moment towards the end of The Counselor, the 2013 Cormac McCarthy-penned thriller, when the head of a drug cartel explains to Michael Fassbender’s character that “at some point, you must acknowledge that the new world is at last the world itself … the world in which you seek to undo your mistakes is not the world in which they were made.” It’s at this point one fully realises the fate of Fassbender’s character. Whether he likes it or not, there’s no going back. It’s a realisation marked by choice and transformation, themes that have been much explored in both film and television in 2013. On the small screen, perhaps no two shows have explored these themes more thoroughly and earnestly than the British series’, Broadchurch and Southcliffe. And like The Counselor, these shows at times, may not be the easiest to watch; nevertheless, the emotional pay-offs are well worth the viewer’s effort.

On paper, the series are very similar. They are both set in small, fictional British towns. Their narratives are framed by murder. They both explore themes of grief, loneliness, loss and faith. They both elicit extraordinary performances from their ensembles. And they are both extremely nuanced studies of human relationships centred on tragedy. But there are subtle differences in narrative and form that distinguish the series from others, and indeed themselves, permitting both series to stand up to deeper critical analysis, while creating a veritable feast for the senses.

Broadchurch is set on the Dorset Coast and follows the murder investigation of an 11- year-old boy, Danny Latimer. Leading the investigation is local detective, Ellie Miller (Olivia Coleman) and recently transferred detective, Alec Hardy (David Tennant). The series, created and written by Chris Chibnall, utilises the ‘whodunit’ mystery format to explore this seemingly perfect English town, running a fine-tooth comb over the characters and airing plenty of their dirty laundry. In comparison, Southcliffe unfolds in a small market village in the North Kent Marshes, providing a much eerier landscape, replete with thick, ominous fog and constant drizzle. Following the tragic massacre of fifteen townspeople, Southcliffe uses a former-local, now national TV news reporter, David (Rory Kinnear), to act as our guide through the town and attempt to uncover answers for the abhorrent acts of the killer.

Admittedly, I went into Southcliffe not knowing much about the show. All I knew was that it was the second major directing project for Sean Durkin, who had written and directed 2011’s excellent Martha Marcy May Marlene, and that it starred Sean Harris (who delivered one of the most terrifically-sickening performances in 2009’s Harry Brown). Simply stated: Durkin’s direction is flawless. The miniseries is decidedly minimal in form compared to Broadchurch. Durkin uses only diegetic music, provided in the form of car radio and live bands. The series is marked with a nonlinear narrative, cutting back and forth in the immediate events leading up to the tragedy, as well as back to when David was a child. The only temporal bearing the viewer has is a radio-shipping forecast that acts as a quasi-Groundhog Day navigation of the tragic unfolding. However, Durkin’s deft direction allows the viewer to overcome any sense of nonlinear confusion, which is remarkable on its own.

Broadchurch is slightly richer in its form. Composer Olafur Arnalds beautifully scores the series, which only serves to propound the drama, rather than overbear it. Directing duties are split between two (James Strong and Euros Lyn) keeping a consistent style throughout the eight episodes. There is a fantastically effective use of slow-motion shots, never overused, always compelling, punctuating the series in a similar fashion to Southcliffe’s shipping forecast. The sheer emotional voracity of each shot is breathtaking, perfectly mirroring the transformative mood and world that the community in Broadchurch now inhabit.One of the many strengths of Broadchurch is its exemplary use of the ‘red herring’. In an attempt to maintain suspense and reality over the course of a series, most investigatory shows tend to underexplore the many suspects in a murder investigation, taking the viewer on an all too often underwhelming narrative excursion, exposing weak writing, and ultimately, serving to frustrate and belittle the viewer (the US remake of The Killing exemplifies this fatal error). Refreshingly, Broadchurch maximises the pay-offs from this story-telling device, principally on the back of well- written characters and their relationships. Each character arc has its own mystery and heartbreak and once the red herring is distilled it serves to inflect upon itself, creating a rich diegetic tapestry. The foundations of which are laid in the first few minutes of the series. There is a beautiful, fluid and continuous tracking shot following Danny’s father, Mark (Andrew Buchan), as he walks down the heart of a small town, the main street, introducing us to the central characters and their relationship to the dead boy’s family. This shot serves as a framework for the entire series and as the narrative progresses; the seemingly happy town starts to turn on itself under the weight of despair.Southcliffe on the other hand, chooses not to hide its killer from the viewer’s gaze. The identity of the murderer is made known to the viewer within the opening minute of the first episode, in a sequence that sets the brutal tone for the rest of the series. While Broadchurch is more concerned with the choices of the killer, the who and the why; Southcliffe chooses instead to focus its gaze on the transformation now upon the town’s inhabitants. As one involved character states, “shit like this just happens, you get over it [and] you move on. Stop wasting your time looking for answers.” These lines perfectly (and perhaps ironically) exemplify Southcliffe’s approach to the horrible massacre. Sometimes there are no answers to be found in these acts, searching just prolongs the pain unnecessarily. Indeed, the ‘whodunit’ is expelled quite visibly when Anna (Kaya Scodelario) tells her mother that she plans to take all of her Raymond Chandler books with her on her Gap Year, tearing the pages out as she reads them, and throwing them from the train window. Chandler of course, was one of the great detective fiction writers of the 20th Century, and Anna’s intertextual reference highlights Southcliffe’s distinct focus.

The heart of both series lies in their ability to provide an unbiased account of grief and loss through which their central characters, particularly Ellie (Broadchurch) and David (Southcliffe), experience a cathartic transformation. The community of Broadchurch has never experienced a murder before, and so for Ellie, as well as the community, the investigation is a completely new occurrence. With themes of grief and tragedy, religion often becomes an overbearing concern on the screen. To its credit, Broadchurch uses the character of the Reverend (Arthur Darvill) to great effect, understanding religion as a mechanism for grieving and faith, without pushing a religious agenda onto the audience. Likewise, an alternate view of faith in the form of a supposed spirit guide, Steve (Will Mellor), interjects to give a contrasting response to grief. When Danny’s mother, Beth (Jodie Whittaker), seeks the advice of a previous murder victim’s mother in a neighboring town, she is provided with the advice that grief is “an external thing like a shadow, you can’t escape it, you just have to live with it.” This advice serves as a forewarning and acknowledgment of the new world created after a tragedy, extricating the drama from the acts of killing.

Finding myself re-watching Broadchurch I was surprised how immersed I was in the story. Usually, with most ‘whodunit’ series, after the killer is revealed, the show or film often loses its edge. However, with Broadchurch, it was the complete opposite. If anything, I was more deeply affected by the broken relationships and devastating consequences in the new world that is created after such a tragedy. Southcliffe was slightly less accomplished in this sense. While there are some truly beautiful and heart-breaking moments in Southcliffe, the whole feel of the series collapses under its own heavy weight towards the end, petering out with a somewhat uninteresting narrative arc involving a brothel and Anna’s mother. However, there is enough originality and poise for it to sit appropriately (just) under Broadchurch in its ability to reframe such a difficult subject. And unlike the doomed characters in Cormac McCarthy’s film, there is a deep humanism present in these post-traumatic worlds that the characters inhabit, a world transformed by choice, loss and grief.