"The eccentric has always been fully present in the Greek director’s work, and that has usually tended toward an overall tone of black comedy."

"Lanthimos’ gift for directing actors through deadpan scenarios is unparalleled among current filmmakers..."

Watch out – another Yorgos Lanthimos movie is flying straight at your head. How better to describe the work of a man who’s made movies about adult children imprisoned away from the world by their parents, a service in which actors are hired to play the roles of dead loved ones, and a hotel where singles mingle to avoid being transformed into animals?

The eccentric has always been fully present in the Greek director’s work, and that has usually tended toward an overall tone of black comedy. Black comedy is the predominating mode of Lanthimos’ latest, The Killing of a Sacred Deer, but he’s also turning up his game from its already high level to explore his Kubrickian side. Deer seems to come straight from the subconscious of the man who made The Shining and Dr. Strangelove, while also reflecting the sensibilities of a modern-day heir to Kubrick, Jonathan Glazer (Under the Skin). This makes it unbearably tense, unnerving, and most of all, thrillingly visionary. 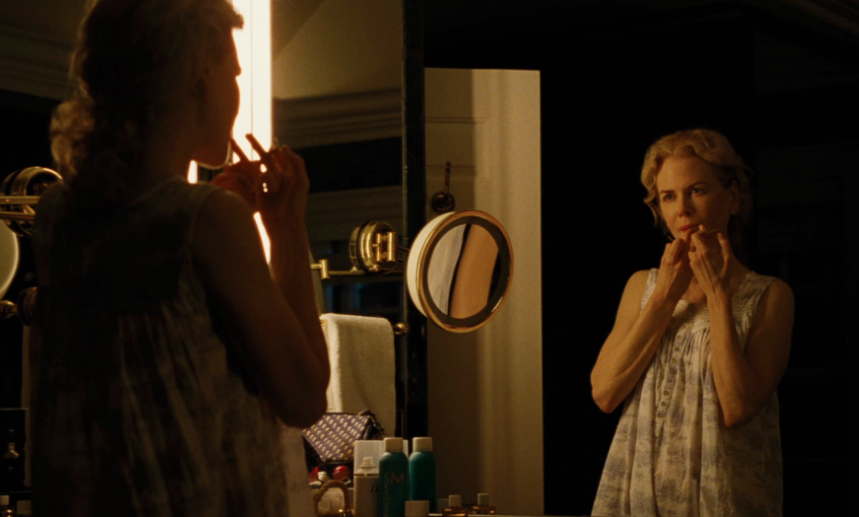 Colin Farrell is Lanthimos’ frontman again, as he was for Lanthimos’ English language debut, 2015’s The Lobster. The incredibly welcome deadpan phase of Farrell’s career has seen the star reborn from his matinee idol days, like Matthew McConaughey but without quite so much critical acclaim. The way Farrell releases little spasms of dialogue, all in his native Irish lilt, feels like it has already become emblematic of Lanthimos’ approach to filmmaking, even in just two collaborations between the two. It’s both straight-faced and incredibly funny, and with the assistance of his leading man, Lanthimos walks that tightrope between tones better than he ever has before. Which is really saying something, as that talent has always been one of his distinguishing traits.

The absurdist story du jour involves a heart surgeon named Steven (Farrell), who lives an apparently normal existence with his ophthalmologist wife (Nicole Kidman), teenage daughter (Raffey Cassidy) and teenage son (Sunny Suljic). However, a third young person by the name of Martin (Barry Keoghan) has a claim on him as well. Steven meets privately with Martin in cafes and other public spaces, and seems to have a paternalistic relationship to him, though there’s something left unsaid when they speak.

We come to learn that Martin has lost his own father, and is seeking some kind of retribution, intermingled with a desire for attention. We also come to learn that Martin has placed a curse on Steven’s family – a curse which, in perfect Lanthimosian logic, is completely unexplained in terms of what Martin is doing or how he’s doing it. When one of Steven’s children suddenly can’t walk, it becomes clear that Martin means business, and that his demands must be satisfied.

Doesn’t sound all that funny, does it? Yet as in his previous films, some more than others, you’ll find yourself cackling wickedly at some point, if not many points. Lanthimos’ gift for directing actors through deadpan scenarios is unparalleled among current filmmakers, and even if something really heavy is going on in the film’s plot – as it often is – his staging and other sensibilities push laughter out of our chests. 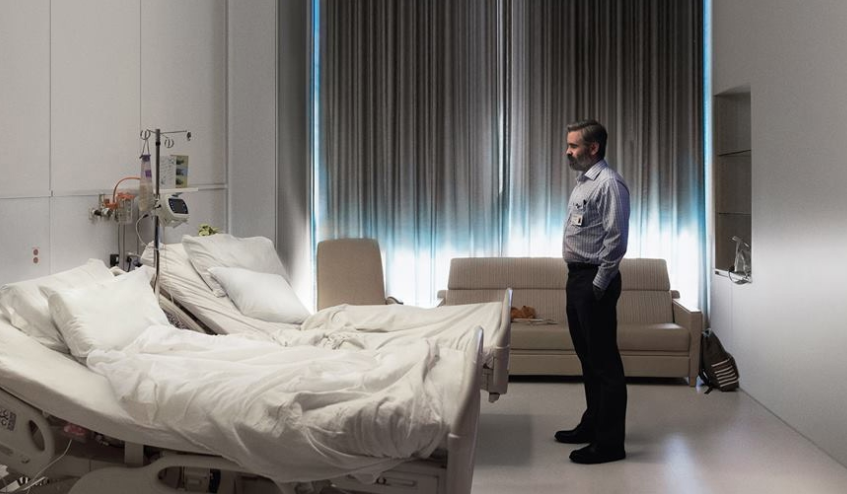 His actors never wink, even though there’s something bizarre under the surface that they are not naming. And though Farrell’s monotones are one way of exploring that absurdity, Lanthimos is not rigid in the acting style he demands. Nicole Kidman’s affect is entirely different from that of Farrell, though equally compelling, and Barry Keoghan contributes something almost indescribable to the canon of movie weirdos. He has some of the mannerisms of a young Joel Edgerton, but much more twisted.

What invites the comparison to someone like Kubrick is the choices Lanthimos is making with his camera. Never particularly renowned for his visual compositions, Lanthimos takes a big step forward here with a number of thoughtful and profound camera placements. In one recurring visual theme, he follows his characters down long hospital corridors from high angles, kind of the inverse of the low angle approach used by Kubrick on Danny’s big wheel trundling down the hallways of the Overlook Hotel. 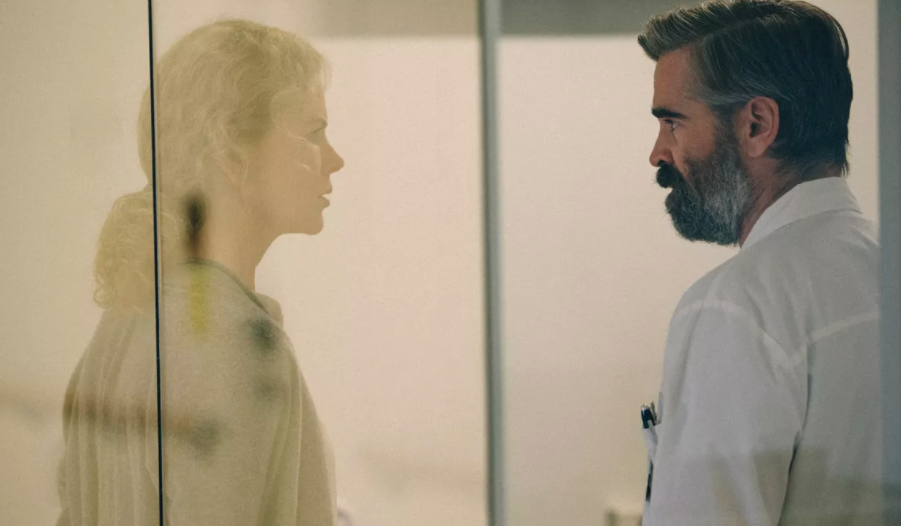 Then there’s one jaw-dropping extreme high angle shot, almost from the perspective of a deity cruelly chortling at his subjects, of a mother and a son on an escalator, moments before the son collapses in a state of paralysis. Another fascinating trick is the use of extreme close-up, which accentuates the oddly effective choices the actors are making with their faces. The musical choices from a variety of contributors become increasingly oppressive and unhinged as the action follows suit.

Lanthimos has long been an indie darling, but what he’s proving with the slightly more conventional plotting of The Killing of a Sacred Deer is that he can make inroads into transforming mainstream cinema. The scary thing is that he seems to be getting better. It’s an absurd world we live in, and who better to help us make sense of it than a man who can also make us laugh at the horror?