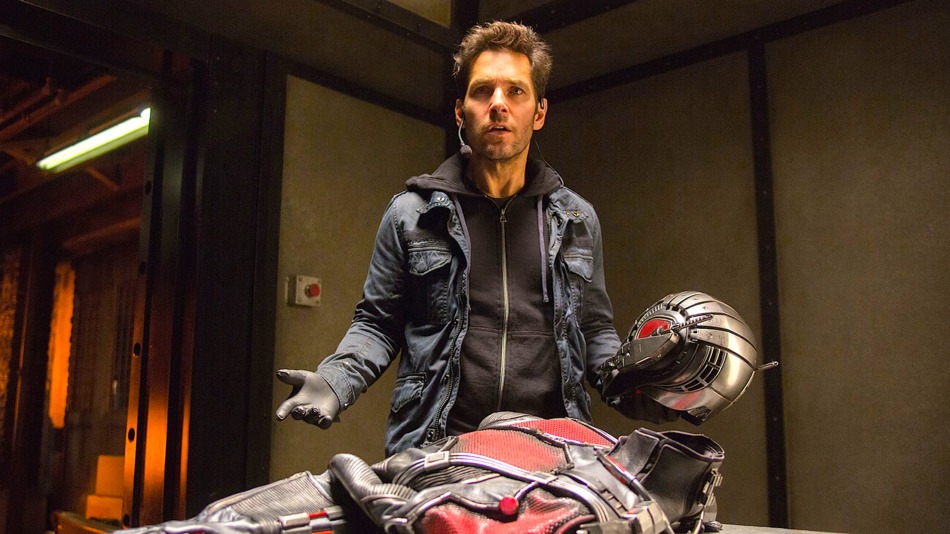 If ever there was a sign that Hollywood doesn’t take you seriously, surely it is Ant-Man; a film about a guy who shrinks himself down to the size of an insect in order to save the world.

This is the twelfth film in the ‘Marvel Cinematic Universe’ – and that’s not even counting other Marvel creations like the perpetually rejigged Spiderman. There’s almost a post-modern relationship between the studios and the fans with these churned out franchises, like Hollywood is daring us to fully commit to our dependent affair with it – no matter how shabby and abusively it treats us. So look at Ant-man as the big-budget equivalent to TV films like Sharknado or Snakes On A Plane; asking us just how stupid we’re prepared to go. Well, the jokes on you, Hollywood; if we could get through Ghost-Rider we can sure as hell get through this.

Paul Rudd plays Scott Lang, a good-natured burglar who stumbles across an old costume that – with the press of a button – can reduce its wearer to microscopic proportions. Lang is soon under the tutelage of Hope (Evangeline Lilly) and her father Hank Pym (Michael Douglas, always good) who invented the suit and, for a time, wielded it’s awesome power. Hank needs Lang to use the suit and his superior burgling skills to infiltrate the secret headquarters of supervillain Darren Cross (Corey Stoll, forgettable) and destroy any further remnants of the ‘ant-man’ technology before it falls into the wrong hands. Lang must gain full command of the microscopic world – including riding a flying carpenter ant into battle – if he is to succeed. He must also not succumb to the deadly temptations of the size-reducing suit. To put it finely, it might just be possible to go sub-atomic; so tiny that you can’t ever get back to full-size…Yeah. 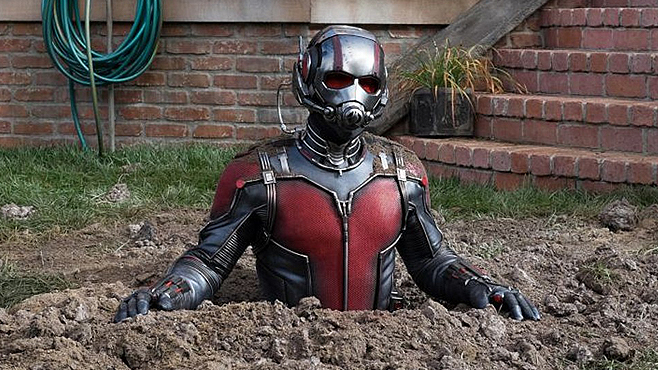 Ant-Man plays exclusively for laughs; the tone is self-consciously irreverent and tongue-in-cheek. There’s no city-destroying event that typically enlivens the superhero narrative; the stakes are (forgive the expression) smaller than we’ve come to expect and the resulting drama is insubstantial. In truth, the production feels a bit troubled. Edgar Wright (of Shaun Of The Dead and Scott Pilgrim Versus The World fame) wrote the film’s first draft and was set to direct, but left, citing creative differences. His pop-cultural sensibilities haunt the resulting uneven film, directed by Peyton Reed; which feels like the Marvel afterbirth of this year’s commercial juggernaut The Avengers: Age of Ultron (ReelGood wasn’t too keen on that film either). Paul Rudd’s had a great track record of saving otherwise unremarkable films, but here he’s not big enough to overcome the lack of any real dramatic energy.

That’s a shame, because Ant-Man could well have been amazing. The effects are mostly good, particularly in a fun sequence where our microscopic protagonist must fight the dastardly ‘Yellowjacket’ on a moving Thomas the Tank Engine train set. This is how Ant-Man should have played the whole way through; the superhero clichés subverted through a Honey, I Shrunk the Kids-style perspective where ordinary household items are rendered massive and grotesque, where life-and-death struggles take place over kitchen sinks and dinner tables. It’s definitely an opportunity missed.

Fortunately (or unfortunately – depending on whether you like this kind of thing) Marvel will have a chance to get the formula right when Ant-Man joins the superhero entourage in 2018’s Avengers: Infinity War.