"As much as Cinderella is right on representation and on modern depictions of female agency, Cannon knows that the lifeblood of any good jukebox musical is its songs."

"Most if not all of the expected story beats ensue, as there are even the three mice who become Ella’s footmen for the ball, one of whom is naturally voiced by James Corden."

It was only six years ago that Disney released its most recent version of Cinderella, in what was deemed (by them) to be a sufficiently modern retelling of the tale. That another new version was required so quickly – by Amazon rather than Disney this time – indicates just how quaint that movie already feels. Even then, and despite its success as a novelty item (Disney had only just started this trend of live action reboots), the movie was criticised for its blandness and – let’s say it – its whiteness. Minority actors were given token supporting roles with a dozen lines of dialogue apiece, but in all other respects it was like the 1950 animated version come to life.

A lot has changed for the good in those six years, and Pitch Perfect writer Kay Cannon now comes forth with the sort of Cinderella we probably should have gotten back then. The lead here (Camila Cabello) was born in Cuba before moving to the states, and her fairy godmother is played by a man: Billy Porter, a gay icon who is also Black. He’s only in one scene because that’s how the fairytale is written, but he gets more than a dozen lines of dialogue, and they are fabulous, including a very satisfying “Yasssssss!” (In fact, he’s called Fabulous-Godmother, or Fab-G to himself.)

This Cinderella is also a musical, which none of Disney’s versions can claim. Cannon, functioning as director as well as writer, did not have to write any songs, but rather follow the Pitch Perfect model of using existing popular music to illustrate the movie’s themes and accentuate its story moments. And though plenty of newer songs make their way into this jukebox musical, such as Ed Sheeran’s “Perfect” from 2017, it’s also got its chestnuts, like Queen’s “Somebody to Love,” Janet Jackson’s “Rhythm Nation” and Earth Wind and Fire’s “Shining Star.”

The movie does frequently shine. The refreshing approach combines with unabashedly modern dialogue to give Cinderella a certain zing and plenty of momentum. As you would expect, the title character has ambitions that go beyond landing her knight in shining armour. This Ella – the movie frequently reminds us that the “Cinder” prefix was chosen by her stepsisters to belittle her – wants to design dresses, a dream she hopes will allow her to see the world and support her financially. She don’t need no prince. (Incidentally, what is it with characters whose names are Ella, who are known by a variation of that name, and who want to design dresses? This also describes Cruella from the recent Disney live action reboot of the same name. Okay, Cruella’s given name is Estella, but it’s still pretty uncanny.)

There is of course a prince in this movie – can’t deviate from the story that much. And though he’s white and handsome in the person of actor Nicholas Galitzine, he’s introduced as a bit of a twit, complaining about how difficult it is to hunt foxes while you’re drunk. In fact, at first we wonder if the movie is going to totally undercut him, but pretty quickly we see that Prince Robert is just trying to break out of his own prison, not unlike Ella, though his is a prison of privilege. 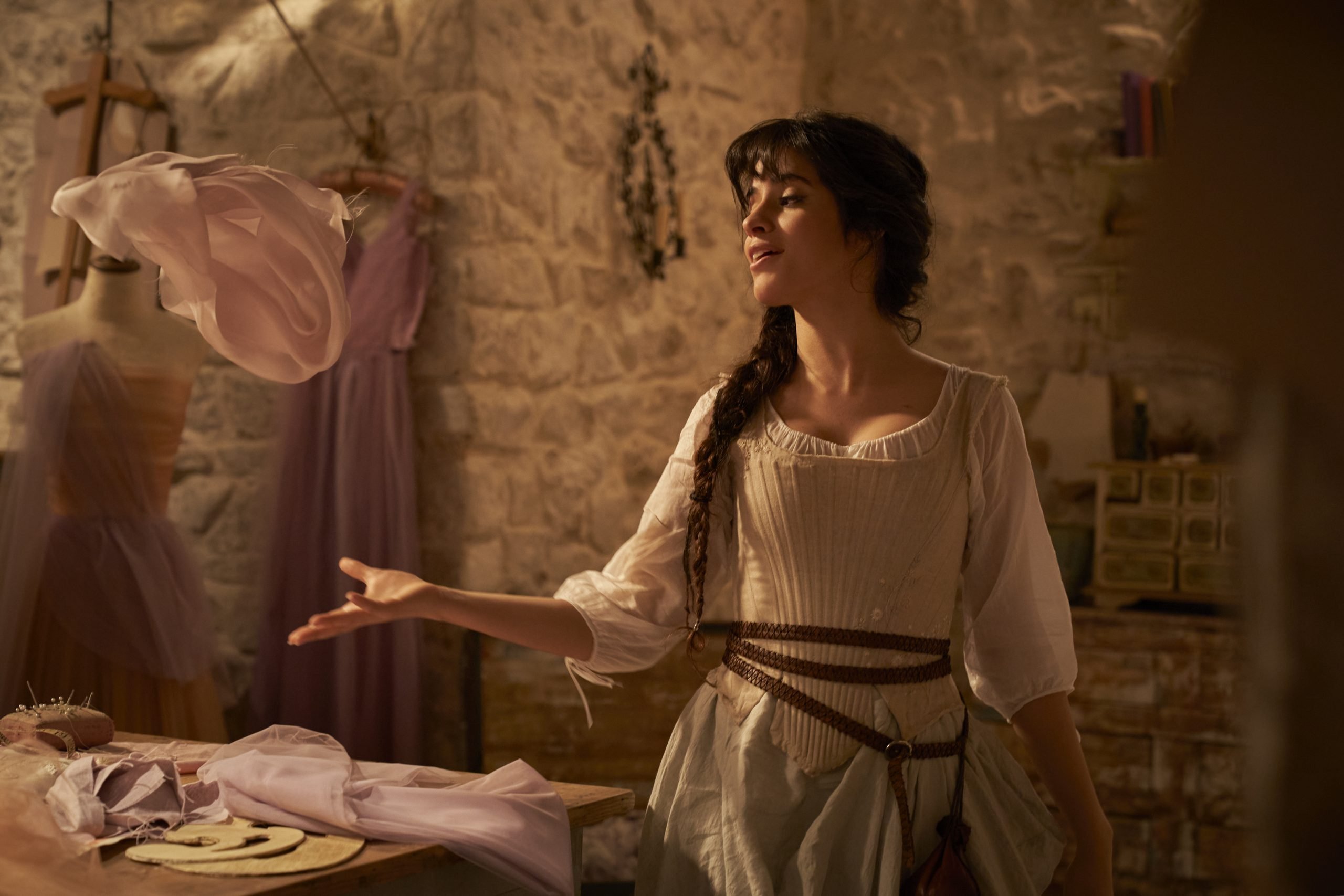 He disguises himself as a commoner to try to find a woman who won’t be drawn to him for the material advantages he can offer, and that’s where he and Ella meet in the town square, as she is trying to sell the dress she managed to make under the nose of her wicked stepmother (Idina Menzel, or Adele Dazeem, as John Travolta pronounces it). Robert’s warden is his father the king (Pierce Brosnan), though his mother the queen (Minnie Driver) does her best to soften the king’s rigidity.

Most if not all of the expected story beats ensue, as there are even the three mice who become Ella’s footmen for the ball, one of whom is naturally voiced by James Corden. Special effects are not this movie’s strong suit, but they don’t need to be. Cannon is happy to leave that sort of thing to Disney. Maybe the movie doesn’t pop visually as much as it could, but it makes up for that in energy and choreography. 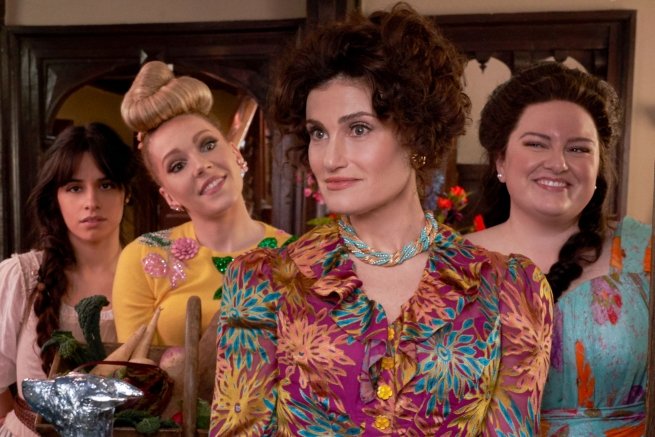 As much as Cinderella is right on representation and on modern depictions of female agency, Cannon knows that the lifeblood of any good jukebox musical is its songs. They don’t disappoint. The choices themselves are good, if not always unexpected. When Menzel and the stepsisters put their own nakedly capitalistic tendencies to song, Madonna’s “Material Girl” is not what you would call a revelation, especially as this song has already been used in this function in other films. Fortunately, that doesn’t make it any less enjoyable.

The real value of the songs come in their use as half of a medley with another song, which when done well raises the value of each individual song exponentially. The film opens with the aforementioned “Rhythm Nation” to comment on the workaday lives of the villagers, but combines with Ella’s own introduction song, Des’ree’s “You Gotta Be.” Just when you thought “Rhythm Nation” had petered out, it layers back in upon “You Gotta Be” in thrilling fashion. Similar triumphs are mashups of “Whatta Man” and “Seven Nation Army,” and “Million to One” and “Could Have Been Me.” 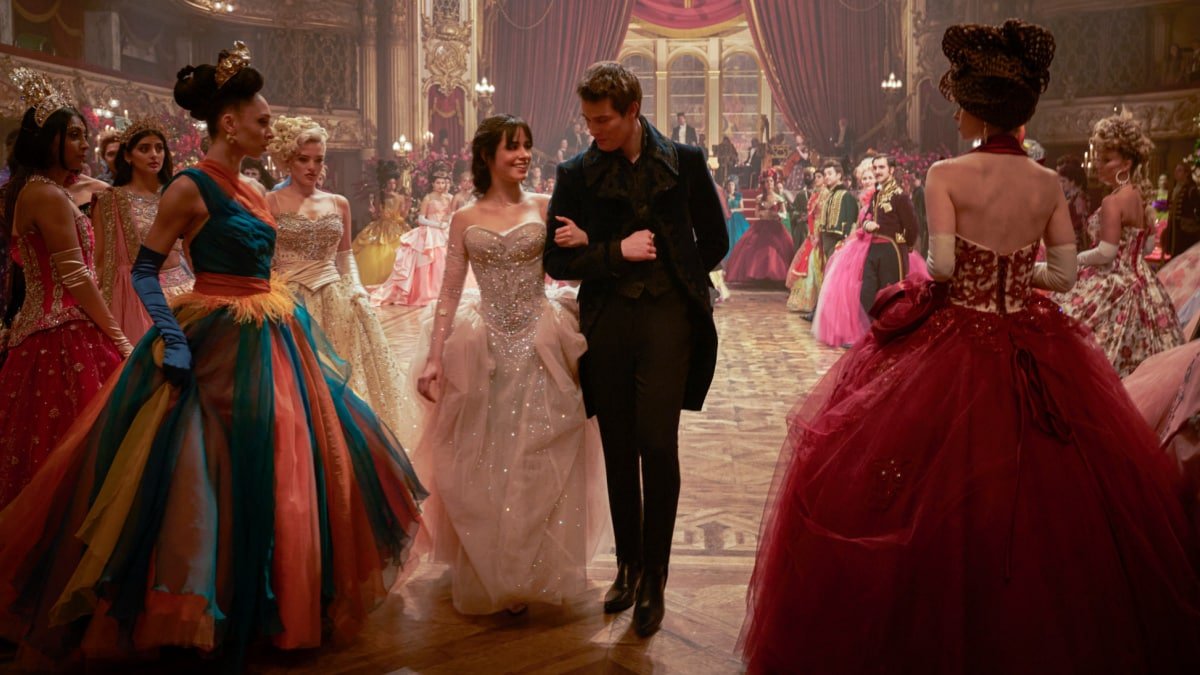 Cinderella might have shot from good to great if it had been a bit more definitive in its breaks from the source material. There’s a “pleasing all sides” quality to the film that leaves it short of true importance. Given the control of her own destiny that’s been afforded to Ella, it can be a little disappointing the way she succumbs to the needs of a traditional romantic storyline when Cinderella wants to hedge its bets. It doesn’t significantly damage the film’s overall quality, but it does leave us wondering if a yet-more-progressive version of the story awaits in another six to ten years.

Cinderella is available for streaming on Amazon Prime.