"It’s a neat trick that the Jumanji franchise has now given us two distinct conceits that both feel like original ideas. "

"Jumanji: Welcome to the Jungle more than reaches its own goals as popcorn summer entertainment, and has plenty of intrinsic worth."

As obvious as it was to remake Jumanji – or sequelise it, or reboot it, or whatever – the way they chose to remake it was not obvious. The obvious way would have been as a straight remake, to say “We can make so much better digital jungle animals nowadays!” However, audiences have increasingly rejected unconvincing CG, which is all CG if it’s not infused with a certain narrative inspiration. So the makers of Jumanji: Welcome to the Jungle largely ditched the animals, inverted the essential setup, updated the nostalgic reference point, and came up with something genuinely fresh.

Instead of the game coming out of the game, as it were, and as it was in both Chris Van Allsburg’s original 1981 storybook and the 1995 film version of it, here we get characters going into the game, and getting played by well-known celebrities. That shouldn’t imply that this is just a star vehicle for Dwayne Johnson, Jack Black, Kevin Hart and Karen Gillan. Rather, it gives them each a chance to play against type, and do it in a pretty funny way. 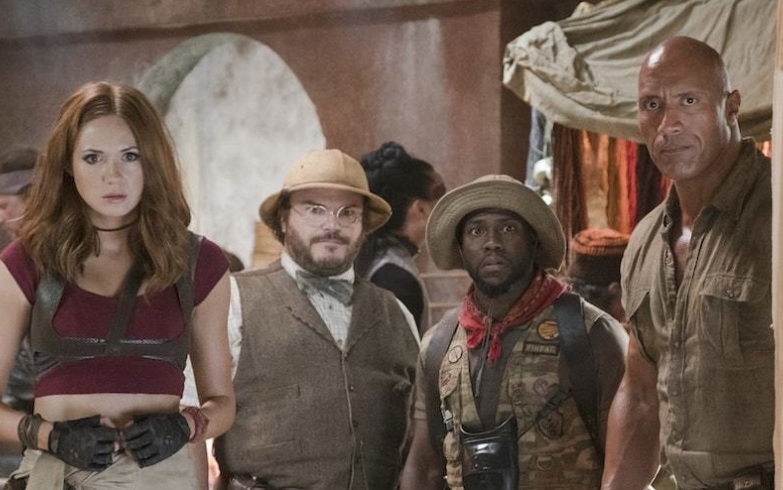 Not only are these adults playing teenagers who unearthed a Jumanji video game while in detention at their school, but the avatars those teenagers have gotten matched up with do not fit their personalities. Hulking Johnson is the shy nerd, Spencer. Gillan in sexy jungle attire is the shy nerd, Martha. Both are badasses in the game. Hart is a shrunken down version of the massive high school football player, known by his nickname, Fridge. And Black gets the dream assignment for his comedic sensibilities by acting out the shallow, selfie-obsessed beauty, Bethany. Because it’s a video game, they have awesome character names: Dr. Smolder Bravestone, Ruby Roundhouse, Franklin “Mouse” Finbar and Professor Sheldon Oberon.

A Jonas brother (Nick, if you’re counting) gets thrown into the equation as this film’s Alan Parrish stand-in. He’s the fifth character, Jefferson “Seaplane” McDonough, a high school kid like them who has been trying to return home – for 20 years. The fact that the game limits you to just three lives, as you try to navigate the jungle’s many dangers and save its titular city, has made the missing teenager Alex shy about doing anything too dangerous. And it’s a quick learning curve for the others, who lose lives even before they realise how precious they are, or even what’s going on.


It’s a neat trick that the Jumanji franchise has now given us two distinct conceits that both feel like original ideas. You’d think there should already be plenty of movies where characters get sucked into video games, and sure, you do have things like the Tron movies. But Jumanji: Welcome to the Jungle does indeed feel like a welcome to something sort of new. We discover the characters’ world as they discover it, including such details as the character stat sheet that gets projected out in front of you if you tap a certain spot on the left side of your chest. This is how we discover that Mouse Finbar’s strengths include “weapons valet” and his weaknesses involve, ominously, “cake.”


How that one plays out is just one of this film’s many laughs. Welcome to the Jungle obviously boasts a wealth of comedic talent, as Hart and Black are primarily comic actors while Johnson has tried his hand at comedy more often than a star of his stature might. So Gillan may be the unexpected find here, though she’s not a complete stranger to comedy either. Her attempts at trying to use her feminine wiles, when she’s actually a gawky intellectual, are great examples of physical comedy. She also blushes and geeks out in ways that demonstrate how much Gillan is inhabiting her real-world alter ego. 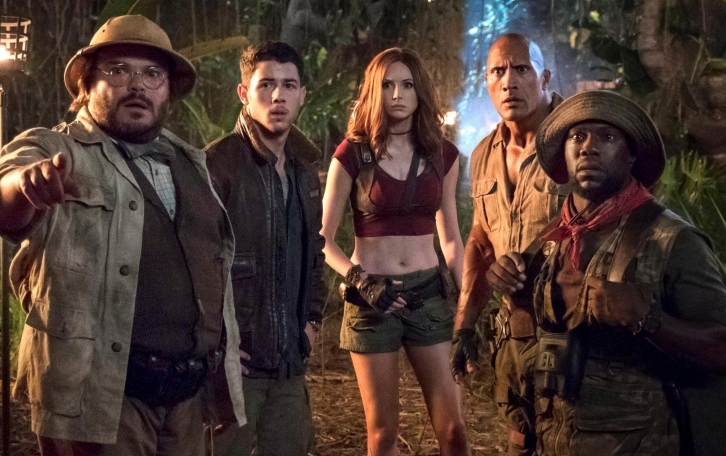 The wealth of comedic talent does not result in everyone trying to steal scenes from each other, either. Just as these characters must work as a team, utilising their various strengths to solve riddles and evade psychotic henchmen on motorcycles, the actors work as a comedic team, using their own strengths in concert with one another. Even if he hasn’t really been gone, this feels like a comeback for Black, who delights in getting in touch with his teenage girl side. Hart makes a couple comedies a year, but rarely does the writing support him as it does here, and he makes the most of it. Even Johnson finds that perfect way to set his beefy frame in opposition to the mind of a spindly, scared teenager just trying not to cry. 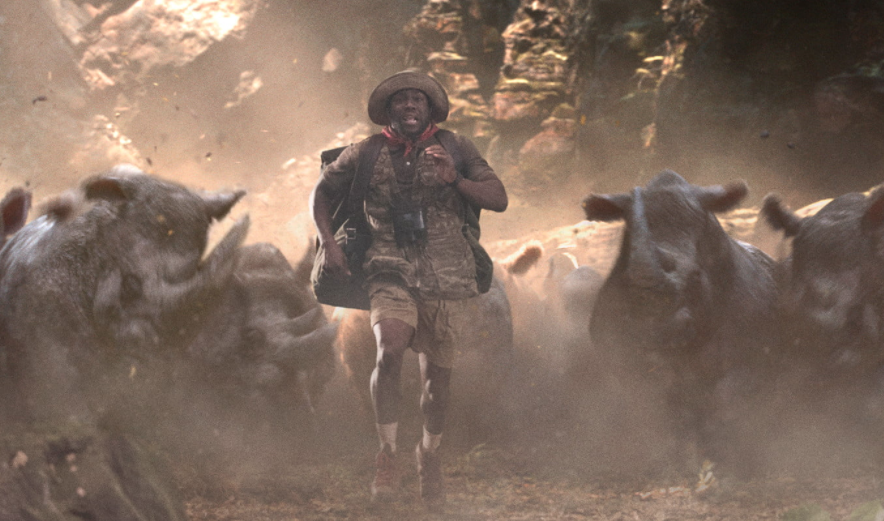 There are indeed a few scenes involving animals. A set piece where a stampede of albino rhinos tries to run down a helicopter that can’t ascend is particularly memorable. But it’s clear here that director Jake Kasdan and his team of screenwriters viewed the animals as something of a crutch in the original Jumanji, a “what will they show us next” parlour trick more than a core story element. This film has smartly concentrated on the character dynamics and given us something that feels more like Indiana Jones lite than safari. It works.

Not everything the characters have to do, nor the progression of tasks that must be completed, are entirely satisfying, but maybe that’s as it should be. These obstacles are before them in order to reach a collective goal, not for their own intrinsic worth. Jumanji: Welcome to the Jungle more than reaches its own goals as popcorn summer entertainment, and has plenty of intrinsic worth.