"The Tomorrow War has a curious relationship to the time travel genre in that it’s very interested in solving potential conundrums, but not that interested in doing anything else clever with the genre’s standard components."

"A number of things about the movie do work, among them the great special effects of the white spikes."

What do Starship Troopers, Edge of Tomorrow and the new Amazon film The Tomorrow War have in common? All three are high-concept science fiction movies in which ordinary citizens are sent in to face unimaginably lethal and multi-legged aliens, who are far more likely to leave them as bloody stains on the grass than get taken down by bullets, which require a fusillade to have any hope of succeeding in the first place. The latter two also have the word “Tomorrow” in the title, which is either just a coincidence – though more likely an intentional choice to invoke the former with the latter – or a recognition of the fact that they both deal with time travel, in a manner of speaking. 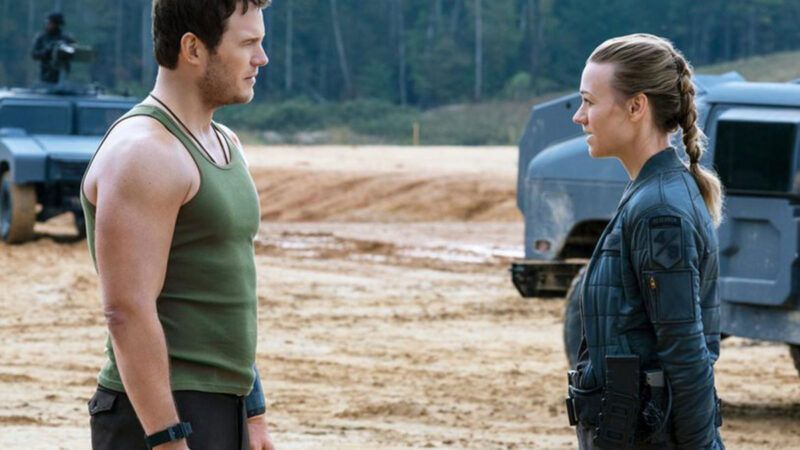 While Edge of Tomorrow’s time travel is extremely localised and repeats in the familiar Groundhog Day mould, The Tomorrow War comes at it in a way that’s reasonably original within the well-trodden time travel space. The year is 2022, and a strange phenomenon notifies the citizens of Earth that the year is also 2050. It seems these two time periods are moving forward in tandem, as in, it’s possible to travel back and forth between them, but only between the exact two moments in time the different time periods find themselves “currently” in. It’s only the first of a number of concepts that don’t get satisfactorily explained, which shouldn’t matter if you’re really loving the movie, but kind of do here.

What’s prompting these soldiers of the future to come back in time to 2022 – they arrive from a purple singularity just above a football pitch during an internationally televised game – is that the human race is facing extinction in 2050. The earth has been infested by some truly gnarly arachnid-like aliens, who we don’t see until a bit later on, and who are nicknamed “white spikes” because they shoot bone-like spears from their appendages, in addition to all the other havoc they can wreak. In two years since their invasion started, they’ve reduced the worldwide population to less than 500,000, so the citizens have been forced to call in reinforcements from the past.

In order to assemble an able-bodied army capable of staving off extinction, current citizens of the world in 2022 – whether they are logical candidates for military service or not – are drafted for week-long tours of duty fighting the white spikes in 2050. If a week seems like too brief of a tour, that gives some indication just how unlikely it is to survive and return home to your loved ones. Family man Dan Forester (Chris Pratt) is one of the better candidates, having served in the military, but when he’s dropped into this future mayhem, even he doubts there is much hope for humanity. (Betty Gilpin, Yvonne Strahovski and Sam Richardson also star.)

The Tomorrow War has a curious relationship to the time travel genre in that it’s very interested in solving potential conundrums, but not that interested in doing anything else clever with the genre’s standard components. For example, the people who are sent back to recruit the past army are quite young, while the recruits going forward are on the older side. This is because two versions of each person cannot exist at the same time; the future time travelers have not yet been born in 2022, and the ones they recruit are already dead by 2050, which they know because they have the death certificates to prove it. It’s clever and it introduces a real “oh shit” quality to the movie – the recruits discover that even if they don’t die during their week-long deployment, they’ll be dead of some other cause within the next 28 years, and possibly a lot sooner than that. Once it sets up these basic rules and establishes the two time periods, though, Chris McKay’s film settles for becoming far less ambitious. Instead of really diving into the possible interplay between the two timelines, McKay and screenwriter Zach Dean focus on the more pedestrian goal of depicting a bunch of really horrifying battle scenes. Now, that’s not to say these scene are not great, as they involve some of the deliciously gruesome violence we saw in Starship Troopers in particular (there’s one human who gets crunched in half, anyway). They also firmly establish the stakes of what it means to go up against such a dominant enemy – especially if the urgency of the moment prevents you from getting trained up. They just don’t take things a step further to try to blow our minds, as the best time travel movies can do.

The tone is also a bit off. This is a truly bleak notion of where the planet hypothetically finds itself 30 years from now, with neither time period able to indulge in anything close to the luxury of hope. Yet Dean believes that this type of movie also has to be quippy, so there are a lot of discordant moments where characters banter about insignificant things. That might work if this were the nervous chatter of a person facing a likely death sentence at the hands of an alien blur of legs and teeth that wants to shoot them full of spikes and eat them, but it’s more the chatter we might see in Pratt’s more regular environs, the Marvel Cinematic Universe. It doesn’t really work in this context to give us characters who seem to know they’re in a movie. 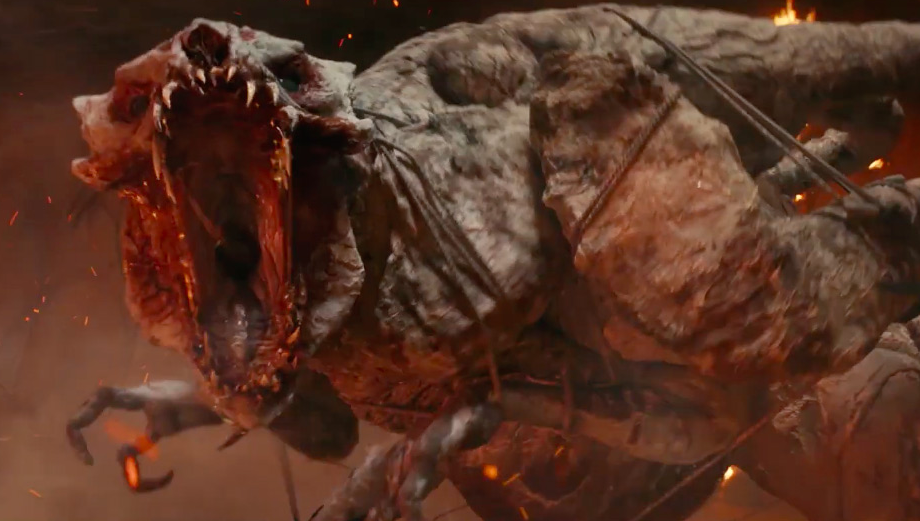 A number of things about the movie do work, among them the great special effects of the white spikes. The opening comparisons to Starship Troopers and Edge of Tomorrow are actually huge compliments, as those films are some of the most successful sci-fi visions of their eras and truly convey to us the intensity and terror of being in battle against an impossible enemy. It doesn’t get more impossible than the white spikes, who basically have to be nuked if you want to be sure they won’t make one last dying lunge that will tear your head off.

They really look the part, and as a little added bonus, they also serve as something of a metaphor for environmental collapse, as 2050 is also a date thrown out by climate scientists when looking ahead to the ecological disaster that awaits us. It’s not too far of a stretch to say that our hypothetical grandchildren need to “recruit” us to make environmental change today to save their lives tomorrow. This message may not be The Tomorrow War’s intention – it’s really more of a shoot-em-up – but if it is, hopefully it’ll play some small role in encouraging us to fight that particular tomorrow war today.

The Tomorrow War is currently streaming on Amazon Prime.