Shockingly violent and darkly (yet exuberantly) comical, a scathingly satirical look at the 1980’s yuppie culture of hollow excess, and a psychological insight into just how charming murderous insanity can be, Guinevere Turner and Mary Harron’s American Psycho was a stomach-churning pitch black comedy that was both and hilariously bloody and bloody hilarious. Boasting a star studded cast led by a pre-Nolan Christian Bale (The Dark Knight Trilogy, The Prestige), and featuring Reese Witherspoon, Jared Leto, Willem Defoe, and Chloe Sevigny, this deliciously dark debacle of murders and acquisitions sees successful businessman Patrick Bateman very unsuccessfully attempting to bury his overwhelming urges to murder and maim, under a giant heap of exclusive restaurant reservations and distinguished business cards.

American Psycho was introduced to the world in 2000, and was based on its earlier incarnation, the 1991 book of the  same name by Bret Easton Ellis, who’s recent film writing credits include The Canyons (Starring porn star prima donna James Deen and Lindsay Lohan. This film is terrible, no should watch it, ever). Making its debut at the reputed Sundance Film Festival, the critical reaction to American Psycho was polarized at best and underwhelming at worst. Certain big-wig critics such as Roger Ebert and Peter Travers greeted the film favourably, but the sum total of its reception would ultimately be described as lukewarm. In coming years American Psycho would reach cult status, and in retrospect would be viewed quite simply as a film that was above average. Harron’s film was chronically underrated, suffering from clouded judgement created by controversy and high expectation that stalked American Psycho from its inception. The uproar from the self-touted moral conscience of America that emerged in the face of Ellis’ novel followed Turner and Harron’s adaptation, with accusations containing popular buzzwords such as violent, homophobic and misogynistic (even though Turner and Harron are both women, the former being openly gay). To be fair to the Christians and sign-wavers however, Ellis’ novel was indeed shockingly violent, with entire chapters being devoted to painfully detailed accounts of rape, murder, cannibalism and necrophilia. It was indeed over-kill. Harron rose to the challenge quite magnificently however, choosing to simply allude to subject matter that was too disturbing or lurid to be visually depicted, therefore ensuring the film was not excessively violent, while at the same time acknowledging the elements that were integral to retaining its essence.

No serious film critic or film goer would condemn a film for the juvenile reason that it was too violent, but the violence in American Psycho was still the subject of its main criticisms. Many critics felt that it was banal; that it was empty and hollow, pointless and indulgent. I’ve never been one to shy away from the fact that violence in film can be entertaining and exciting in of itself (and how) but the hallmark of a truly good film is how it uses violence as a plot device. It should ideally serve to convey an idea(s) about something, either inside or outside the world of the film, and American Psycho is no slasher-esque shlockfest in that regard. The emptiness and hollowness of Bateman’s violence doesn’t signal that it is bereft of any point, but that is in fact the point in itself. Harron (and Ellis) warn us of the psychotic and inhumane impact of worshipping the empty shrines of over-indulgence and conformity. It is not the violence but Bateman that is empty and hollow, his constant need to over-indulge to satisfy his base desires turns him into a beast, and his will to conform robs him of his individuality and ultimately his human-ness, which makes him both inhuman and inhumane. 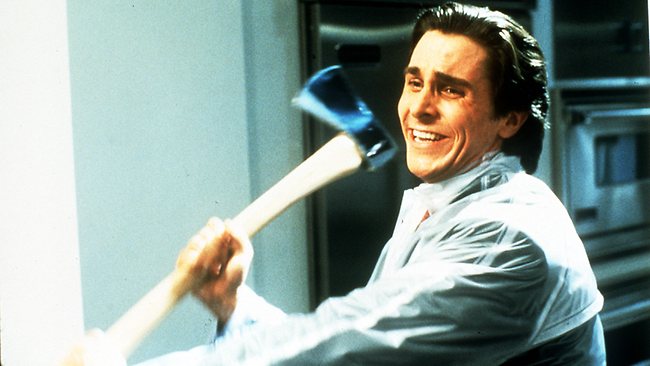 Harron deliberates on this idea from the beginning of the film, skilfully manipulating us into mistaking ominous red drops of raspberry consommé to be blood. She further explores this idea in the infamous business card scene in which Bateman is driven to the urge of a nervous breakdown when presented with the immaculate business card, its beauty making him tremble.

There are several cinematic gems in this film, such as the masterfully crafted scene that accompanies the opening monologue, in which Bateman details his daily Anthony Robbins style health and fitness morning routine which enables him to walk out into the world and make a killing in his life of mergers and executions. The best scene in this film however is the one that features Bateman, his pompous rival Paul Allen (Jared Leto), Huey Lewis and The News, and a pick axe. Here Bateman slips into a Jim Carrey-esque persona of animated insanity, enthusiastically espousing his critical reading of the 1980s jingle by Huey Lewis and The News, ‘It’s Hip To Be Square”. Bateman jives and prances around his sleek Manhattan apartment to the catchy tune, as he educates an inebriated and uninterested Allen on Lewis’ glorious message on the importance of trends and pleasures of conformity, but only before creating a bloody finish to the symphony with a pick axe and Allen’s face.

The crowning bloody red jewel of American Psycho however is undoubtedly the stellar performance of Christian Bale as the despicably hollow and violently empty Patrick Bateman, a role he played almost a decade before his now popular portrayal of the more wealthy and slightly less crazy Bruce Wayne. Here he shows more than a glimpse of the acting chops that he would become famous for, as we would later see in The Prestige and The Machinist.

So, if you haven’t had the opportunity to see or want to revisit this underrated classic, jump on your favourite torrenting client and start downloading!