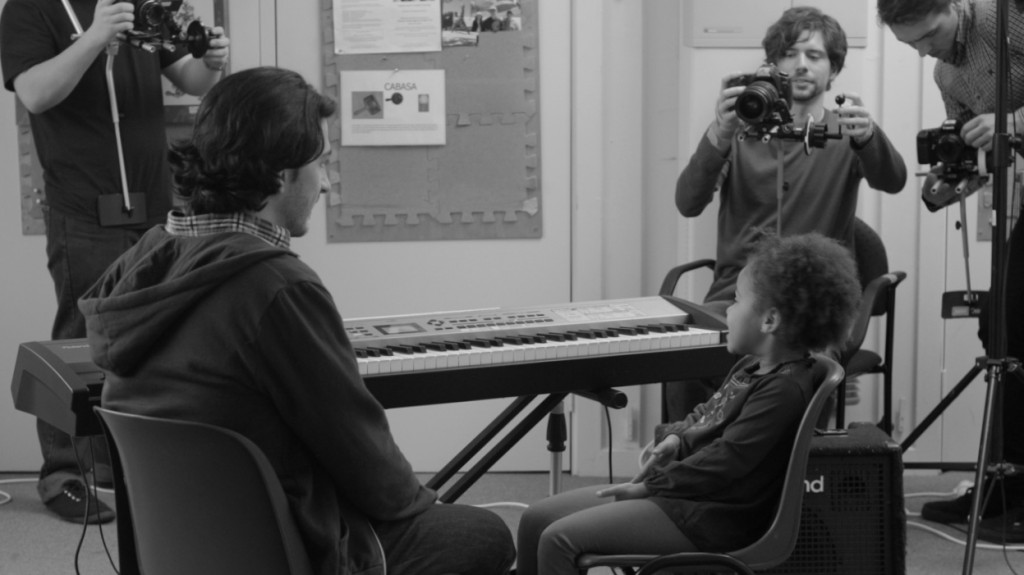 Local filmmaker Chris Pahlow has been working on his first feature, Play It Safe, for over four years now. It’s now in it’s final stages, and you can help support Pahlow and his crew by heading to the film’s Indie GoGo page. We got the opportunity to talk to Chris about his experiences as an independent filmmaker and the incredible feat of having a film production span years.

Becoming a filmmaker was a pretty gradual process for me, and I don’t think I ever really consciously decided to make it my career. I was never the kid with a Super 8 camera, or even a camcorder, making little movies in my backyard or anything like that. But I was always really into writing and storytelling, and as I went through high school I started to experiment with how I could use different mediums like music, photography, and design for storytelling. I ended up doing a broad degree in Creative Arts, which had a bit of everything: photography, philosophy, writing, painting, theatre, and of course film. This is where it really started to click for me. Film was like the perfect combination of everything I was interested in. I joined a little film collective called D.I.Y Art with my good friends Steph Brotchie & Maia Tarrell, and we were lucky enough to get some festival success with Fraught, which was the first short we did together back in 2006. After that I never looked back, and I’ve been focused on making films ever since.

I really admire directors like Ang Lee, Richard Linklater, and Michael Winterbottom, whose work is not only consistently great but also incredibly diverse. I’d love to have a career like that, where each project is something completely different and challenging. Guys like Michel Gondry and Mark Romanek have also been incredibly influential on my approach to filmmaking. I learned so much from watching their videos, and hearing Mark Romanek talk about the way he imposes rules and restrictions on each video he makes has been a massive influence on all of my work. I’ve also got a lot of love for (in no particular order) Andrew Bujalski, Mike Leigh, John Carpenter, Don Hertzfeldt, Hayao Miyazaki, Edgar Wright, Tony Ayres, Hirokazu Koreeda, John Cassavetes, Keith Schofield, Hexstatic, and the early Pixar films.

For me, the development process is definitely the most exciting. There’s nothing I like more than coming up with a fun idea for a music video, and then pushing it further and further until you have a really great cohesive concept. I love it so much, I’m kind of addicted to it. The tough part is then actually getting the project off the ground! Developing Play It Safe was very much the same. Working on the script with my co‐writer was lots of fun, and then getting to workshop and rehearse with the actors was a dream. For me, that’s what it’s all about. It’s such a creatively free experience, where you can just play and see where ideas take you. And the best part is that it doesn’t cost anything, unlike the rest of the filmmaking process which costs heaps!

Money is the obvious one. It doesn’t seem to matter what kind of film project you’re working on, making the finances work is always a challenge, and it’s especially true for a really grassroots feature like Play It Safe. But even more than that, I would probably say the length of time it’s taken to get the film made. It can be hard enough putting together a short in a few weeks or months, but keeping a project going for four years was not something I was really prepared for. In terms of the production itself, keeping the team passionate and engaged for that length of time was extremely challenging. Everyone involved in the film has been working for free because they loved the story. They still have lives to live and all sorts of responsibilities outside the film, so it was a big ask for them to put their faith in me and the film for that length of time. I’m incredibly grateful to all of them. To give you a bit of an example of the level of commitment we had, the lead actor Nicholas Kato ended up keeping the same hairstyle for over two years to maintain continuity as we shot the film gradually. He’d take reference photos and get his hair cut by his mum (who luckily happened to be a master hairdresser) so it would match perfectly before every shoot. That’s when you know it’s a really D.I.Y production! I don’t know how many actors would have been prepared to put in that level of commitment, and I’m immensely grateful. In addition to just trying to keep the project alive, there’s also the toll it takes on your personal life. There have been many times where all I really wanted to do was to just turn off my phone and sleep for a week. But that’s not something you can do when you’re producing and directing a film on this scale. Once you’ve started there really is no chance for a rest or break until it’s finished, and it’s a tremendous challenge. Doing the film over this amount of time was really the only way we could do it without investors or government funding. It worked for us, and I couldn’t be happier with how everything has come together, but it’s not something I will do again in the same way. I’d like to do the next one a lot quicker. Getting it done in about a year is my goal, but we’ll see what happens. 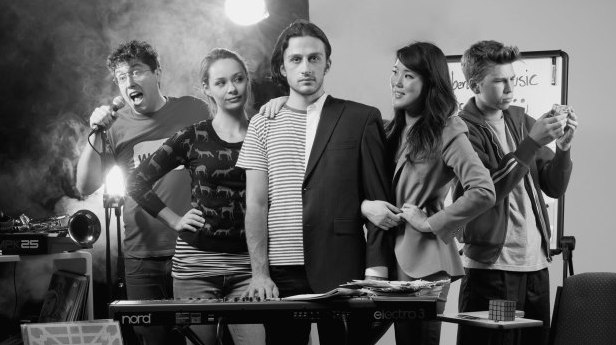 One thing that I think is not appreciated by enough filmmakers is really pushing ideas to their logical conclusion. So many shorts and music videos introduce an interesting concept or aesthetic, something that might intrigue you for twenty or thirty seconds, but then that’s it, they don’t take it any further. Guys who have really mastered their medium, like Michel Gondry, Joseph Kahn, or Keith Schofield, are not content to just establish an interesting idea and leave it at that. If you look at videos like Cibo Matto’s “Sugar Water”, Blink 182’s “Always”, and CSS’ “Move” you’ll get a feeling for what I mean. Whatever idea they’re exploring, these directors take it as far as it can possibly go, so that every moment of the work feels original and exciting.

You often hear people say that shorts are a great testing ground to see if a director knows how to tell a good story through film. That may be true to some extent, but, in my opinion, shorts and features are fundamentally different. What makes a good short film doesn’t necessarily make a good feature film, and vice versa. Some people may be good at both, but I don’t think being good at one is any guarantee that they’ll be successful at the other. I think if you really want to make features, then make features. Don’t just make shorts for ten years hoping that an opportunity will land in your lap. There are filmmakers out there in Australia making indie features who are younger than me. My friend (cinematographer/director) Tom Swinburne is in his twenties, and he’s shot four feature films and is currently in post on his first one as a director. That’s how you learn about making a good feature, by making features.

Social media is definitely becoming a more and more important part of filmmaking, and it’s something I wish I was better at. Throughout the process of making Play It Safe, I’ve tried my best to share what I’ve learned online, primarily through the film’s blog (http://www.playitsafemovie.com/news) but also through social media. Now that we’re on the home stretch I’m hoping to focus more on this. I’ve been lucky enough to connect with some really great filmmakers through Twitter, and there are a lot of really generous people out there who are sharing resources and knowledge, and making it easier for other people who want to create indie films. I’d like to give back to the community out there as much as I can. 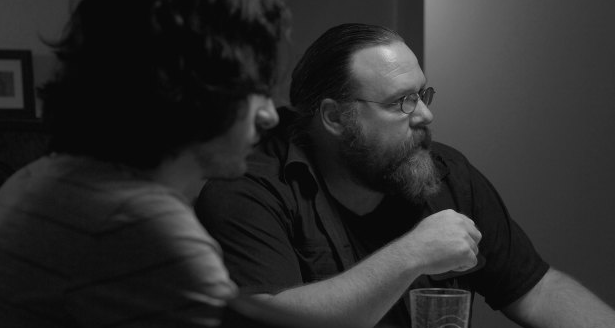 Once Play It Safe is released and I’ve had the chance to catch my breath, I’m very keen to get started on my next feature. I’ve got three scripts in various stages of development, all of which are very different from Play It Safe. One of them is an adaptation of a play I saw at the Melbourne Fringe Festival this year that absolutely blew me away. I can’t talk too much about it yet, but I’m working on it now with the writer of the original play and I’m extremely excited about how it’s coming together. The piece is very provocative and it’s a story that I think really needs to be told. I’d like to start moving forward on that one next year once things calm down a bit with Play It Safe. I’m also very keen to get back into doing some shorter work. Four years is a very long time to be working on one project when you’ve come up doing music videos and short films. I’m sure there will be a few music videos on the horizon, and I’d really like to try my hand at some fashion videos. The last video I did for Mantra had a bit of a fashion‐film vibe in some parts, and I really enjoyed just going nuts with the art department on that, so I’m looking forward to doing some more out there stuff like that.

Learn your craft, be open to different ideas and ways of doing things (not just what they teach you in film school), and work your butt off. Put yourself out there, meet interesting people, and make connections. As cynical as it sounds, making good work isn’t enough, you need to meet the right people. Unless you’re super lucky, opportunities will rarely come to you. You’ll need to make opportunities for yourself.