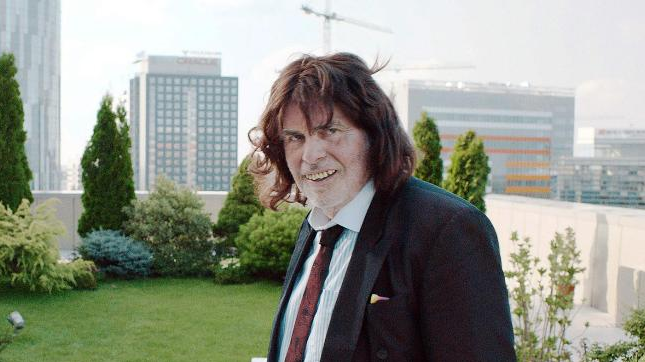 Toni Erdmann is a little story of a father who wants to spend more time with his workaholic daughter. So he dons false teeth, slaps on a wig, and proceeds to insinuate himself into her most important business engagements, pretending he’s an eccentric stranger. You know, that old chestnut. As Ines (Sandra Huller) is stationed in Bucharest for her consulting job, away from her German homeland, her father Winfried (Peter Simonischek) barely gets to see her, and when their paths do cross it’s brief and unfulfilling. Always a bit of a prankster and mourning the death of his dog, Winfried makes a surprise visit by waiting in the lobby of his daughter’s office for three hours, his pair of false teeth close at hand. At first he presents himself as her father, though he’s scruffy and doesn’t really fit into this world. After she thinks he’s returned to Germany, he assumes the personality of an alter-ego, Toni Erdmann, and keeps showing up in the most unexpected places, forcing his daughter to play along with the improvisation. It’s either that or reveal to the high-powered oil executives she works with that this is the type of father she has.

And how long does it take to tell this story? It takes two hours and 40 minutes.

You won’t care. Toni Erdmann, the third feature from director Maren Ade and a sensation at Cannes, explodes the notion that a comedy must be briskly paced, while also transcending the limited boundaries of that genre assignation. It’s not that it’s not a comedy; it’s one of the funniest comedies a person is likely to see in 2016. But comedy is only one of its goals. One particular scene, perhaps the most absurd nervous breakdown ever captured on film, might be the funniest extended sequence of the last five years. That tells you something about the delicate balancing act of this cinematic marvel, which finds humour in painful situations without cheapening that pain. Pain and laughs rub elbows constantly in this movie, without that feeling like an unwieldy tonal shift or overly sentimental.

Ade uses her lengthy running time to really delve into her characters’ lives in ways that would not initially seem necessary. For one, we get an in-depth look at the methods Ines uses to recommend an outsourcing strategy to the oil company. There is no real “reason” for this, but it’s totally engrossing. Some scenes are important, others seem to exist sort of as flavour. But what emerges is a portrait of a woman doing what she must to progress in her career, while imperfectly trying to find something like happiness. The relationship with her father is not dysfunctional in any defined way, it’s just strained in a manner that develops gradually over many years of neglect. The adventure this father and daughter go on together is as unpredictable as it is touching, and Huller and Simonischek bring it home in a powerful denouement. Tears of laughter, tears of emotion, it’s all bundled up in this distinct and unforgettable film.