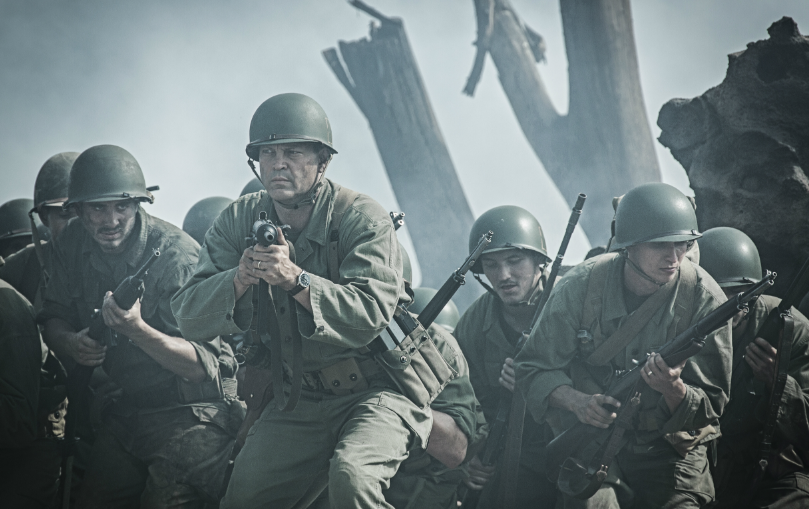 Mel Gibson’s Hacksaw Ridge is actually two movies and both are challenging to watch for very different reasons. The first movie is a melodrama, meandering cheerfully in pursuit of a sense of style somewhere along the lines of classicism when in reality it accomplishes something more like maudlinness. The second movie is a succession of battle scenes that are some of the most affecting battle scenes ever committed to film. The first film drastically eclipses the second in screen time. The second film drastically eclipses the first in quality.

Hacksaw Ridge launches in the heat of battle. One scene by which many scenes that depict twentieth century warfare are often compare to is the landing on Omaha Beach in Steven Spielberg’s 1998 film, Saving Private Ryan. That film worked fine as an action film but reprehensibly as a war film if Spielberg’s general idea was to convey the horror of war. In Saving Private Ryan, Steven Spielberg is more concerned with clever film tricks and maintaining a captive audience than lamenting the tragedy of conflict. A war film isn’t anti-war if the fighting is entertaining. Entertainment is appealing.

Gibson is a dysfunctional filmmaker but not one without considerable talent. His battle scenes in Hacksaw Ridge are wisely without ego. They don’t have the artistry that Spielberg smothered Saving Private Ryan with. That’s a good thing. War films often struggle with the dilemma of how to convey war authentically without sending audiences running from the aisles. The result is often paradoxically engaging battle scenes. Hacksaw Ridge doesn’t solve this problem, but it takes a step in the right direction. The fighting is compelling but it’s also disheartening and challenging. The consequence of war has rarely been so well expressed to audiences who have never experienced it first hand. One of the most affecting scenes in the film arrives after the first battle scene. The men spend the night reflecting on the friends that they have just lost. Somehow, each name resonates as a real person who has lived and has just died. 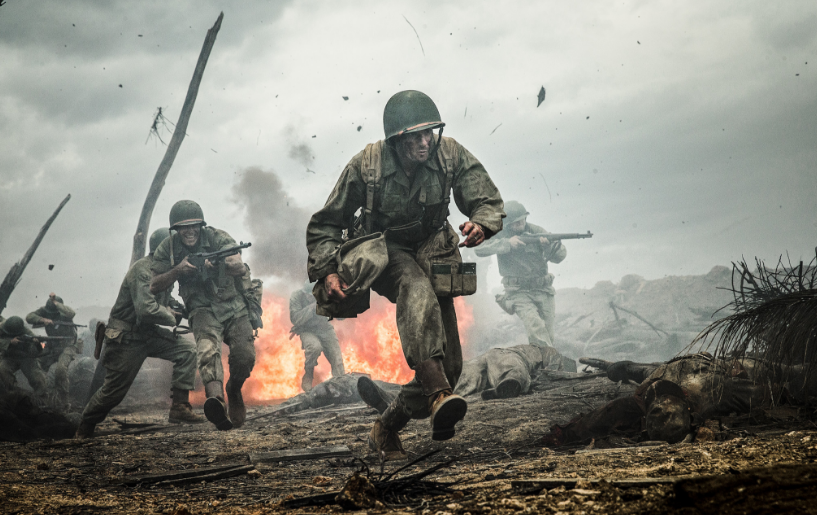 The story behind Hacksaw Ridge is true and it is remarkable. Desmond T. Doss (Andrew Garfield) enlists in the army. He is also a Seventh-day Adventist and a conscientious objector, refusing to pick up a rifle in boot camp let along fire one in battle. The first hour of the movie is dedicated to Doss’ recruitment and subsequent alienation from his platoon, with some attention given to a mawkish romance with local nurse Dorothy Schutte (Teresa Palmer). They all have Southern accents, although the America of Hacksaw Ridge looks an awful lot like Australia. Similarly, once Doss flies off to war, he’s fighting in the area of Japan that you’re most likely to spot a kangaroo.

To reveal the deeds of Desmond T. Doss, which are true, would be to diminish the impact of Gibson’s film. That’s been a problematic one for the marketing team on this film, considering those deeds are the selling point of Hacksaw Ridge but also the apex of the narrative. Suffice to say here that Doss’ accomplishments are naturally heartrending. Gibson has an appropriate admiration for the man who can find an astonishing sense of compassion within himself on a battlefield.

There’s something old fashion about Gibson’s approach to Doss’ story. Given that, as a filmmaker, Gibson is about as subtle as a sledgehammer, a classic approach might have been appropriate, but there a degree of adaptation is advantageous when dealing with antiquated filmmaking methods. For instance, you couldn’t re-remake The Maltese Falcon shot for shot, word for word in 2016, with Channing Tatum in Humphrey Bogart’s role. The mood of the piece would be archaic. The best thing about Hacksaw Ridge is the truth. The best thing about Hacksaw Ridge as a film is the force in which Mel Gibson has constructed his battle scenes. The rest of it make up the worst things about Hacksaw Ridge, and there are quite a few of them.