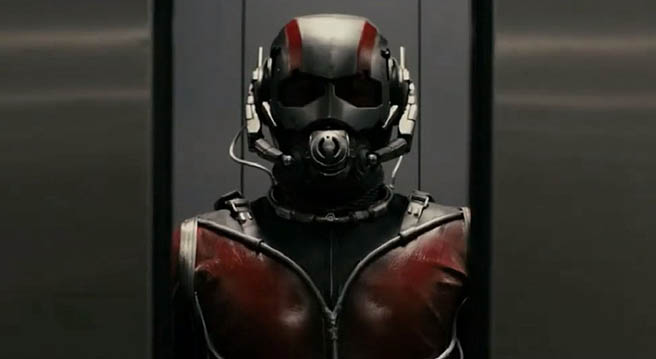 After releasing an ant-size teaser for this trailer a couple of days ago, Marvel has finally launched a visually appropriate version of the full Ant-Man teaser. He’s not an ant, man, he’s an Ant-Man. For those who think the idea of Ant-Man is kind of silly, you could be right, but then again Guardians of the Galaxy seemed like a huge risk for Marvel and it was a phenomenal success for the studio. Paul Rudd is usually reasonably amiable, we’re huge fans of Michael Peña and Evangeline Lilly was one of the better parts of The Hobbit, despite her character being entirely and unnecessarily fabricated. We’re a bit suss on director Peyton Reed, who’s responsible for The Break-Up and Yes Man, but we’re also certainly willing to give someone with such a killer name a chance. Good luck, Peyton!

” Thief Scott Lang must aid his mentor Dr. Hank Pym in safeguarding the mystery of the Ant-Man technology – which allows its user to decrease in size but increase in strength – from various new threats, and plot a heist that will save the Earth.”