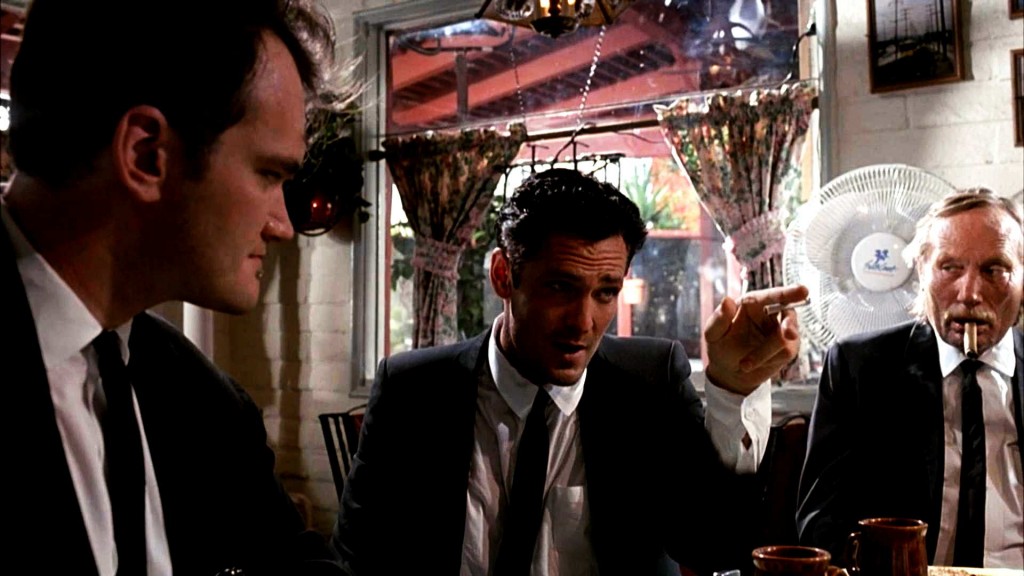 There are so many idiosyncratic elements that comprise a Tarantino film, and you could pick anything like music, costume, or feet, and analyse it. However, for this list, we shall discuss some of the most important scenes in some of his most celebrated films which include food. In addition to cereal and rice in ‘Kill Bill: Vol. 1’ and ‘Vol. 2’ respectively, here are some of the other standout scenes that feature culinary delights.

Regardless of your thoughts about the meaning behind Madonna’s ‘Like a Virgin’, Tarantino gives us the opportunity to consider all opinions on the matter in the film’s opening scene. Sitting at a round table in a diner having breakfast are several suit-clad men, some dressed casually, but all of which play an integral role in the film’s big jewelry heist (which we never see). Opening scenes present an excellent opportunity to introduce audiences to the characters in the film, which Tarantino does, but he simultaneously introduces audiences to his style of filmmaking, and the integral role food plays in his oeuvre. In addition to learning about Tarantino’s style, we are able to ascertain small personality traits of the men around the table; most notably Mr. Pink’s (Steve Buscemi) aversion to tipping, and the reactions of the other characters speaks volumes about the dynamics of the group. In a film that is so character-centered, almost like a play, the importance of establishing their relationship is vital. As is determining how many coffee refills warrants a tip.

We are introduced to Vincent (John Travolta) and Jules (Samuel L Jackson) as they make their way to an apartment building to take care of business for their boss Marcellus Wallace. After lamenting over the fact that you cannot order a beer when at the cinema, which Vincent had done on his overseas travels, they arrive at their destination. On their way up to the apartment, Vincent mentions that their boss has asked him to take his wife Mia (Uma Thurman) out for dinner. After yet another discussion about food – this time it’s a Big Kahuna burger – and after a few fired bullets, we arrive at the dinner of Vincent and Mia. Jack Rabbit Slim’s is where they would dine, and in a stationary vintage car is where they would sit. Buddy Holly, their waiter, takes their order and they proceed to get to know one another. This scene is punctuated with the arrival of their food; first their drinks, then they chat. Mia powders her nose, and their meals arrive. Tarantino manages to tie the whole scene together by combining an activity that is so mundane, with a conversation that is the exact opposite – talking about throwing a man off a balcony while eating a burger is hardly a common dinner conversation! This scene is most well-known for the dance that follows, however their dinner proves to be just as tantalizing. The film’s final scene also involves food, taking place at a diner.

Aside from being one of the most iconic characters in contemporary film, Hans Landa (Christoph Waltz) is equal parts ruthless and gluttonous. We are first introduced to Hans as he visits a French farmer and his daughters, suspecting him of sheltering a Jewish family during the occupation of France in WWII. After downing two glasses of milk, Hans instructs his soldiers to fire their guns through the floorboards, and into the Dreyfus family, who are hiding below. Shoshanna (Melanie Laurent) escapes, and he witnesses her doing so; which brings us to their next meeting. Hans orders Shoshanna a glass of milk to accompany her strudel as they sit in an elegant restaurant, and makes her wait when he neglects to order the cream. This scene is wrought with tension and suspicion; Hans knows Shoshanna’s true identity, and she knows that he knows. What is so masterful about this scene is the way in which Tarantino combines something as arbitrary as enjoying strudel, with the overwhelming threat Hans presents for Shoshanna. It is fascinating to watch (and hear) Hans devour his strudel, too.

Calvin Candie and the dinner party in Django Unchained(2012)

Under the guise of purchasing one of Calvin Candie’s (Leonardo DiCaprio) finest Mandingo fighters, Dr. Schultz (Christoph Waltz) and Django (Jamie Foxx) find themselves at Calvin’s plantation, Candieland. Their true intention is to steal Django’s wife Broomhilda (Kerry Washington) away from her life of slavery, and when Calvin eventually learns of their intentions, he is none too pleased. This scene is famous for its well-publicized piece of trivia that DiCaprio, after shattering a glass with his hand, continued with the scene although his hand began to bleed profusely. It appears that there is a pattern emerging with Tarantino, which in many ways suggests that some of the most fundamental scenes in his films almost always take place around food. And while this scene is just one example, it is possibly the most restrained, and yet the most unpredictable scene out of this list. Whether it’s a greasy fast-food burger, or a formal dinner cooked under horrible circumstances, as seen in this film, Tarantino’s relationship with food is undisputedly evocative.