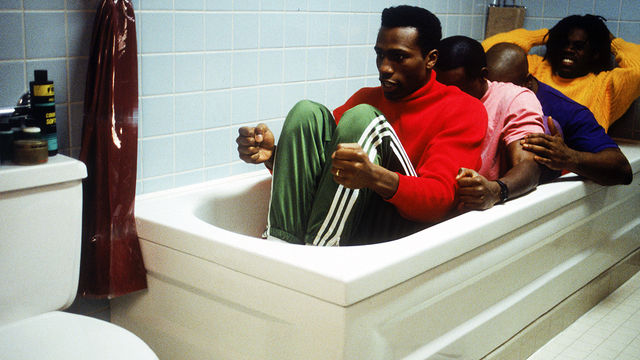 It’s risky to make movies about making movies, but that’s what director John Lee Hancock does with Saving Mr. Banks, revealing the untold story behind the development of the Disney film Mary Poppins. Specifically, it focuses on P.L. Travers (Emma Thompson) – the woman who wrote the stories on which Mary Poppins was based – and Walt Disney (Tom Hanks), who attempts to acquire the screen rights to these stories. Travers’ story is very engrossing to most Disney fans, as nobody really knew about her before this film’s release. One would expect the creator of Mary Poppins to be a happy-go-lucky, fun-loving woman, but this movie reveals that Travers was in fact very serious and demanding. We learn that she had an unfortunate childhood and that her father struggled with alcoholism – and in fact, her upbringing is what inspired her stories in the first place. It comes as a shock, when watching this film for the first time, to learn that such a positive and child-friendly story such as Mary Poppins could come from such a dark place. One wonders if the creators of Saving Mr. Banks have created an unrealistic representation of P.L. Travers as such an austere, stern woman – I mean, there’s no way someone could really behave like that, right? Wrong. Hancock affirms the credibility of his story with an audio clip in the credits of the real Travers talking, showing us that her film depiction was, in fact, extremely accurate.

Ben Affleck’s Academy Award-winning film tells the story of how CIA agent Tony Mendez exfiltrated six Americans from Iran during the 1980s Iran hostage crisis. But the six escapees cannot leave Iran safely without a cover story. In the case of Argo, their cover story is the following: Mendez is a film producer, and the six others are part of the crew for their latest movie. Why are they in Iran? Because they’re “location scouting”, of course. The group is provided with passports and made to learn everything they can about their new identities in case they get questioned by Iranian militia. Under Affleck’s direction, the story of Argo is filled with excitement and suspense, telling the astounding story of how the CIA made up a fake movie to hide their exfiltration agenda. The idea sounds almost comical, but it really happened! It was 18 years before the public found out about the whole thing, which makes you wonder – what other upcoming film projects these days are actually secret government cover-ups?

Angelina Jolie plays single mother Christine Collins in this haunting drama, based on a bizarre and heartbreaking true story. In 1928, Collins’ 9-year-old son, Walter, goes missing. Months later a boy is returned to her – not her son, but a boy. A random boy. A runaway. The L.A.P. dismiss her objections, afraid that acknowledging the mistake will make their department appear incompetent. But, of course, Collins can’t simply accept this stranger who is pretending to be her own child, so she continues to press the matter. This is where it gets really bad – newspapers start calling her an unfit mother, and the authorities themselves use gaslighting tactics to convince her that “Walter” is her son. They go so far as to deem her delusional and admit her to a psychiatric hospital, refusing her release until she says that this stranger is her child. The cruel and shocking tactics of the police in this film are made all the more horrifying with the knowledge that the events of the Christine Collins case really occurred.

Somehow, this film manages to remain exciting every single time you watch it. Described as “the true story of a real fake”, Catch Me If You Can is the biopic of Frank Abagnale Jr. (Leonardo DiCaprio), a con man who successfully posed as an airline pilot, a Georgia doctor, and a Louisiana parish prosecutor, all before his 19th birthday. Abagnale also became highly skilled and experienced in check fraud, something which had the FBI hot on his trail – although he was always one step ahead of them. The story is incredible, but perhaps the most endearing thing about this film is the insight it provides into Abagnale’s life. He was intelligent, cunning, and good at telling lies, but the film makes one thing clear – he was still just a kid. He was a scared and troubled teenager, not a dangerous criminal mastermind. The viewer wants him to get away with everything, because they know he doesn’t deserve to go to prison. And so, for this reason, Frank Abagnale Jr.’s cons don’t feel like crimes – they feel like achievements.

You have never truly had your mind blown until you’ve seen Bart Layton’s The Imposter. It’s a documentary that recounts the story of a 23-year-old French man who successfully conned a family in Texas into thinking he was Nicholas Barclay, their 15-year-old missing son. This information alone makes the story hard to believe. You can’t help but ask: “How could they not notice that he clearly wasn’t Nicholas?” It’s a frustrating question, and one that stays on your mind throughout the film. “Surely not,” you think. “There’s no way someone could have really gotten away with this.” And yet, it happened. Layton doesn’t hesitate to remind us all of how real this story is, interspersing real footage of the events in between his interviews with the imposter and the Barclay family, as well as including realistic and sophisticated reenactments of certain events, so we can see exactly how it all happened. And yet, as the film progresses, we realise that there may be more to this story than meets the eye. It’s an incredibly complex, gripping tale, and as inconceivable as it sounds, it’s all true.

Tim Burton’s biopic of cult filmmaker Ed Wood (played by none other than Johnny Depp) reveals the stories behind the production of some of the most famously terrible films ever made, including Glen or Glenda, Bride of the Monster, and Plan 9 From Outer Space (Seinfeld, anyone?). The film, shot entirely in black and white, also tells audiences of a tale that is perhaps even stranger than Wood’s films themselves – his own life story. Wood – who is commonly disregarded as an awful, irrelevant figure in film – is revealed to be quite a complex and endearing underdog, who refuses to let flop after flop deter him his dream of clawing his way to Hollywood success. He also deserves at least some praise for his bravery in making Glen or Glenda, a film which exists as a plea for tolerance in an extremely bigoted society.

The rise and fall of Stephen Glass’ career as a fraudulent journalist served as the basis for this critically acclaimed drama. Shattered Glass recounts the story of Glass (Hayden Christensen), a man who built the basis of his success by fabricating stories and presenting them as truth to The New Republic magazine. Glass got away with this technique a whopping twenty-seven times before anyone took notice, despite the fact that his articles were supposedly “fact-checked” by the magazine. The problem with magazine fact-checkers is that they never bother to check the credibility of the article’s subject itself. Stephen Glass knew this, and he took advantage of it. You can’t help but begrudgingly respect him for doing what every honest, hardworking journalist has fantasized about: just making a story up.

Steven Spielberg’s The Terminal stars Tom Hanks as Viktor Navorski, a traveler from the fictional country of Krakozhia, who arrives at JFK International Airport only to learn that his passport is suddenly invalid, meaning that he can’t enter the United States. At the same time, a civil war breaks out in his home country, leaving Navorski stateless and unable to return to Krakozhia. Unable to go anywhere else, he is left to live in an odd state of limbo between the U.S. and his home – the airport terminal itself. And so, to the bewilderment of the U.S. Customs officials, Navorski settles into JFK, with nothing but his luggage to help him. This incredible plot is based on the true story of Mehran Karimi Nasseri, a man who spent an astonishing 18 years in Paris’ Charles de Gaulle International Airport in1988.

“The robbery should have taken 10 minutes. 4 hours later, the bank was like a circus sideshow. 8 hours later, it was the hottest thing on live TV. 12 hours later, it was history. And it’s all true.” This is the statement that was printed on Dog Day Afternoon’s theatrical release poster, and it’s really all you need to know about the movie. Inspired by the true story of John Wojtowicz and Salvatore Naturale, the film tells the tale of how these two inexperienced criminals attempted to rob the First Brooklyn Savings Bank. Al Pacino plays the surprisingly gentle bank robber Sonny Wortzik, whose main goal seems to be getting as much money as he can without hurting anyone in the process. Interestingly, his motives for the crime are left a mystery for most of the film, making the robbery itself the focus of the story.