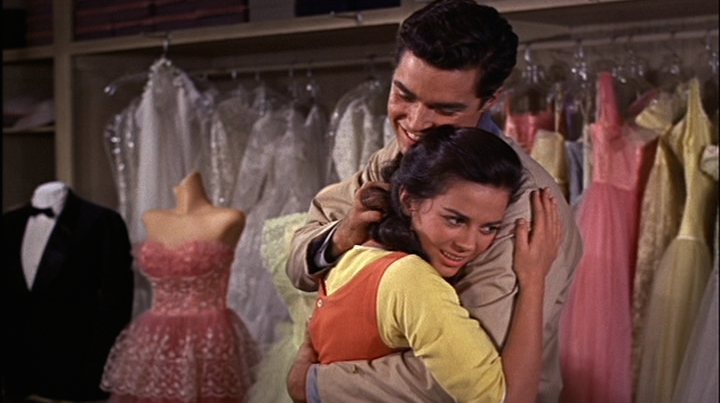 Olivia Newton-John plays Sandy a sweet as pie teenage Australia, who falls in love on a summer vacation. Then to add a spanner to the works a ‘change of plans’ lands her at the same school as her summer fling, greaser Danny (John Travolta) Singing songs above heartbreak and devotion accompanies this couple as they seek to try and rekindle there ‘summer love’ but will they be able to? This 70’s classic will keep you singing and dancing on those quiet weekends when you stay in. Grease is the word!

I just met a girl named Maria, and she was in West Side Story, played by Natalie Wood, she depicts a girl in the middle of a gang ‘war’ who loves both her brother and her newly formed relationship with Tony (Richard Beymer). Which seems sneaky and fun until their respective friends and family find out. Tensions build and songs of desperation and love are sung, but when tragedy strikes, will they ever be able to love like they wanted to when it all began? West Side Story is a musical for people who love forbidden love stories and good music to accompany it.

A trip down the aisle you will never forget! Music from ABBA set in beautiful Greece? What could better? Bride-to-be Sophie (Amanda Seyfried) is on the search for her father, and along the way she finds a diary of her mother’s (Meryl Streep), now that she has three possibilities and has invited them to her wedding it’s time to complete planning whilst trying to hide the three men from her mother. Something was always meant to go wrong! Mamma Mia is for ABBA fans who want to relieve the songs again, and romantics at heart who want to listen to some classic songs whilst watching a love story unfold in front of them.

A remake of the John Waters 1988 film of the same name. This film is sure to have you dancing in your living room. Set in 1962, pleasantly plump Tracy Turnblad is all about dancing and integration. Gaining a spot on a local dance show, she starts to become a house hold name and helps 1960’s Baltimore become more comfortable with integration on television and in reality. This crazy film will have you dance and sing-along whilst also dealing with the serious issues and the 1960’s. With a great cast of actors and singers, it couldn’t be better for a cold winter’s night. Especially if you want to see John Travolta dressed as a women!

1920’s Chicago, Roxie Hart and Velma Kelly, both find themselves on death row, both trying to keep themselves out of the gallows and fighting to be famous, the two will do almost anything to get noticed. Catherine Zeta-Jones and Renee Zellweger both light up the screen with sassy and sexy new songs and dances whilst trying there hardest to get out of jail and live the life that they had always wanted and see their name up in lights. Chicago is for people that loved the style of the 1920’s and the music that would be sounding from every burlesque club in Chicago. Relive the decade with this musical.