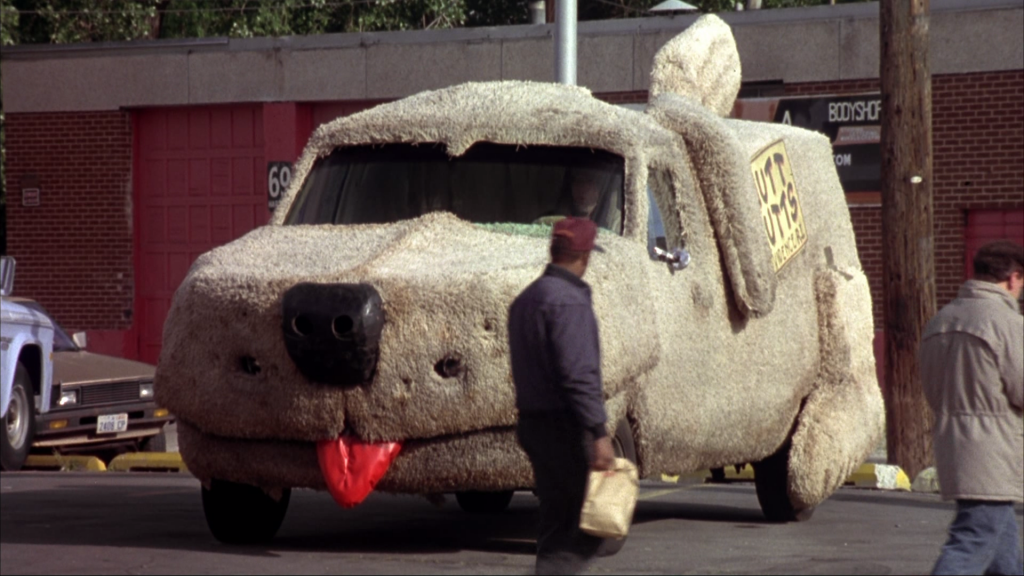 Jump into the drivers seat, this baby’s an icon! It’s not just the intuitive production design and movie star smelling interior, these models rise above the lot in terms of legendary status. Look at that detailing, it’s seamlessly integrated into the plot and handles like a pro. No doubt about it, these here are your top 10 movie car classics – so let’s take a test drive.

This is the car from the car movie that started them all. Picture it – 1962, you’re an all-American adolescent cruisin’ the streets in your striking hotrod on a restless summer’s night. You’re oozing cool, you’re coming of age, and you’re not yet fully aware of the revolution that awaits. George Lucas was inspired by his own youth and experience with car culture into creating this classic while driving it’s now infamous canary yellow Coupe into the history books.

Formerly owned by Mount Prospect City Police, this decommissioned squad car is the ideal stunt vehicle. Perfect for chase scenes, leaping across drawbridges, and mid-air suspended flight, if you love to hoon then this is the shitbox Dodge for you. Unfortunately the cigarette lighter doesn’t work but don’t let that minor defect prevent you from appreciating what Dan Aykroyd once described as hottest police car of the 70’s.

It’s not the only Shaggin’ Wagon on the market, but this one is the ultimate road tripper! If you and your bestie spontaneously decide to uproot your lives and hike from Rode Island to Aspen, you’ll need something trusty. With a level of fun that only a high-pile plush sheep dog exterior can offer, this suitably joyous people mover will easily accommodate all of your hijinks and slapstick. Downside is, the original owners might want it back for a sequel. Don’t worry, they’re not too bright when it comes to bargaining.

This is definitely the slickest on the market and the most famous of all the Bond cars so the memorabilia value is incredibly high. Perfect for the superior spy, this Aston features all the mod cons including bulletproof panels, machine guns, and an ejector seat. As always, it’s effortlessly stylish and just as dapper as the man himself, so will undoubtedly attract Pussy Galore.

Before we look under the bonnet just remember that this thing isn’t just a car, it’s a symbol. Ok so it needs some work, but only on the suspension, shocks, break pads, lining, steering, transmission, rear end, rings, mufflers, and a little wiring. Ray scooped it up for a bargain at only $4800 and despite all of those repairs (and some gargantuan inflation) it’s worth it to have this instantly recognisable work vehicle that really promotes the business.

Is character your thing? This one has loads of personality! Don’t underestimate this little beetle though, he becomes a real speed demon on the track. You might think this little guy doesn’t belong up there with the big leagues but let’s face it, who hasn’t heard of Herbie?! After a series of car auditions (this is actually serious) Disney chose the veedub and the subsequently inspired an influx of beetles around the globe. We couldn’t imagine any other car donning the trademark 53 and conversely if we hadn’t been infected with The Love Bug, I doubt any of us would have experienced a punch buggy.

With outstanding off-road capability and a build engineered to withstand the most extreme dessert, murderous biker gangs, and a drought stricken Aussie apocalypse, this chassis is made of tougher stuff. I don’t recall my parent’s old Ford ever being nearly so cool but that’s because nobody’s was. Except Max’s. Fuelled partially by a young untainted Mel Gibson’s charisma, this is the stuff that anti-heroes are made of – Grit, charm, and in this case the sickest bodykit you will ever see.

I know there are others similar on the market, but in my opinion, this ultra stylised gothic number from the haus of prime Tim Burton still takes the cake. Perfect for the superhero who wants to anonymously fight crime but still really craves the attention that only a anthropomorphic comic book inspired sense of fashion can offer. Sit back, blast some Batdance on the sound system, and enjoy the most fun of Batman’s rides before things get oh so serious.

Check out the stainless steel finish! This mega classic is equal parts techno futuristic and 80’s vintage much like the genre bending film itself. Breathtakingly balancing sci-fi, fantasy, and comedic aesthetics, it looks amazing and what it does is even better. The Doc’s DeLorean comes with full add-ons including the obvious time travel capabilities and a sneaky V8 engine refit – Apparently the standard release model didn’t have enough oomph to reach the 88mph required to fire up the flux capacitor so the producer’s switched. I dare anyone in the current time space continuum to not want to drive away with this legend, it truly is the epitome of movie car icon.