"Another argument for a faster-paced narrative is that some of the satire here is intuitive to anyone who has lived through recent history."

The past five years have witnessed twin assaults on truth and science in the social sphere. The ascension of Donald Trump ushered in the concept of “fake news,” which could be any inconvenient truth considered damaging to the person who describes it as such. Then COVID-19 took that pernicious partisan trickery and applied it to science, causing millions of people to deny plainly observable facts from the natural world, instead opting for gonzo alternatives like linking vaccines with 5G reception. The past five years may have put these tendencies under the microscope, but they are innately human tendencies that reflect a denial of unpleasant realities from time immemorial. 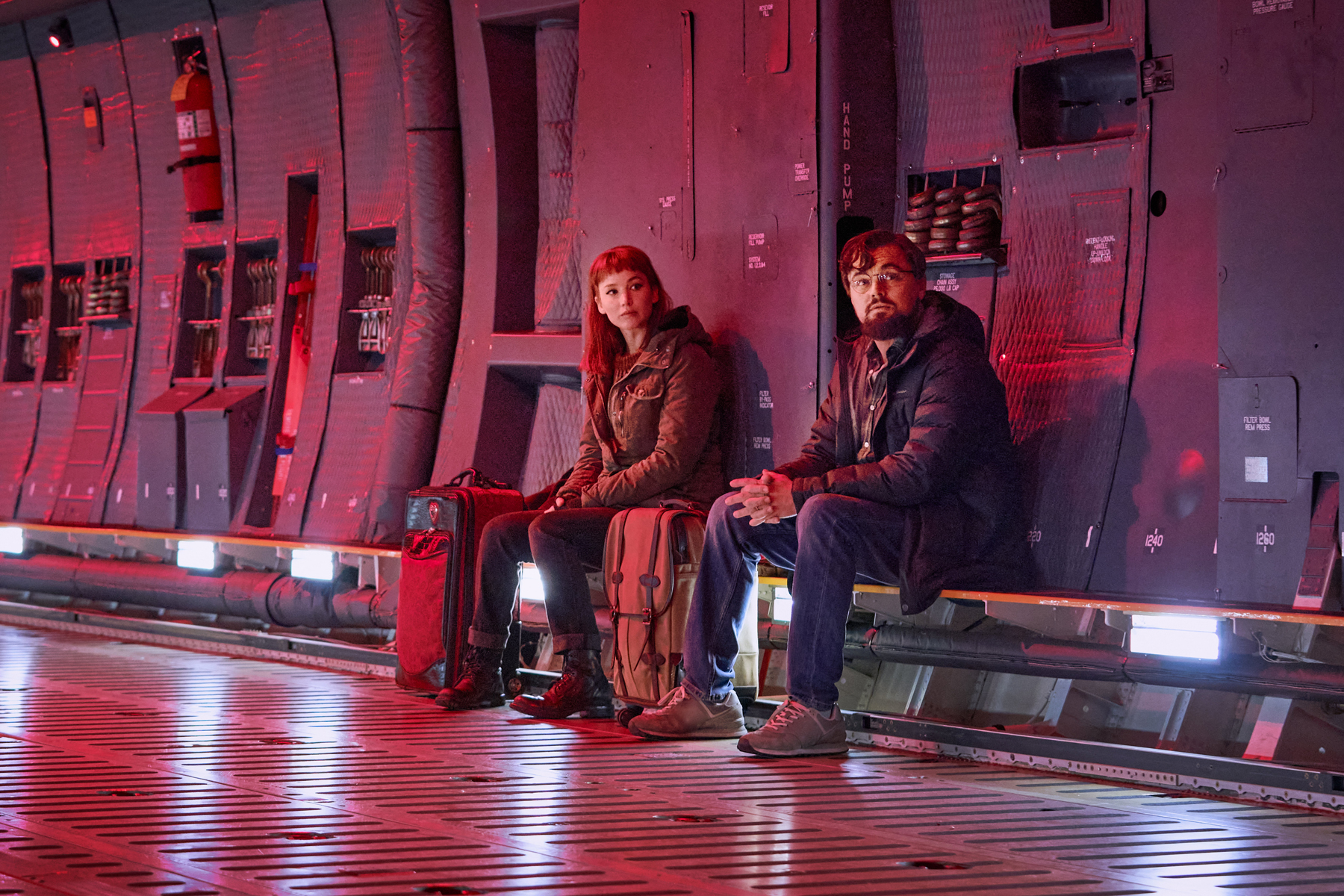 Thus creates the perfect conditions for Adam McKay’s new social and political satire, Don’t Look Up. The premise contains an ideal metaphor for what we’ve gone through in the history of the species, especially recently. There’s a comet the size of Mt. Everest hurtling toward Earth, whose likelihood of collision with the planet has been calculated to more than 99 percent. Yet among a short-sighted, self-interested, suicidal species like human beings, there’s widespread doubt the space rock even exists. Those who do acknowledge its existence, however reluctantly, first assess how they can profit from it, politically or materially, rather than how to save the planet from an extinction level event.

As a sign of the clout accumulated by Will Ferrell’s former creative partner, McKay has assembled the best cast of the year to deliver his excoriating indictment of humanity. The first four cast members you’d be inclined to name – Leonardo DiCaprio, Jennifer Lawrence, Cate Blanchett and Meryl Streep – are all Oscar winners, and DiCaprio and Lawrence have already been nominated for Golden Globes for their performances here. The ensemble gives us a throwback feel to both 1970s disaster movies and outrageous satires like Wag the Dog, while containing the arch sensibilities and signature narrative flourishes McKay has offered recently in The Big Short and Vice.

Kate Dibiasky (Lawrence) is an astronomy PhD candidate who is rocking out to Wu Tang Clan on her headphones when she spots a celestial body moving rapidly toward her general vicinity. At first it’s a discovery worth celebrating with her local crew, who include her professor, Dr. Randall Mindy (Di Caprio). As Dr. Mindy starts to do the calculations, though, he dismisses the revellers for the night and admits to Kate that this thing is going to hit Earth – and that it’s what they refer to ominously as a “planet killer.” And by the way, how does Comet Dibiasky work as a name for the planet killer she just discovered?

The characters we meet from here form an hilarious obstructive wall to any attempt to avoid the extermination of the human race. They include the U.S. president (Streep), her chief of staff and obnoxious Trump Jr.-style son (Jonah Hill), a pair of shallow and nattering talk show hosts (Blanchett and Tyler Perry), and an Elon Musk-inspired billionaire (Mark Rylance) who may have the technology to break the comet into “manageable” chunks. He prefers this to diverting its path, you see, because the rock contains trillions of dollars worth of minerals he could use in his tech empire. And because he’s one of the president’s biggest donors, she’s more than happy to go along with the risky proposition.

In a cast that runs much deeper than the names listed so far, there are a few particular standouts. Rylance nails the autistic qualities of his pale-skinned genius, who’s been isolated not only from the sun, but from any sense how to interact normally with other humans. (Oh, and Rylance is a fifth Oscar winner if you’re keeping track of that sort of thing.) Despite never sharing any screen time, Streep and Blanchett are locked in a film-long duel for who can be the most vain and venal. Lawrence is acerbic and incredulous at the depth of others’ inability to take action, while DiCaprio’s midwestern naif gets caught up in the machinery surrounding his christening as “the hunk of the astronomy world.”

McKay cut his teeth with broad comedies like Anchorman and Step Brothers, and he continues to bring a sense of the absurd to the more pointed targets of his humour. A great recurring joke is how Kate puzzles through why one of the president’s top military advisors (Paul Guilfoyle) charged them $10 apiece for free White House potato chips and water. It’s not something you need in a comedy with bigger fish to fry, but it adds personality and keeps the probable end of the world feeling light and bouncy. 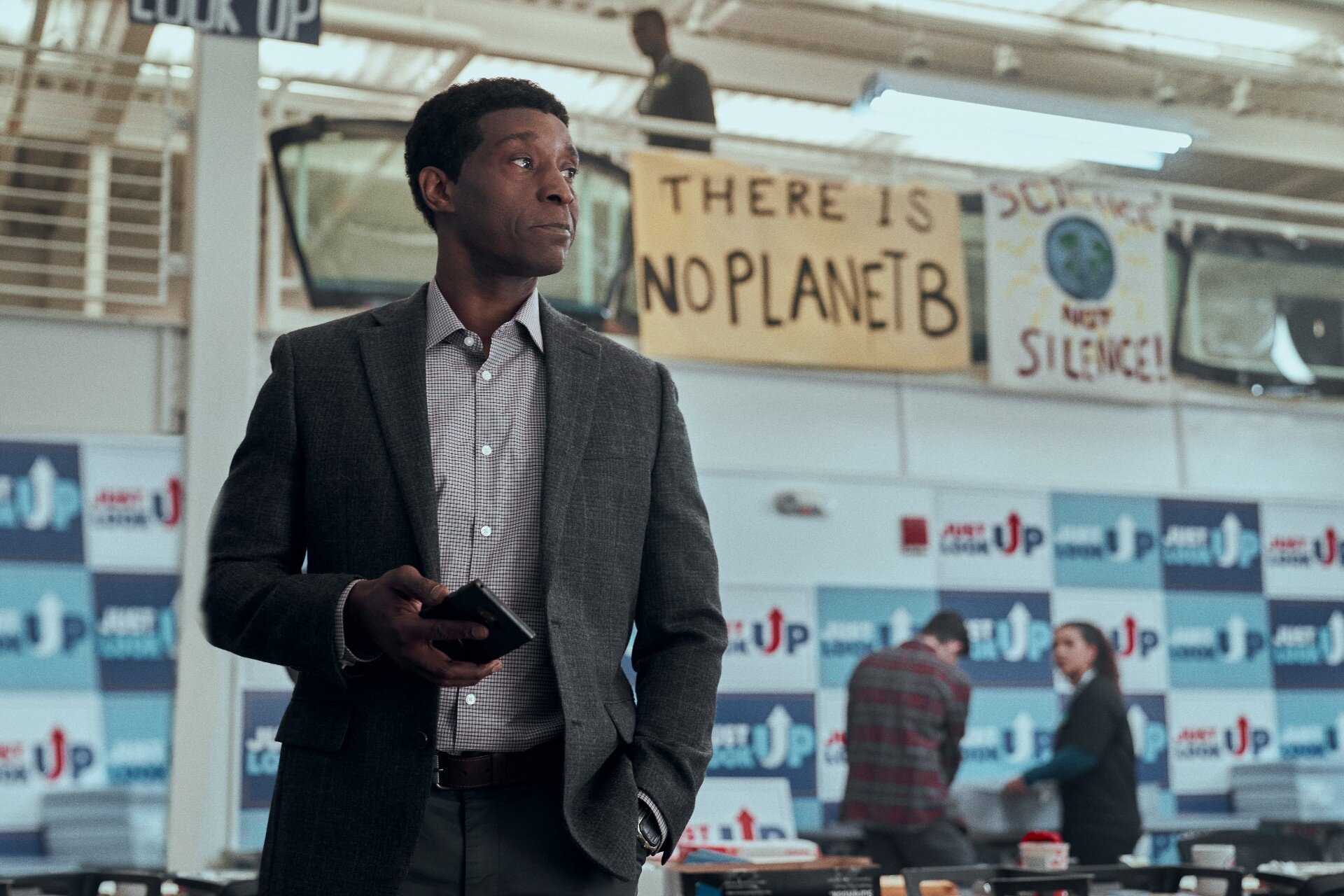 This joke also reminds us that the film could have been tighter. The most effective satires get in with a laser focus on their targets, then get out as soon as the job is done. One of the best of the 21st century, which also happens to explore the self-destructive stupidity of human beings, is Idiocracy, and that thing is only 84 minutes long. Don’t Look Up runs nearly an hour longer, and parts of it would lift right out to reduce the flab. There’s a fair amount of screen time devoted to Dr. Mindy’s wife, played by Melanie Lynskey, and a late-narrative romance between Kate and a wayward kid from her hometown allows Timothee Chalamet to increase the film’s star wattage. Did we strictly need these things if McKay could have gotten the job done faster and with more bite? Possibly not.

Another argument for a faster-paced narrative is that some of the satire here is intuitive to anyone who has lived through recent history. The COVID metaphor strikes us early on, and though the ways it’s drawn out are all pretty pleasurable, the reality is that “drawn out” is the correct way to describe it. Another extended bit involves a vapid singer/social media darling played by real-life vapid singer/social media darling Ariana Grande, and her on-again, off-again relationship with another pop star, DJ Chello (Scott Mescudi, a.k.a. Kid Cudi). The fact that people are far more interested in their latest drama than in the possible destruction of the planet is a bit obvious, if still funny. 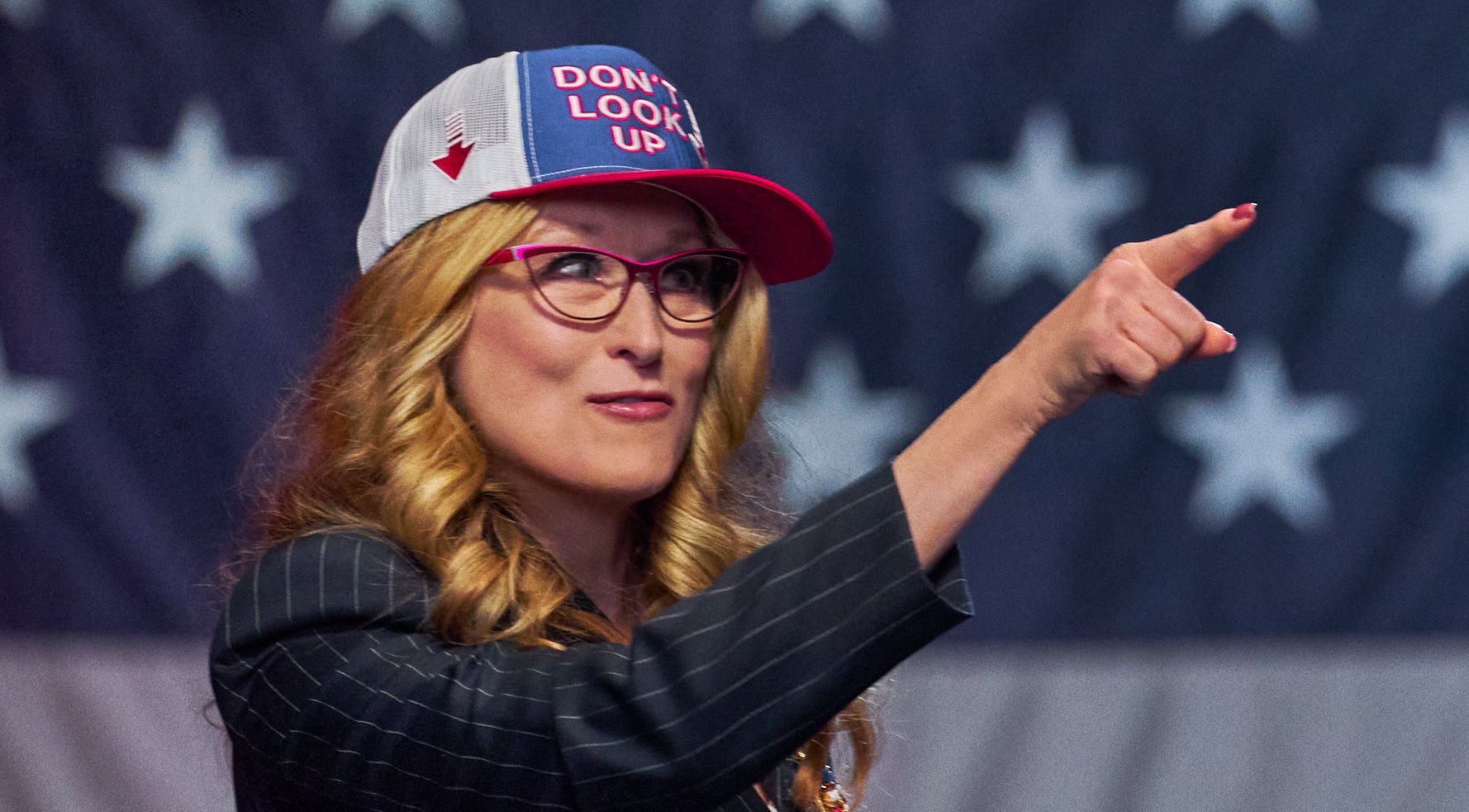 If Don’t Look Up is overstuffed, at least it’s overstuffed with quality. In addition to being shorter, the best satires are also merciless, and Don’t Look Up is on point there. The branch of the satire involving celebrity worship feels especially pungent, given that this is a film chock full of celebrities, effectively giving its audience a fix at the same time it warns us of preventable tragedies in our real world, from COVID to global warming. The stars may have come for the chance to work with one of today’s most wicked humourists, but they stayed to hold a mirror up to a viewership in denial.

Don’t Look Up has just begun streaming on Netflix and is still playing in cinemas.