Watch out for that missile! It’s a dooooozy! 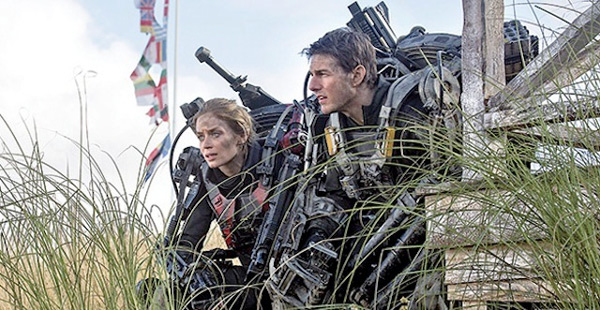 It’s a discouraging indicator of the state of large-budget Hollywood filmmmaking that Edge of Tomorrow is surprisingly good. Surprising because, for its nearly two-hour running time, the new Tom Cruise film is entertaining. You might think that entertainment should perhaps be the dominant impetus in blockbuster filmmaking but it’s somehow often inexplicably absent from the greater part of major cinematic releases. Disappointment has become far too frequent and accepted, ludicrous considering the enormous amount of money poured into these films. Perhaps enjoyment of Edge of Tomorrow is dependent on expectations being hammered into the ground by Hollywood over the years but either way it’s refreshing to leave a multiplex without regrets.

Aliens known as Mimics have attacked Earth and conquered much of Europe. A push into France is mankind’s final attempt to repel the invaders. Lieutenant Colonel Bill Cage (Tom Cruise) is dropped into a war zone with little combat experience and is killed within the first five minutes. Waking up the day before the invasion, Cage discovers that he has the unique ability to reset events and change the course of the war. Reliving the invasion, which is essentially a suicide mission, day after day, Cage eventually meets Rita (Emily Blunt) on the battlefield, and realises she may be the only one who can help him win the war.

It’s difficult to talk about Edge of Tomorrow without making mention in some form of the Bill Murray classic comedy Groundhog Day. The premise is essentially identical. Many of the successful elements of Edge of Tomorrow were also some of the better parts of Groundhog Day. This isn’t a criticism. Considering how complementary of Groundhog Day much of Edge of Tomorrow is the film never really suffers for it. It is perhaps a testament to the strength of the concept of the Bill Murray film, but ultimately the significance of using reality repetition as a method of betterment is interesting even when entirely unoriginal. Edge of Tomorrow uses the idea cleverly. There are some flaws within the logic the film sets for itself, but by and large director Doug Liman (The Bourne Identity, Mr and Mrs Smith) either exploits the concept smartly or at least bombards us with enough flash to distract from the lack of rationale. 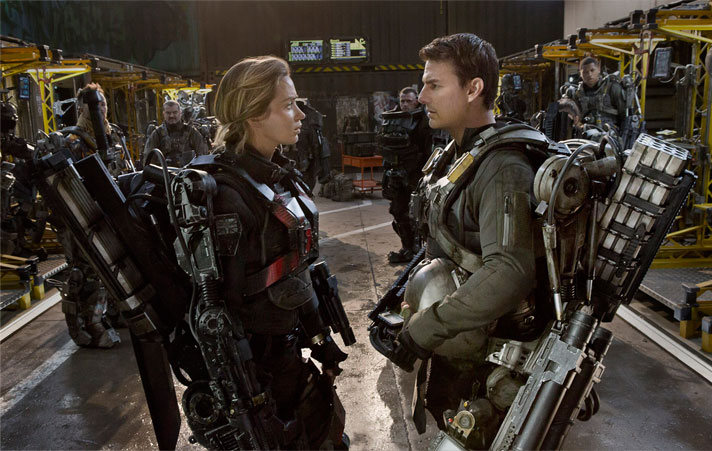 The sense of existentialism that subtly permeated Groundhog Day isn’t present in Edge of Tomorrow, but in lieu of thought Liman generates action-based fun. Rather than using his situation to explore an avenue of options, Cage instead engages with the repetition to single-mindedly pursue one goal to perfection. The D-Day-esque battle scene that we witness repeatedly with variations is dynamic and choreographed with frenetic energy. The relationship between Cruise and Blunt is also nicely developed. The sense that with every day he gets to know her more while her reality is reset, rendering her oblivious, has a real bittersweetness to it. The character of Cage himself, a cowardly corporate figure from the outset, grows over the course of the film. Cruise has always been at his most intriguing when exploring weakness and this is no exception.

Edge of Tomorrow is of a quality that should be standard in Hollywood filmmaking but isn’t. It’s escapism at a captivating level and certainly an engaging way to spend a couple of hours. There’s nothing original about the scenario of Edge of Tomorrow nor in the way the film is presented. It’s a precise concept executed skilfully. Doug Liman may never have a significant film in his repertoire, but his track record remains more impressive than many of his contemporaries.