"The colours pop, the camera tracks its subjects in unusual ways, the images bob and weave in the frame. "

"Defoe is the glue that holds the disparate parts of the movie together. "

For children with active imaginations, anything can be a magic kingdom – even a strip of garish gift shops and extended stay hotels leading up to the actual Magic Kingdom in Orlando, Florida. Being “Disney adjacent” does not give these locations any vicarious glow, but try telling that to the young kids who run wild in the carparks, stairwells and surrounding foliage of the Magic Castle Hotel and its neighbouring Futureland Inn, while their parents pay them varying degrees of attention.

In general, parenting standards have changed such that children are no longer let loose to explore, excavate and sometimes destroy like they did a generation or two ago. The children of Sean Baker’s The Florida Project may be the exception to that rule. While the film celebrates this, it also shows the costs associated with parental neglect – but without the heavy hand that might typically accompany such material. 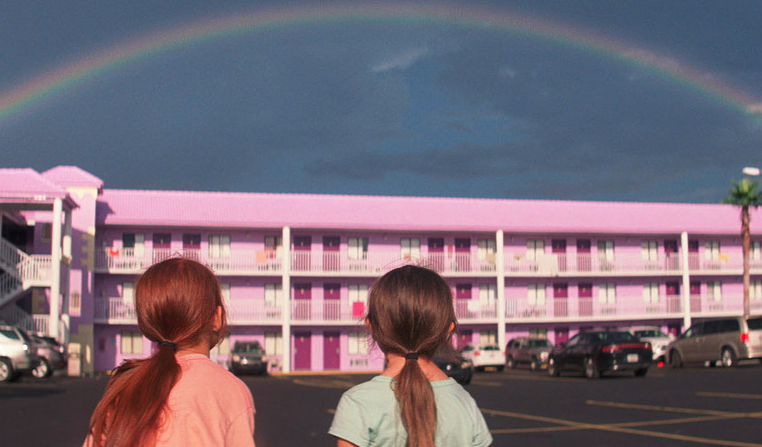 Baker is known to us as the man behind the 2015 sensation Tangerine, which used iPhones to film the day-to-day lives of transgender prostitutes in Los Angeles. He’s looking at a more mainstream type of day-to-day lives (poor Floridians) with a more mainstream camera (35 mm), but equal vibrancy and buoyancy. The colours pop, the camera tracks its subjects in unusual ways, the images bob and weave in the frame. From these two films it feels clear that Baker sees the world differently than we do. Certain aesthetic choices recall other movies set in Florida or other movies about downtrodden Americans, but Baker brings a distinctiveness that is all his own.

Our main character is Moonee (Brooklynn Prince), a six-year-old for whom the term “precocious” would be an understatement. Taking a lead from her mum, Halley (Bria Vinaite), Moonee has a CBF attitude that gets the other children she eggs on in far more trouble than it gets her. Halley has no conventional employment, selling wholesale perfume in carparks before being shooed away by security, so she basically thinks of herself as winning if her child makes it through each day alive, never mind reprimanding her for misbehaviour. The film is basically a slice of life of what these children get up to as their parents drudge through an existence that involves a lot of their own hanging out in hazes of cigarette smoke. It’s also improbably joyous.

Trying to throw his arms around the whole thing and keep these lives on track is the manager of the Magic Castle, played by Willem Defoe. Defoe’s Bobby is modest in his sainthood. He has rules he has to enforce, walls he has to paint, power he has to restore after the children cut it, and a boss he has to answer to, but between that he serves as the humanistic mediator on various tenant disputes, giving of his personal energies in a way the job would not naturally demand.

Defoe is the glue that holds the disparate parts of the movie together. He’s garnered a deserved Oscar frontrunner status for giving the type of performance that is emblematic of Baker’s approach to filmmaking. In many respects Bobby is just doing his job and sometimes he’s even irascible, but he has a kind of unassuming fatherly manner that can only be born of innate goodness. He doesn’t make a show of the kindnesses he performs; he just performs them. It’s an indescribably winning performance from a man who has recently crossed into his sixties. Now feels like “his time” to be honoured with end of year awards. 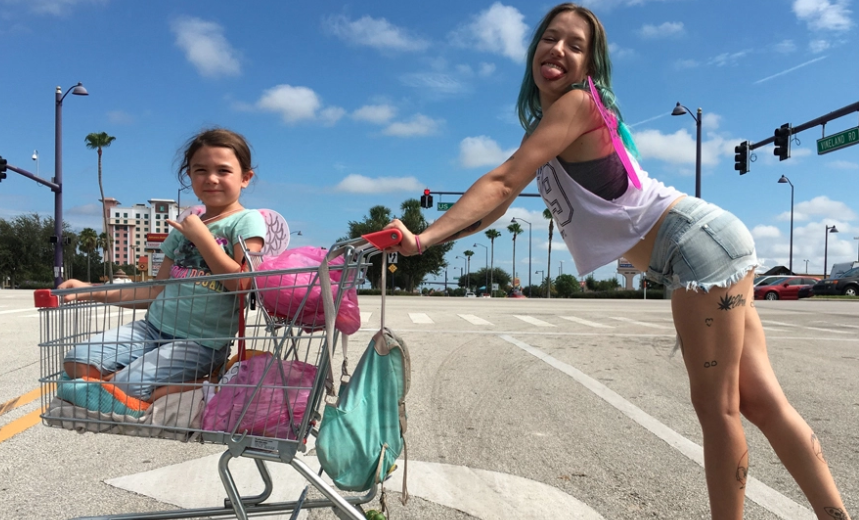 In a way, The Florida Project taps into some of the same themes and emotions as Richard Linklater’s Boyhood. It takes place over the course of a couple weeks rather than 12 years, but in that time, the same ephemeral elements of childhood are explored. In an opening scene, we see a boy who gets in trouble for an extended episode of spitting from the upper balcony on the windscreen of a car belonging to one of the guests. The other kids did it too, but he’s the only one who really gets punished – by a father who, judging only from appearances, would seem to be on the neglectful end of the spectrum. He’s missing from their next few escapades, and the next time we see the boy, his father is packing up their car to move to New Orleans, allowing the children to choose from the toys they can’t fit in the car, promising he’ll buy his son all new toys once they get to their destination. Then they’re gone. New toys, new friends, ashes to ashes, dust to dust. Life rolls forward. 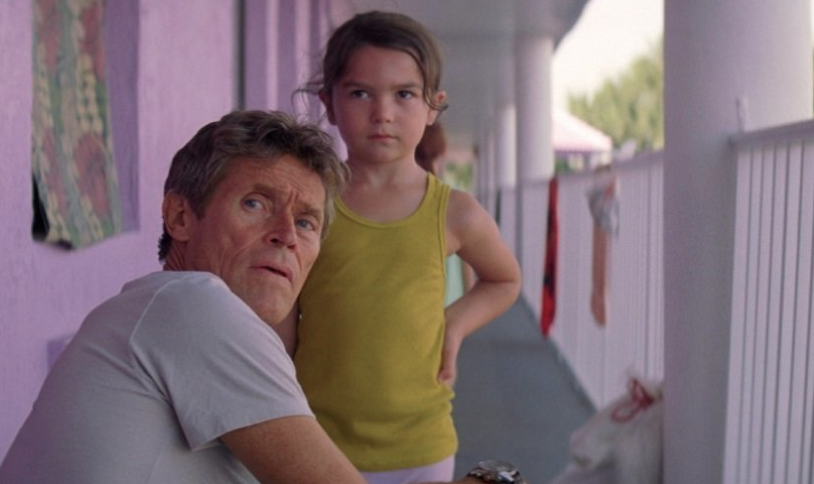 There are some moments of The Florida Project that feel a bit slack, as may be the case in a film that dwells in mood and does not require its scenes to be edited in this exact sequence. Fifteen minutes could likely be shaved from its 109-minute running time. But the accumulated emotional effect of the scenes Baker has chosen to show us is undeniable. Not only are the relationships between the children explored believably and with surprising depth, but one friendship between adults goes through a heartbreaking evolution in which one demonstrates her love for the other in the face of betrayals that would ordinarily disqualify that love.

Let’s finish with those children, though. It would be hard to imagine a film in which children more naturally played themselves. They are hyper and spasmodic and stream of conscious. They tell stories that go nowhere, they jump on things and throw things just because they’re there. They lick ice cream cones like rapacious lizards. In short, they don’t feel the least bit directed. That moving bonds with major payoffs develop from these conditions is just further evidence of Baker’s first-rate artistry.