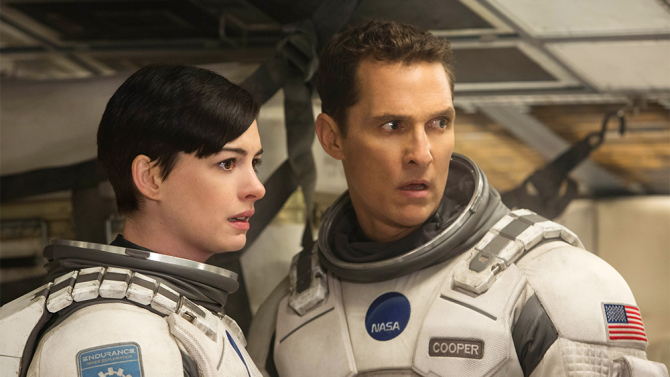 “Man cannot discover new oceans unless he has the courage to lose sight of the shore.” – André Gide

From the very first, Christopher Nolan has forged his career by examining men who restrain their emotions and repress their basic human instincts in order to get the job done. Interstellar, his new film, is entirely at odds with this sense of calculated reason. It’s a film in which emotion and passion conquer logic. Characters herald love as the most powerful force in the universe, even when they were literally dealing with the speed of light and gravity not moments before. But Nolan’s discomfort in this newfound sentiment is abundantly clear, the filmmaker engaging with almost impenetrable scientific formulas and cheap emotionalism to mask that fact that his grasp on the human condition isn’t nearly as firm as his appreciation for rationalism.

In a future not too distant from now, the world is in a state of disquieting environmental decline. Food resources are becoming grievously low, the entire Earth having seemingly degenerated into a perpetual renaissance of the 1930s Dust Bowl disaster. Cooper (Matthew McConaughey), is a former pilot-turned-farmer, his skills and training having become entirely redundant in a world solely concerned with the cultivation of crops. A single parent, not particularly fond of his forced vocation, Cooper still marvels at the possibilities of scientific discovery, encouraging his children to see patterns in chaos. When his younger daughter Murph (Mackenzie Foy) directs him to a seemingly supernatural anomaly occurring in her bedroom, Cooper recognises coordinates in the mystery and is eventually led to secret headquarters of what remains of NASA. 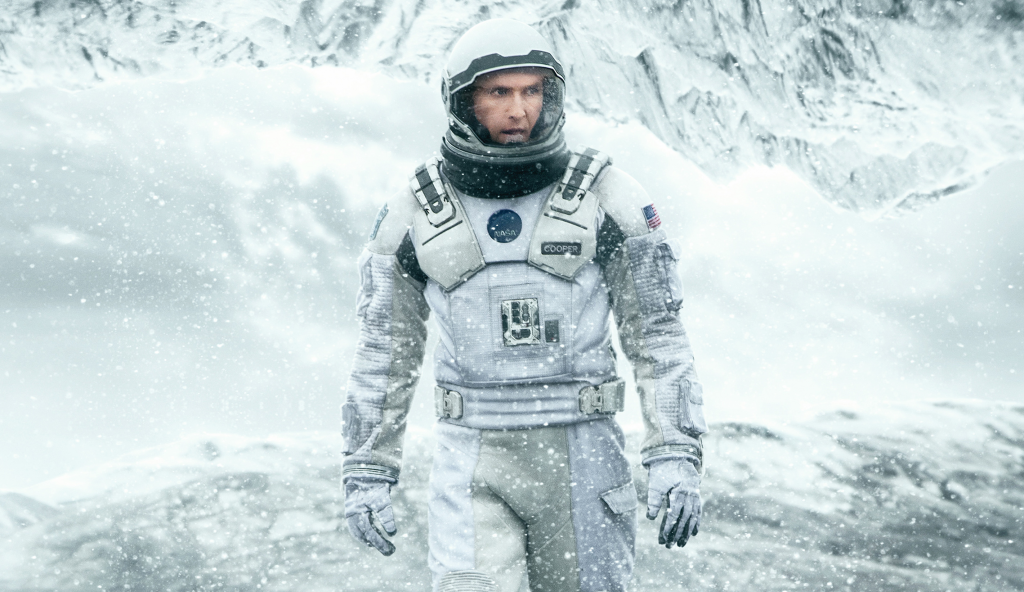 By a happy coincidence, the organisation is now headed by an old professor of Cooper’s, Dr. Brand (Michael Caine), who coerces his former student into considering a mission into outer space in a last ditch attempt to find an inhabitable planet for humans to relocate to. “We’re not meant to save the world. We’re meant to leave it,” Brand encourages Cooper’s intrepid nature. Somewhere near Saturn, scientists have located a disturbance in space-time, or a wormhole, which essentially acts as a gateway into a distant galaxy. Initially hesitant to leave his family behind, Cooper is eventually convinced that travelling through the wormhole on a voyage of discovery might be the only hope for the human race.

Scientific theory and complex thought need not be daunting. If a concept is difficult to grasp then the onus is on the conveyer of that concept to gauge the attention and comprehension of an audience. Nolan has tried to make a film about simple human emotions and yet suffocates his narrative by weaving complicated scientific notions into almost every exchange. It’s admirable for a film not to condescend, but when such abstract ideas as relativity and gravity are in question it’s important to foster audience comprehension rather than alienate, which Nolan does here to maddening effect. This intellectual detachment ultimately means that it’s difficult to engage with a lot of what goes on in Interstellar. There are moments that could have been wonderful had they been granted even just a bit more context. The essence of proceedings is certainly gettable, but why make every theory impervious to the casual ear?

As the journey progresses it becomes increasingly apparent that Nolan’s intellect is covering for a lack of a coherent vision. Caine’s character recites Dylan Thomas’ “Do not go gentle into that good night” so excessively that that not only does the poem begin to lose meaning but the inherent meaninglessness of Interstellar begins to become abundantly clear. The film is about no less a lofty topic than human nature, but the filmmakers have nothing substantial to say on the matter, objectively or subjectively. Vague acknowledgements of our constitutional need for survival are made but there’s never a sense that Nolan knows what he wants to convey, let alone how to convey it. It’s not enough to recapitulate Thomas’ poem. We know what that poem means. It compliments Nolan’s narrative ambitions, but it doesn’t add to them. 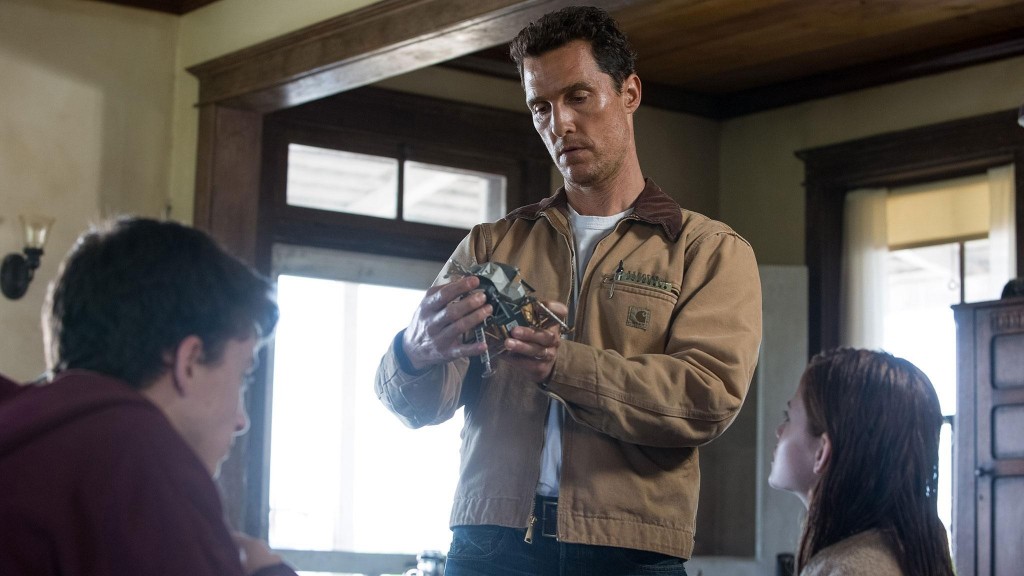 At the heart of Interstellar is exploration, and the joy of discovery. It’s when Nolan focuses on the staggering possibilities of the universe that the film is at its best. Visually, Nolan’s outer space is outstanding, and has certainly found much inspiration in Kubrick’s 2001: A Space Odyssey. The film has no doubt been made with the best of intentions, and Nolan’s enthusiasm for scientific inquiry is obvious. Since the Golden Age of exploration, when Fawcett, Burton and Shackleton (the spacecraft in Interstellar is named after Shackleton’s ship ‘The Endurance’) etched out blank spots on the map, the world has all but lost those blank spots. Nolan looks to the stars as our next port of call. A shame then, that Cooper’s journey is born out of necessity rather than a more fundamental thirst for adventure and expedition. The frequent visits to the dying Earth, designed to give the expedition some form of urgency, hinder the narrative. Worst still, they disrupt the journey of the Endurance as it reaches to the far corners of space, which perhaps should have been Nolan’s sole focus.

Interstellar is a film of immense ambition, and occasionally the film that Nolan might have made shines through. As a celebration or an examination of humanity, Interstellar falls short for lack of real insight or indeed anything of consequence to say on the matter. As a science fiction adventure it divorces itself from the audience through convoluted scientific theory. There are some moments of genuine clarity, but for such an accomplished filmmaker, they are brief and they are rare. Clearly intended to be enjoyable as well as thought provoking, Interstellar is regrettably neither.