The cast is outstanding and the narrative is compelling in director John Krokidas’ first feature film, Kill Your Darlings. Based on true events, the film chronicles the beginnings of the Beat generation, a group of writers who began one of the most famous writing and cultural movements in the recent history. Specifically, the film focuses on the early university days of one of America’s most well known poets, Allen Ginsberg, played here by Daniel Radcliffe.

Leaving his father to care for his mentally ill mother, Allen Ginsberg is heads off to Columbia University to study writing and poetry, for once living his own life. At Columbia, he meets Lucien Carr (Dane DeHaan), whose somewhat radical behaviour leaves a strong impression, and intrigues Ginsberg. Lucien introduces him to his friends, who include now well-known Beat writers William Burroughs (Ben Foster) and Jack Kerouac (Jack Huston). Together they come up with the idea for a ‘New Vision’; a new way of creating and thinking that is far from the traditions of the university. However, dramas and tension in their personal lives are never far away, particularly for Lucien, whose sometimes friend and possible lover, David Kammerer (Michael C. Hall), is always on the edge of their group.

Kill Your Darlings is absolutely stirring. It is impossible not to cheer for Ginsberg and the others as they challenge the institution with their own creative ideas. It’s intoxicating to watch them experiment (with alcohol and drugs aplenty) as they search for new forms of writing and for new ways to broaden their minds. Krokidas makes use of some interesting editing, and plays with time and motion in a way that is at first a little jarring, but soon feels as natural and necessary as any other part of the film.  The film is both amusing (particularly when it comes to Burroughs, who Ben Foster plays with a dry, sarcastic style) and deeply involving, even empathising. I was completely drawn in by these characters struggles and their triumphs, and I felt their anger and frustration right along with them. 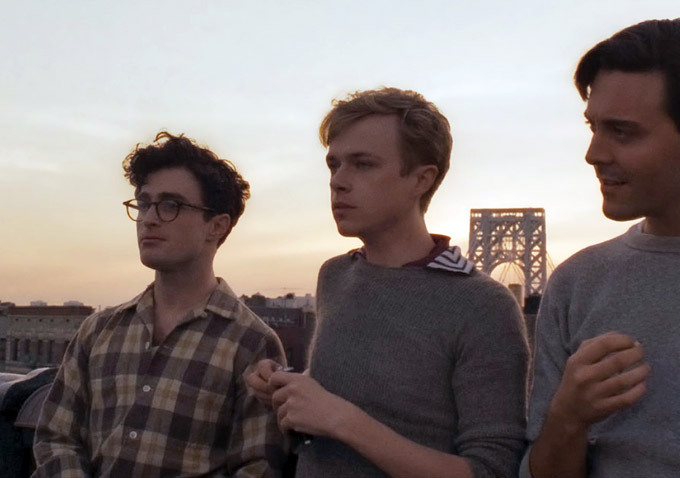 Being a film about literary revolution, Kill Your Darlings still remains deeply emotional and very human; its primary focus is the exploration of the internal struggles, and the relationships and connections between these writers. At the centre of it all are Ginsberg, Carr, and Kammerer. Kammerer is portrayed in the film as a past (and perhaps a present) lover of Lucien’s. What’s clear is that whatever their relationship has been, Kammerer is now deeply obsessed with Lucien, and can’t let go.

To say the performances are praiseworthy would be an understatement. Hall’s portrayal of Kammerer is superb, and ultimately left me pitying him, despite his disturbed and possibly dangerous frame of mind. Lucien himself is confused and oftentimes seems helpless as to what do or say. This is all further complicated by the presence of Ginsberg, who it seems is equally infatuated. The chemistry between DeHaan and Radcliffe is electric, even erotic. As for their individual performances, I can’t praise them enough. Radcliffe, who seems to have been the perfect choice for the role, approaches it with at times an almost frenetic energy; you can sense a million nuanced emotions bubbling away beneath the surface, and he easily captures the wonder and excitement of the new experiences and sensations, and his heartbreak. DeHaan is an absolute tumult of emotions, with a performance that stabs at your heart – powerful and shocking. Foster, Huston, and all the supporting cast are solid.

Enticing, passionate and dramatic, Kill Your Darlings is a stunning first feature from John Krokidas and some of the finest performances from the two lead stars to date.