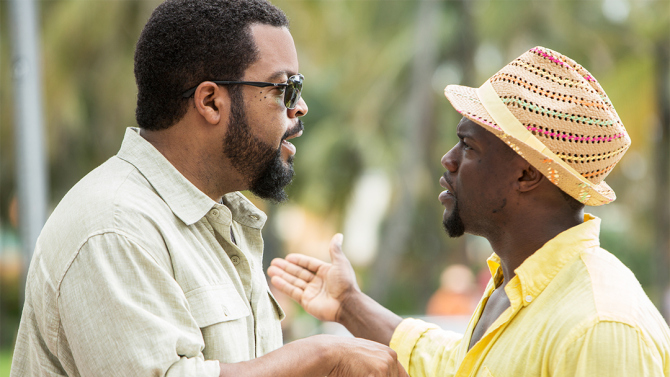 With the exception of Bobby Moynihan’s wonderful performance in the unfunny Sisters, Ride Along 2 is the funniest American comedy in a long time. That’s not too indicate that Ride Along 2 is particularly funny, or even particularly good. It’s neither. But during it’s one-hour and forty minute run time, there are more laughs than Zoolander 2, Trainwreck, Hot Tub Time Machine 2, Vacation and Get Hard combined. That’s not an exaggeration. When you see all the comedy films you begin to understand how bad all the comedy films are.

The difference is effort. That effort is almost entirely by virtue of Kevin Hart, who is an astoundingly natural comedian and far better than his output has hitherto indicated. Comedy by exuberance is often more trying than entertaining, but it works here. Not all of Hart’s attempts at humour are charming or funny. A lot of them aren’t. But some of them are, and there are zero charming or funny moments in Zoolander 2, also opening this week. There’s an inclination to imagine Hart’s potential given the right material. There’s the possibility that bad material is the right material for Hart. He might not know what to do with quality were it offered to him.

Awareness of the original Ride Along film is unimportant. Detective James Payton (Ice Cube) and Officer Ben Barber (Hart) team up, this time in Miami and against credulity, to uncover an impenetrable plot. The plot is meaningless though, and Ride Along 2 knows it, zipping merrily from action scene to Hart rant, to gratuitous female objectification. You know why you’re buying a ticket to Ride Along 2. But if you stumble upon it, or end up buying a ticket involuntarily, there’s something to be said for the mindlessness. At least this mindlessness generates a laugh here and there.

It’s an objectively poor film, and derivative of any number of buddy cop films. Rush Hour, 48 Hours, Bad Boys and Lethal Weapon all paved the way for Ride Along 2, and it’s worse than them all. Were it not for Hart, the cause would be lost. But it’s that effort. When was the last time you felt that Ben Stiller or Seth Rogan or Adam Sandler were really trying to make us laugh rather than make themselves laugh. Or worse, make themselves rich. Hart’s enjoying himself, but there seems a genuine desire to relay that enjoyment to an audience.

There’s a natural chemistry between the leads and their most immediate co-stars, Olivia Munn (as Miami cop Maya Cruz) and Ken Jeong (as hacker accomplice A.J.) This is brainless cinema but it’s not brain numbing. Let it wash over you and forget it ever happened as soon as you leave the cinemas. Sure, it’s not too much to expect quality, or a memorable experience, but if a film must be nothing then at the very least Ride Along 2 is an amiable nothing. Whether it be low expectations or the comparative low quality of its peers but Ride Along 2 is a more enjoyable experience than possibly anyone could expect. There are a lot of reasons to shower Ride Along 2 with blind disdain. Those reasons are valid.