“Winds in the east, mist coming in…like something is brewing, about to begin…”

If you’re like me, you’ll get a little shiver of excitement every time you hear those words, so what better way to open Saving Mr. Banks, the story of the creation of Mary Poppins, than with a haunting, quiet recital of the same lyrics? Mary Poppins is absolute magic, and the wonderful nanny has been a long time favourite of families everywhere (casting Julie Andrews as the woman herself probably helped a little!) It’s no great secret, however, that getting the movie off the ground at all was a long and difficult process – the author, P.L. Travers, was thoroughly against a film adaptation, let alone a Disney adaptation! Now the world is being taken behind the scenes in an intimate portrait of the very rocky journey to bring Mary Poppins to the screen. The question is, were Disney the right people to tell that story?

P.L. Travers (Emma Thompson) has been refusing Walt Disney’s (Tom Hanks) requests to turn Mary Poppins into a movie for near twenty years – she can’t stand animation, musicals, and least of all, Disney, and she has consistently refused to let him butcher her beloved creation. Financial troubles however, have left her little choice but to consider Disney’s offer, and so she flies to L.A. to meet with the man himself, the musical Sherman brothers (B.J. Novak and Jason Schwartzman as Robert and Richard respectively), and the Disney team. As Walt and Pamela (as Mr. Disney continues to call her, to her annoyance) butt heads, Travers reflects on her troubled childhood growing up in Queensland, as talk of the film brings back difficult memories…

“Saving Mr. Banks” could not be a more appropriate title – Mary Poppins, after all, is much more about the children’s father, George Banks, and about Mary saving him than it is about her whisking Jane and Michael away on colourful adventures. This film is not only about bringing that wonderfully written, endearing Mr. Banks to the screen; it is also about Mrs. Travers and Walt realising whom the story truly is about. It is a wonderful, heart-warming experience, to see Mrs. Travers – initially so paranoid and uptight – relax a little, first through her gradual friendship with her driver Ralph (Paul Giamatti), whose constant goodwill helps her open up a little, and then through her realization of how much of her own life and story went into creating the splendid nanny. 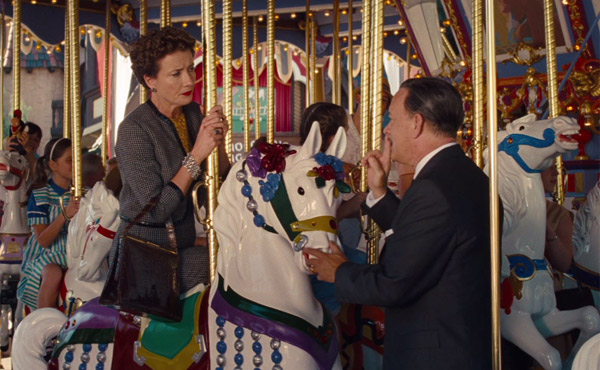 The flashback scenes to Mrs. Travers childhood with her banker father (Colin Farrell in a fine performance) smoothly flowed into the rest of the film and the gradual revelation of her life, if not quite surprising, is emotional and resonates deeply. Mrs. Travers could have so easily been made into a witch of a character, who would stop at nothing to halt the production of one of the most popular films of the 20th century, but the end result is far from it – it is a moving, well-written portrait of a complex woman and a complex relationship with one of the biggest names the movie world has ever seen.

Emma Thompson is perfect as the author – proper, a tad high-strung and a bit nervous, but ultimately kind, and very, very funny. Her bluntness when offering her opinions on the script, the songs, and the cast (not a Dick van Dyke fan it seems) bring some big laughs. Her friendship with Ralph, as previously mentioned, is one of the highlights of the film, but pair her with Tom Hanks, who falls so easily into the role of the big man himself it’s a almost unnerving, and you get some really golden moments of humour and warmth. Hanks’ Disney is warm and affable, but there is always the touch of the shrewd businessman, the man who gets his way.  It’s refreshing to see a little self-deprecating humour at Disney’s expense as well. One of the main worries going into a film like this is, ‘How much has the truth been twisted?’ Travers would never work with Disney again after the release of Mary Poppins and the ‘Disney sweetness’ kind of washes over this fact, but overall, the whole experience feels quite balanced.

Saving Mr. Banks is a warm, funny and refreshing. Working in all the songs from the musical will have you fighting the urge to sing along (or don’t fight it, it’s up to you) and you’ll fall in love with Disney all over again.