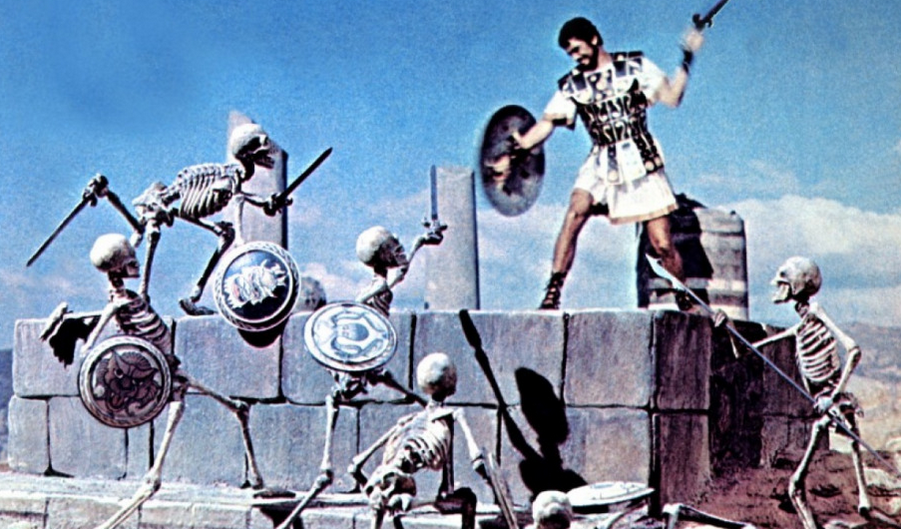 The stories of Greek mythology have been told and retold for more than a thousand years. Now they’re being retold through the medium of film. Purple monkey dishwasher.

Though it’s not the first of its kind, you could probably get away with calling Chaffey’s Jason and the Argonauts the grandfather of Greek mythology in Hollywood. What makes this film stand out amongst its contemporaries is Ray Harryhausen’s stop-motion animation, which was almost magical for its time. There’s a gigantic bronze statue coming to life, a reasonably convincing hydra, and a mob of hyperactive, angry skeletons, all of which have lengthy fight scenes with live action-actors. It’s a bit spotty sure, but it’s damn impressive in context.

The adaptation is faithful in its characters and setting, but makes heavy cuts to the story. Though it still strives to represent the classic ancient Greek trope of an arduous journey with severe casualties, it struggles with the meandering nature of Jason’s two-way journey to retrieve the Golden Fleece. The film abandons the return journey and mashes some of its more interesting events into the initial voyage, cutting off abruptly before what is arguably the most important part of the story – the tragic ending – an understandable issue of practicality, but one that leaves the movie lacking in narrative closure.

The film is unique for its no-nonsense live-action depiction of the gods. There is no grand attempt to live up to the image of Mount Olympus and the gods that the myth inspires in the mind’s eye; the gods are centre-screen, plainly dressed, unadorned by effects, and reeking of humanity and pettiness. Maybe the film gets away with this purely because any impressive visual from the period required a substantial suspension of disbelief. Still, it’s a rare cinematic window into the nature of the Greek gods, capturing the underlying character of Greek mythology in a way that films don’t seem willing to attempt anymore.

The Twelve Labours of Heracles (and beyond) | Disney’s Hercules (1997) dirs. Ron Clements and John Musker

In Greek mythology, Heracles was Zeus’ bastard child, born to a mortal woman named Alcmene and mercilessly plagued by Zeus’ vindictive sister-wife Hera for being the product of Zeus’ infidelity. Disney’s Hercules, however presents us with the nuclear family of loving parents Zeus and Hera and their adorable baby Hercules to keep family values intact. Instead, the film puts the task of villainy on evil Uncle Hades – who in myth is actually a fairly balanced and duty-driven character – arguably causing an entire generation to mischaracterise Hades as the Greek devil.

The film is best understood as an adaptation of the heroic myth in general. In fact, the film had to be renamed Beyond the Myth of Heracles in Greece because it was so unfaithful to its source material that it was considered culturally offensive. It does briefly introduce symbols from the original myth like the Hydra, but the rest of the film is more a Frankenstein’s monster made from other Greek myths filtered through a western image of heroism. The film’s Hercules is also made romantic and sensitive – a stark contrast to the gruff, boisterous, and womanising Hercules portrayed in Jason and the Argonauts. Disney’s Hercules seems more interested in creating a modern myth with a modern hero than retracing old stories.

The film also delights in juxtaposing its classical content with modern American music. All of the main characters get classic Disney musical numbers, and the archaic narrator in the film’s introduction is pushed out by five show-stealing muses who narrate via RnB, soul, and gospel. This all helps to liven up the dryness of Greek myth to suit the younger audience. Though Greek academics had a bone to pick with the film, calling it anti-educational and harmful to the international perception of their cultural literature, it nevertheless works as a great introduction to ancient myth and heroism in general.

Troy tackles one of the longest and most complex of the surviving Greek epics. The film does well to capture the pure scale of the Trojan War, and commits itself to accurately representing the fighting styles described in The Iliad. The central perspective changes slightly from the original – since Achilles’ destructive obsession with glory is too arrogant and vain to be sympathetic by today’s standards, it is cast in the film as his fatal flaw rather than his greatest virtue.

Like Disney’s Hercules, Troy depicts its protagonist as a standard Hollywood hero, complete with a heterosexual love interest and family values at heart. In myth, Achilles’ war slave Briseis is little more than a piece of meat with which he can gauge his glory; in the film, she’s the love of his life. And while the warrior Patroclus was Achilles’ implied lover in the myth, his cinematic counterpart is Achilles’ younger cousin. Considering the effort that Troy goes through to accurately portray Greek culture and the ideas around myth, these are arguably the less interesting choices.

One of the film’s biggest divergences is its lack of gods, since they play such a crucial role in the myth. Granted, the director’s cut of the film spans over three hours without them. But the film tends to make up for their absence, particularly in iconic scenes that hinge upon gods whisking fighters away before they die, by killing off characters who don’t die in the myth. This has a massive snowball effect on the story; by the end, the film seems to be doing its own thing entirely. In using up its resources so quickly and recklessly, the film also leaves little opportunity for a decent adaptation of The Odyssey as a sequel, which is a huge shame considering the film’s perfect casting of Sean Bean as Odysseus. It’s a good film about the Battle of Troy, but it loses the magic of myth along the way.

Though other films have adapted Greek myth in a modern setting, Black Orpheus takes its myth as far as possible from its origin. Set in modern times during The Carnival in Rio de Janeiro, Black Orpheus follows a man (who happens to be named Orpheus) and a woman (who happens to be named Eurydice) who meet and fall in love. The film’s characters and the audience are pointedly made aware of the myth and its significance – the idea that Orpheus and Eurydice are destined to be lovers and that their love is doomed to end in tragedy becomes somewhat of a self-fulfilling prophecy, and the myth plays out in a sequence of allusions and metaphors. The film’s analogy for Orpheus’ trip to the underworld to rescue his fallen lover is particularly clever.

The rich soundtrack provides an extra layer to the film’s connection to the myth, with the rhythmic festival music adding surrealism and intensity to crucial scenes, while Orpheus’ soft, blissful guitar-playing hints at the death-transcending beauty that Orpheus’ lyre inspires in the myth. This musical atmosphere helps the film retain a mythical feeling despite a distinct lack of supernatural elements; despite having no references to Greek culture or anything resembling the mythical elements of Orpheus and Eurydice, the film keeps the resonance of the myth without making huge changes to the events of the story.

Black Orpheus is also a fascinating mishmash of modern cultures and traditions. It’s set during a Christian festival with generic western influences, and its climactic samba dance is littered with symbols from African and Brazilian culture. Eurydice is pursued throughout the film by a man wearing a skeleton costume representing the western figure of Death, and the film continually draws on a sun motif that hints at universal themes of birth and rebirth. Even with its complete absence of Greek culture, the film works because it deals indirectly with the idea of mythology itself; above all else, Black Orpheus is an ode to the longevity and adaptability of mythology throughout different cultures and forms.