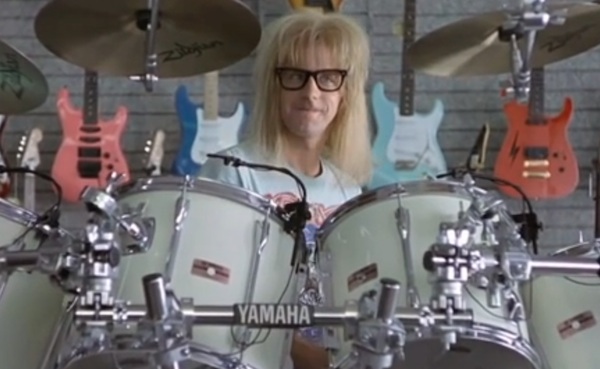 Damien Chazelle’s Whiplash was recently released and featured some of the most spectacular drum solo sequences committed to film. And who doesn’t love an awesome solo with cymbal crashes and lighting fast drum rolls? Here’s a look at the 5 Best Drum Scenes.

Step Brothers was one of the best comedies of 2008. At the end of the film, out of nowhere, Will Ferrell starts singing ‘Por Ti Volare’, intercut with scenes of John C. Reilly as a centaur and Ferrell as a lumberjack wishing to plant his seed (seriously if you haven’t seen the film what are you doing with your life). Reilly suddenly breaks out in a totally ballistic drum solo at the end of the song for no particular reason, and the result is one of the funniest music scenes in any film to memory.

Although the concept sounds like it would be an average film, Drumline turned out to be essentially decent sports movie, except with a drumline team. Similar to films like Step Up and You Got Served, Drumline features a number of drum sequences, including this early scene, which ends in an all-out brawl between the two schools.

Although this scene is technically from an episode of the show and not actually a film, it’s difficult to talk about drum solos without mentioning Animal from The Muppets. Animal is the crazy and wild drum player of Dr. Teeth and The Electric Mayhem (a fictional band from The Muppets universe), well known for stealing the show with his hyperactive drumming.

The Gene Krupa Story was a 1959 biopic about famous American jazz drummer Gene Krupa. Sal Mineo’s performance in this scene recalls some of the dance scenes from 1961’s West Side Story; you’ve gotta love the enthusiasm in his face when he performs the drum solo. Gene Krupa actually played the drums on the film’s soundtrack, and Mineo just performed over them. He still played like a maniac though!

The epitome of drum solos in film. Wayne’s sidekick Garth, who is awkward and doesn’t say much, harbours a number of hidden talents throughout the film. In this scene he sneaks off to a drum kit in the music store and casually rips out a gut-busting solo, with the only explanation for his skills being: “I like to play. *taps cymbal*”. Absolutely hilarious and in no way beneficial to the storyline, yet it is one of the most memorable scenes in the film.


Honorable mentions (these scenes didn’t quite fit the list’s criteria, but are still worth a mention):

Who doesn’t love a film about a drum-crazy rabbit voiced by Russell Brand? There’s no denying that this furry little mammal can drop a beat, and this scene may have made it into the top 5 if he wasn’t doing a drum solo over Taio Cruz’s ‘Dynamite’. That is pure sacrilege against the art of drumming, and no measure of skill behind the kit can forgive such blasphemy.

Will Ferrell and Chad Smith Drum-Off

This isn’t even from a movie.. but it’s too awesome not to mention. A drum off between doppelgangers (sporting the exact same outfit) Will Ferrell and the drummer from the Red Hot Chili Peppers Chad Smith. Obviously somewhat of a predetermined victory, but Will Ferrell puts up a decent fight!