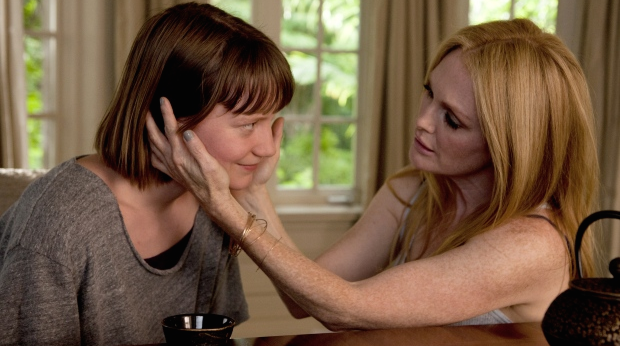 David Cronenberg’s Maps To The Stars affects vague concern toward unveiling some subversive satire regarding the Hollywood elite, but by and large has almost nothing particularly engaging to offer on the subject. The characters that inhabit Cronenberg’s film occupy weary stereotypes, and their behaviour is often so deranged that it’s difficult to occupy oneself in them, intellectually or emotionally. The filmmaker has often approached subjects with a sterile eye, but his best work encourages audience objectivity as a result of his detachment. The immense silliness of almost everything going on in Maps To The Stars largely means that objectivity leads to incredulity.

Fresh off the bus from Florida, the enigmatic and mildly disfigured Agatha (Mia Wasikowska) arrives in Los Angeles. Thanks to a bizarre connection to Carrie Fisher (Princess Leia to the layperson), Agatha has employment as a personal assistant for fading star Havana Segrand (Julianne Moore) quickly secured. Havana, an actress obsessed by her own former glory, as well as the superstardom of her deceased mother, attends sexually-charged therapy sessions with self-help guru Dr. Stafford Weiss (John Cusack), who barely seems to believe the nonsense he preaches. Weiss’ son Benjie (Evan Bird) is a Justin Bieber-esque child celebrity who’s undergoing a forced redemption after an image-regressing venture into the world of drugs. These characters interact and influence one another with little coherence and less credibility.

For someone so decidedly Canadian, Cronenberg is a curious contender for director of a film regarding a matter so inherently American as Hollywood – Maps To The Stars is actually his first film shot in the United States. Then again, had the film worked a bit better then the decision might have made more sense. Sometimes a certain detachment is beneficial in critique, but in Map To The Stars, it just serves to highlight just how ludicrous it all is. Is the eccentricity the point? Perhaps, but that doesn’t mean it’s a point well made. 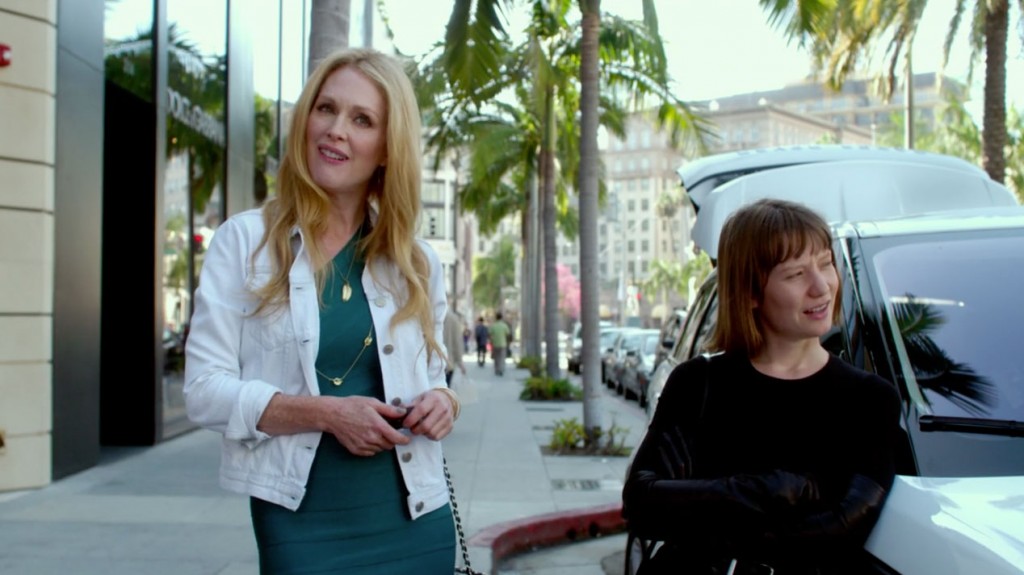 That the film remains somewhat engaging is a testament to Cronenberg’s own command of the medium, as well as the compelling central performances. Cusack as Weiss is an entirely ugly personality and yet the character is fascinating. Weiss is the kind of man who does not know his flaws, not because of ignorance but simply because he does not stop to consider himself. Agatha – the only hint of Cronenberg’s enthusiasm for mutilated flesh – is brought to life by a fascinatingly impenetrable performance by Wasikowska.

Maps To The Stars is a film that requires effort but perhaps does not deserve it. Any point that Cronenberg seems to be making has been made before and has been made better. The title of the film suggests a certain deciphering of celebrity, but there’s nothing in the film to imply that the behaviour of these characters, at least beyond superficial caricatures, reflects the rich and famous with any real authenticity.