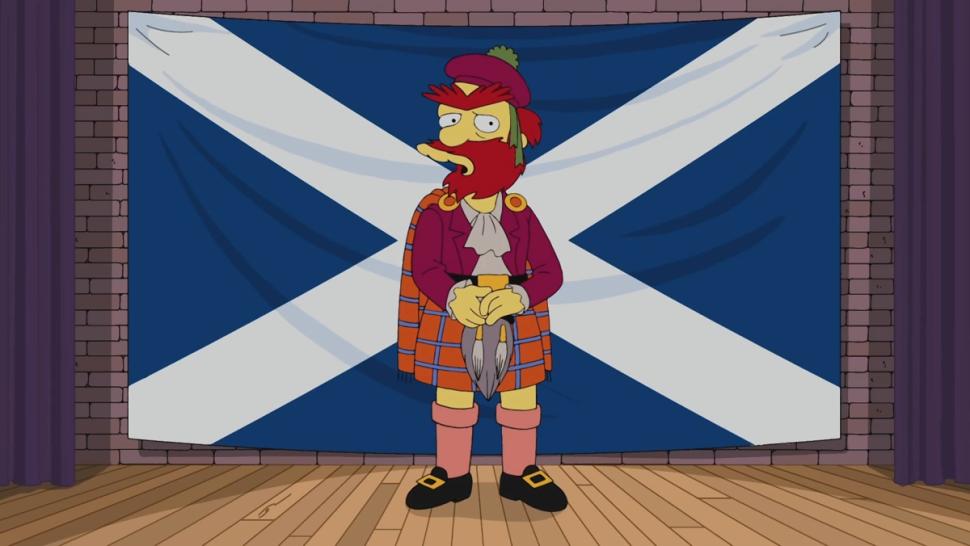 The Simpsons is the longest running animated television show in history and with 25 seasons and over 500 episodes under their belt there have been hundreds of memorable characters. This list focuses on the peripheral characters that have stood the test of time, not including any of the Simpsons nuclear or extended family, any ‘one-time appearance’ characters or any characters (or voice over actors) which have passed. With everyone having their own personal opinions on which characters are the best, this list has been difficult, even for a Simpsons aficionado like myself. I have tried to choose the characters which I have personally found to bring the most laughs. So without further Apu…I hope you enjoy reading this list as much as I enjoyed writing it.

Although a well-meaning guy, Hans Moleman may be Springfield’s unluckiest resident. Hans is short in stature, has cataracts, carries a cane and wears thick round glasses. Despite his shriveled, elderly appearance, he has admitted to being only 31 years old, as heavy drinking has ravaged his once youthful looks. Hans seems to get himself into many unfortunate situations including being the driver in many vehicular accidents, being gnawed on by crocodiles in a sewer and being buried alive in a cemetery simply because he “didn’t want to cause a fuss”.

Hans has been known to work as a prison librarian, a janitor, a mailman and was once the leader of an underground society of Mole-people. He pretended to be a freshman at Springfield University because he “just wanted a place to sit down”. He is the star of the short film, aptly titled, “Man Getting Hit by Football”. He was once brainwashed into thinking he was Marge and Homer’s son, as Homer remarked kissing his head was like “kissing a peanut”. His life can be summed up by his radio voice over appearance: ““Hello, this is Moleman in the morning. Good Moleman to you. Today part four of our series of the agonizing pain in which I live every daaaay”.

Dr. Nick is Springfiled’s resident quack medical professional who in his phonebook ad clams to be “just as good as Dr. Hibbert”. He studied at the prestigious Hollywood Upstairs Medical College and often spruiks his various medical services and inventions on television infomercial shows. Not only will he perform ANY operation for the low, low price of $129.95, but he has also patented such products as the Juice Loosener – which synthesizes one drop of orange juice from a whole bag or oranges; and the Sun and Run, the sunscreen which is also a laxative. With his trademark catchphrase “Hi Everybody!”, Dr. Nick has a friendly demaour and generally good bedside manner. He is always trying to help out his patients by giving them a ‘bargain’, unfortunately for them, this is often at the cost of having any knowledge of medicine.

Despite being a doctor, he has shady moral ethics, little regard for patients’ wellbeing and basically no medical knowledge. He is disgusted at the sight of blood, and when observing a medical textbook picture of a pregnant woman he exclaims “hey, that lady swallowed a baby!” He has also been known to perform surgery with kitchen utensil such as a pizza cutter, and a knife and fork from a seafood restaurant, which he previously “cleaned with his napkin”.

Cletus is Springfield’s stereotypical dimwitted, redneck character. He lives in a run-down shack with his family on the city’s ouskirts. He is married to Brandine Spuckler, who is not only his wife but presumably his sister/cousin/or some other blood related family member. The couple have at least 40 (known of) children with such choice names as Crystal Meth, Scabies, Incest, Dubya and Gummy Sue.

Although Cletus has worked as a moonshine manufacturer and dirt farmer he lives a fairly lazy life with no responsibilities. He is frequently seen bathing his children at carwashes, collecting (and eating) road kill and telling his ma to “get off the dang roof”. Cletus has no formal education, no eloquence and no shoes! Despite speaking in a hillbilly accent he has a lovely signature. He is blissfully unaware of the bigger problems around him and thus lives a generally happy existence. Cleuts done studied for years on how to get over the junkyard fence, only to learn that the gate was open. According to his own theme song, some folk’ll never lose a toe or eat a skunk, but then again Cletus will!

Captain McCallister is the stereotypical, salty ol’ sea dog of Springfield. The Sea Captain has corncob pipe, a sailor cap, a peg leg and two glass eyes, which may explain why he has been involved in so many maritime accidents – including crashing an oil tanker while drunk at the helm and directing a cargo ship full of hotpants into a lighthouse. When he isn’t on his sea legs getting into fights with sharks and giant squids or losing his Gameboy at the bottom of the ocean – he works in the Springfield Harbor taffy, ‘Call Me Delish-Mael’ and also runs a small academy for lobsters, which stresses stress tough love, daily chores and the like.

Admitting to “hating the sea and everything in it”, the Captain has released a CD of over 90 Sea Shanties including ‘Blow the Man Down’, ‘In the Navy’ and ‘Row, Row, Row Your Boat’. However, his main business venture is running his restaurant, ‘The Frying Dutchman’ which despite receiving a ‘D’ from the health inspector attracts plenty of customers.

Kirk is the balding, middle aged father to Millhouse Van Houten and the on-again-off-again husband to Luanne Van Houten. After being a ‘big wheel’ down at the Cracker Factory, he is promptly fired after his messy divorce from Luanne and his life falls apart. Kirk falls into a depression and is often seen crying about his miserable life. He becomes a stereotypical loser and deadbeat father and is forced to move into the Bachelor Arms Apartments, which has a high rate of suicides; although he proudly announces that he is now able to “sleep in a racing car bed”

Kirk tries to get his life back on track numerous times, becoming a sign spinner, and releasing a cassette tape of his single, “Can I Borrow A Feeling?”. But despite his education at Gudger College, things just never seem to go his way.

Joe Quimby is the slick, opportunistic, but horribly corrupt mayor of Springfield. Always putting his own interest first, his political career has been tarnished by many instances of fraud, bribe-taking, embezzlement and even using city money to build his own secret lavish swimming baths.

A composite caricature of the Kennedy family, Quimby frequently wears a ‘Mayor’ sash and is a smooth talking philanderer. Despite being married, he is “comfortable with his womanizing” and has numerous affairs with floozies and has fathered several love children. Despite his seemingly contemptuous attitude towards the citizens of Springfield, and his incompetence as a political figure, somehow he keeps getting elected. Joe Quimby – If you were running for mayor, he’d vote for you.

Gary Chalmers is the strict no-nonsense superintendent of the Springfield School District. He is a man of much authority and little patience and has a very strained relationship with Principal Skinner – made all the more awkward when he briefly dated Skinner’s mother, Agnes. Chalmers was born in Queens, NY, went to Ball state, then made the move to Intercourse, Pennsylvania. He is the proud owner of a Honda Accord.

On his routine visits to Springfield Elementary, some sort of disaster always seems to strike him – in which he blames Prinicpal Skinner with his trademark angry exasperation ‘SKIIIIINER!’ While fulfilling his work duties, Chalmers has had the misfortune of having his head trampled by a stampede of school children, being crushed by dogs and Scotsmen falling from vents, and mistakenly being called ‘Supernintendo Chalmers’. Despite his contempt for Skinner, at least he admits he “steams a good ham”.

Sideshow Mel is Krusty the Clown’s current sidekick and show-biz partner on the Krusty the Clown Show, after replacing Sideshow Bob – who tried to frame Krusty for armed robbery. Mel is a well-educated, poetic and eloquent entertainer, having attended Cornell University and speaking in a Shakespearean accent. He often does things in a melodramatic fashion. He has unique hairstyle – green locks with a large bone through it, which he admits got stuck in his hair after he tried to dig out gum with it. He also has a wife named Barbara.

Despite his intelligence and status, Sideshow Mel is routinely subjected to humiliating and physically painful tasks on the Krusty Show, such as being dragged through an obstacle course of pudding, pickle brine, refried beans and rancid eggy Béarnaise sauce. One time, Krusty cruelly pours liquid nitrogen down his pants and cracks his buttocks with a hammer.

Comic Book Guy is an obese, socially inept, sarcastic nerd who runs the The Android’s Dungeon and Baseball Card Shop. He is a 45-year-old virgin who still lives with his mother and is obsessed with all things computers, comic books, pop culture and science fiction. Comic Book guy holds a degree in folklore and mythology and is fluent in both N’avi and Klingon. His favorite TV/movies include Doctor Who, Star Wars and Stark Trek and is often seen dressed as characters from these at comic book conventions. He is also a member of MENSA having a ‘muscular’ IQ of 170.

His character is a meta representation of over critical Simpsons fans, being a know-it-all fan and often obsessing or nitpicking over minor details in comics, movies or TV shows. His declaration “Worst (noun) ever!” is used to register his disgust at anything he does not agree with. His prize possession is a bumper sticker which reads ‘My Other Car is a Millennium Falcon’, which was given to him by a Harrison Ford lookalike.

Groundskeeper Willie is the groundskeeper and janitor of Springfield Elementary School. He is originally from Northkiltown, Scotland and was “conceived, born and educated” on his parent’s pool table. A typical Scotsman, he has a thick Scottish accent and wild red hair, beard and moustache. Willie lives in a small wooden shack behind the school, which according to Principal Skinner, is the only place on school grounds which “falls outside all laws of Man or God”.

Willie likes his alcohol and is often seen swigging from a flask. He plays bagpipes and was once engaged to be wed to Sherri Bobbins, back in the old country – until she got her eyesight back. Willie enjoys secretly videotaping couples in cars – assuring us that “every single Scottish person does it!” He is quick to anger and likes to involve himself in physical fights, which show off his brawn and surprisingly muscular physique.